Startups founded a decade ago are only now entering the unicorn club, but those founded after 2015 have got there in half the time

A huge spike in mega rounds is producing unicorns at a fast clip in India; seven out of the nine startups that turned unicorn in 2021 were founded between 2015 and 2018

Not even four months into 2021 and India has already seen nine startups entering the unicorn club. While between January and March, three new startups had achieved $1 Bn+ valuation, the first nine days of April has seen six other startups joining the list. And it’s not just about the sheer number of new unicorns, but where they are coming from.

This year, we saw India’s first social commerce unicorn in Meesho, India’s first healthtech unicorn in the form of Innovaccer, while Pharmeasy became the first epharmacy to achieve this milestone. 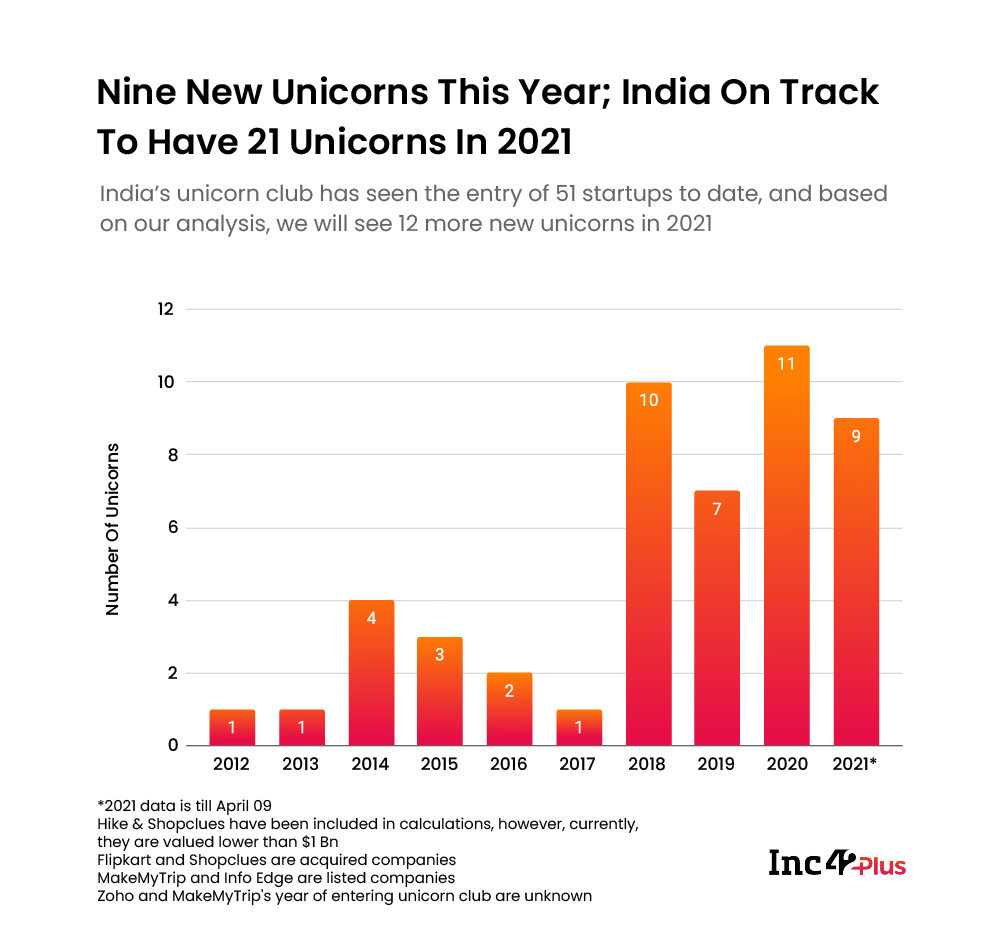 Starting Up To Unicorn: How Long Do Indian Startups Take?

In our earlier analysis in 2019, we had found the average time taken by startups to enter the unicorn club was seven years. But over the years, the average time to turn a unicorn has reduced. It is clearly evident that the new-age tech startups have been hitting the billion dollar valuation mark at a faster pace than their older counterparts. For instance, seven out of the nine startups that entered the unicorn club in 2021 were founded between 2015 and 2018.

On the other hand, startups such as Pine Labs, Info Edge, Druva and Dream11 which were incorporated before 2010, took roughly 10 years to become unicorns while younger startups such as BigBasket, Lenskart and OYO became unicorns in about six years on an average.

Fastest among the lot, Udaan, Paytm Mall, CRED and Groww just took three years on an average to enter the unicorn club. Typically, the average gestation period for startups turning into unicorns will reduce with the passage of time as market matures. In the Indian context, this drop in the average gestation period has been accelerated in the past four years, which can be attributed to the typical digital growth indicators such as the proliferation of smart devices, deeper internet penetration and the maturing internet consumer base.

More importantly, it’s also a sign of the confidence and the growing interest from the investor class, as well as the maturing of the entrepreneur ecosystem, with repeat founders being able to identify the right product-market fit and tapping their existing network of investors.

Where The Unicorns Are Emerging From

Just like in funding data, Bengaluru has emerged as the leading hub for unicorns with over 40% share in this aspect. Out of the 51 unicorns, 22 unicorns have set their base in Bengaluru. Close behind is Delhi NCR which is catching up with 17 unicorns.

The overall trend holds true for the new unicorns of 2021 with five out of the nine Meesho, Digit Insurance, Groww, CRED and Sharechat — coming from Bengaluru. Two of the unicorns come from Mumbai, while one from Delhi NCR. 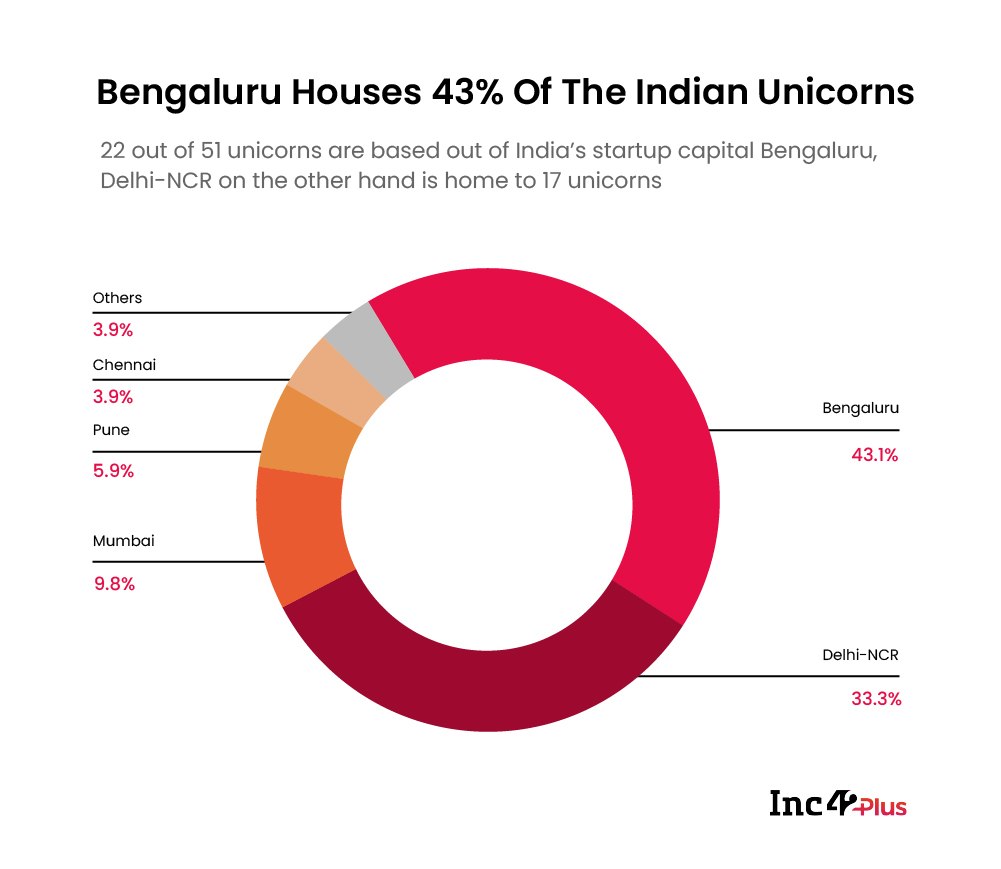 Which Sector Is Producing The Most Unicorns?

While ecommerce continues to lead the unicorn club with over 11 unicorns into the business, however, following closely behind are fintech and enterprise tech with 10 and 8 unicorns in the these segments respectively.

Fintech, ecommerce and healthtech have emerged as the trending sectors among the unicorn club. The nine new unicorns of 2021 include three from fintech — Digit Insurance, Groww and Cred — two ecommerce companies — Meesho and Infra.Market — and two more from healthtech — Innovaccer and Pharmeasy.

As per our analysis, we expect, the new batch of unicorns (also known as soonicorns) will be primarily coming from fintech (16) followed by consumer services (7) startups. 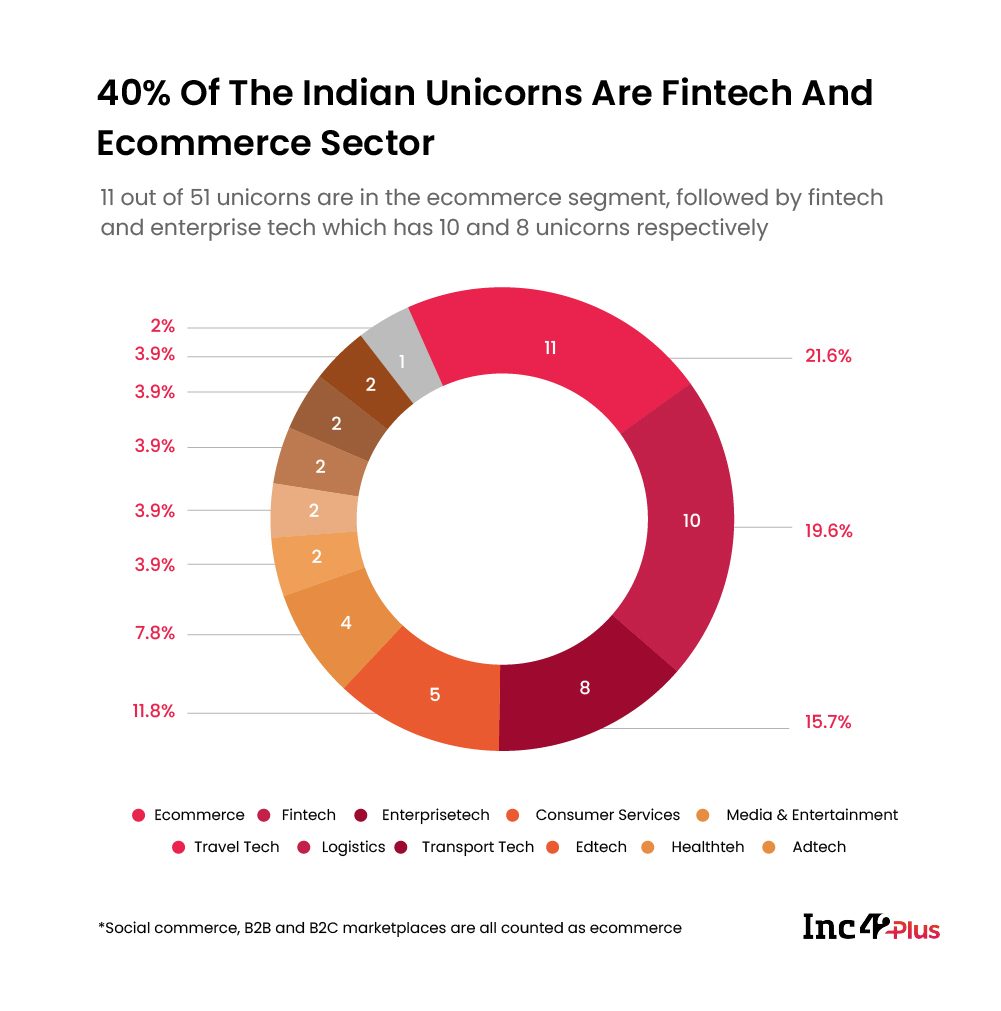 What’s Next For India’s Unicorn Club?

According to Inc42 Plus analysis, there are 50+ Indian startups that have the potential to enter the unicorn club by 2022. Looking at the current state of Indian startup funding which stood at $4.14 Bn between 1st Jan and 8th April (2021), and the mega rounds ($100 Mn+) recorded till date in the year, it is expected that India would see 12 more startups achieving a valuation higher than $1 Bn in the current year which would take 2021’s count to 21.

At this pace, India is likely to see 100 unicorns by 2023, much earlier than the earlier projection of 2025 as seen in the Inc42 Annual Tech Startup Funding Report 2020.