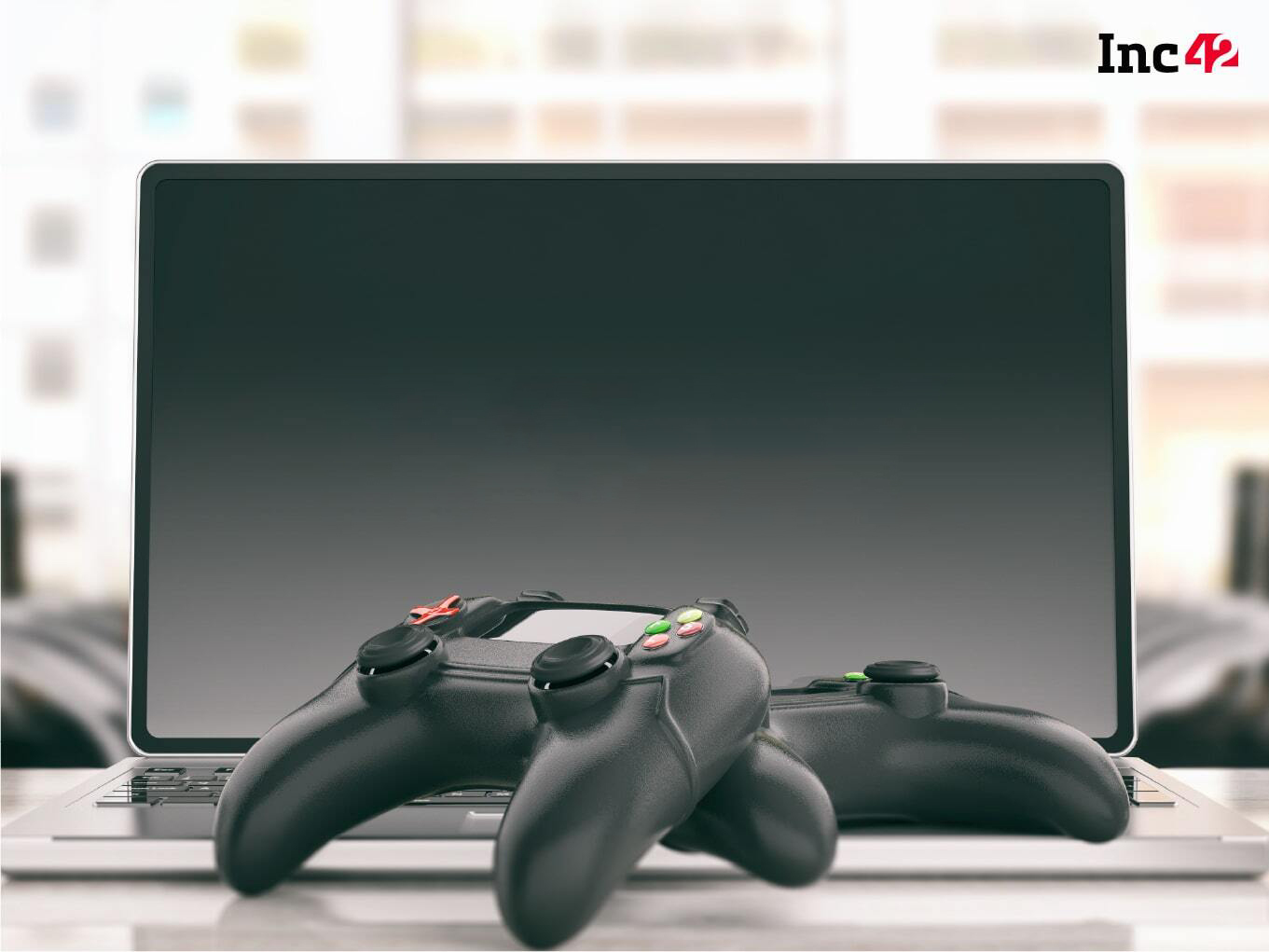 Despite India’s demographic advantage, monetisation has proved to be a big challenge in Indian esports just like in other consumer-facing sectors

India has a long way to go in making a mark on the global esports landscape as we saw in our previous analysis on the domestic esports market and how it compares to China and other countries.

Despite the positive and encouraging growth in esports viewership and gamer base, which have together nearly doubled from 2018, the early nature of the esports market is still something of a hurdle for growth. With a revenue share of around 9.8% in the global esports revenue in 2020 with a projected audience of 17 Mn by the end of this year, as per our analysis.

The low market share in revenue, however, has not been a deterrent to user growth. India is fast emerging as the next hot destination for esports games and companies, thanks to a combination of factors such as the rapid proliferation of smartphones, the emergence of esports cafes backed by tech giants, and growing interest among VCs and investors. But there’s no running away from the fact that there are some hurdles that are dragging the market down. This is down to a mix of policy and socioeconomic factors as well as the potential to earn money. 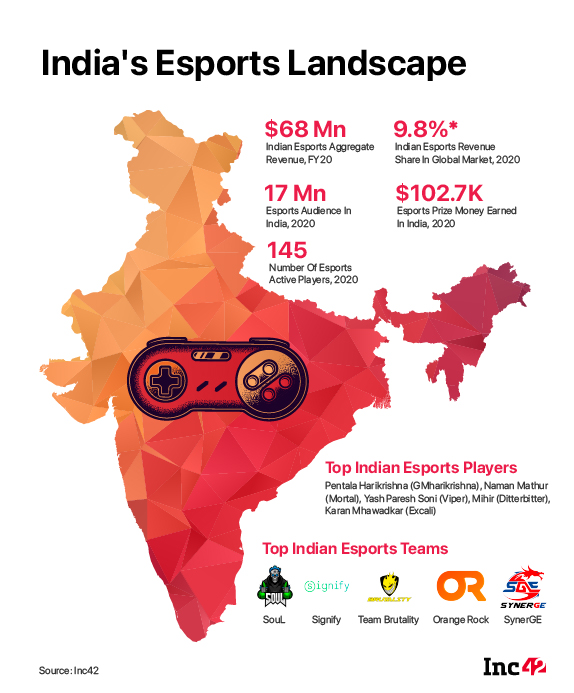 Among the encouraging factors for esports growth in India is the large favourable demographic, with more than 50% of the population under the age of 25 and more than 65% under the age of 35. These are the primary target groups for esports gamers and viewers, which bodes well from an engagement perspective. However, consumer spending during and preceding the Covid-19 lockdown has been less-than-encouraging and this could affect gaming and other entertainment-related segments which usually fall in discretionary expenses.

One can also point to India’s relatively slow internet speeds as a hurdle for esports growth. According to Speedtest’s August 2020 report, India was ranked 129 out of 140 countries in global mobile internet speed rankings despite the penetration of 4G mobile internet. There are, of course, other factors weighing down the esports segment.

Despite the massive popularity of PUBG Mobile in India and the growth in esports user base, there is no formal recognition for esports or a governing body for esports in India outside of multiple private bodies. Even though esports was a demonstration sport at the 2018 Asian Games, where India won a bronze medal, there has not been much of a push in the formal policy or from the sports ministry.

The growth in the segment is not just down to the efforts of esports companies — even corporates such as Airtel, Nvidia, Paytm First Games, Loco and a host of other startups have made strides in this space through partnerships. Private esports teams such as Fnatic India, Team Brutality (backed by Dell), and individual players have also increased the profile of esports in India. But much more remains to be done to give esports a push from the government side, which will also encourage investments in the field.

While most casual observers might not realise it, esports is not just about hitting a bunch of buttons on a keyboard or a controller to win games. There is a psychological aspect to the esports competition as well as the possibility of physical injuries such as repetitive stress injuries, eye, spine, or neck disorders as well as spondylitis and vertebrae-related injuries.

Just like any other athlete, esports players also need to maintain physical fitness as well as mental clarity and wellbeing. And that’s just not for everyone who is into video games — in other words, it takes years of work and dedication as well as money to train and be a professional and the careers are not too long in esports either as finger agility is a key factor.

Then there is the problem of excessive exposure to games, which can sometimes lead to gaming disorder. According to the World Health Organization, gaming disorder is characterised by impaired control over gaming, increasing priority given to gaming over other activities, and continuation or escalation of gaming despite negative outcomes.

While this is not something that will happen to every player, there are certain socioeconomic factors that might make individuals more predisposed to such disorders. 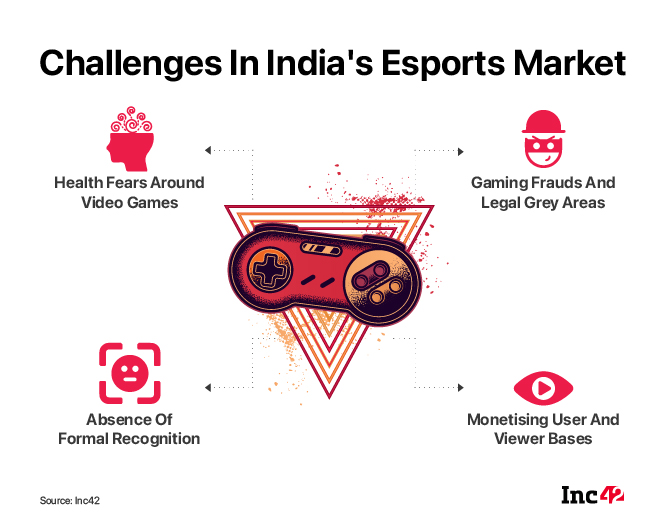 In economic theory, negative externalities are when consumption of a product (or its production) results in the harm caused to others. A clear example of this is cigarettes, but in the case of video games as well, there’s a component of harm to be considered, especially when there are rampant frauds in esports too.

Gambling games that involve real money or wallet-based buy-ins are among the worst offenders in this regard because often a player is not aware that they are actually playing a computer or a bot and not another player. Many games in India and abroad have used bots to boost engagement in games — including casual games that don’t involve any money.

On the other side of the spectrum are players and offenses here include match-fixing, manipulated speed runs, modded games used in unproctored tournaments, spot-fixing, e-doping, technical cheating, and software and hardware hacks. Even noted esports players have been caught in the act of cheating and the Esports Integrity Coalition (ESIC), founded in 2015, has been leading the way in mitigating such cheating in esports.

Beyond players crossing the line, some categories of games — such as games-of-skill and real-money gaming — are outright banned in certain parts of India, including in Goa, Sikkim, and Nagaland. Without much clarity on how to proceed for pan-India operations, gaming startups are naturally concerned about launching new products or features.

Finally, perhaps one of the largest hurdles along the esports highway is the potential for monetisation. As we mentioned, India has the right demographics for esports growth and a fast-growing base of young consumers. But monetising this user base has always been a challenge for Indian B2C startups and that holds true for esports too.

In esports, the value creation happens at the publisher level or at a developer level, and these entities primarily earn revenue through selling the game or in-game purchases. While most PC or console gamers in India pay to purchase games, the casual audience is more interested in free-to-play titles like PUBG Mobile.

Interestingly, PUBG Mobile’s revenue success in India is one of the few examples of in-app purchases working in the Indian market, and a lot of it has to do with how PUBG Mobile entered mainstream conversations and content, and how it took on somewhat of an aspirational quality among players.

For steady revenue from the Indian market across games, esports companies have to tackle the price-sensitive mindset of Indian consumers and convey a sense of value in in-game purchases just like PUBG Mobile did. Indians have a larger propensity to pay for physical products and goods than virtual ones — even though this is changing through the rise in subscription models.

Can Esports Speed Up Despite Hurdles?

On the positive side for esports, the market has got much-required engagement and adoption push due to the Covid-19 lockdown and the industry is expected to mature further once many of these bottlenecks are solved. As per Inc42 Plus analysis, the Indian esports market is expected to reach $175 Mn in terms of aggregated revenue by 2023, growing with a CAGR of 35.7% for the next three fiscals. So there’s definitely a big scope for esports to become a major contributor to India’s digital economy in the future.