According To Inc42 DataLabs, Binny Bansal Was The Most Active Angel Investor In The Indian Tech Startup Ecosystem In H1 2018

In our last article, we talked about the five most active VC funds of H1 2018. Today, we tell you about the top five angel investors. Before we share names, let’s take a look at some interesting trends around angel investor participation in funding in the first half of the year.

The data also revealed that between 2015 and 2018, 1,597 angel investors invested in the Indian startup ecosystem.

Here are the top five Angels who participated in Indian tech startup funding in H1 2018: 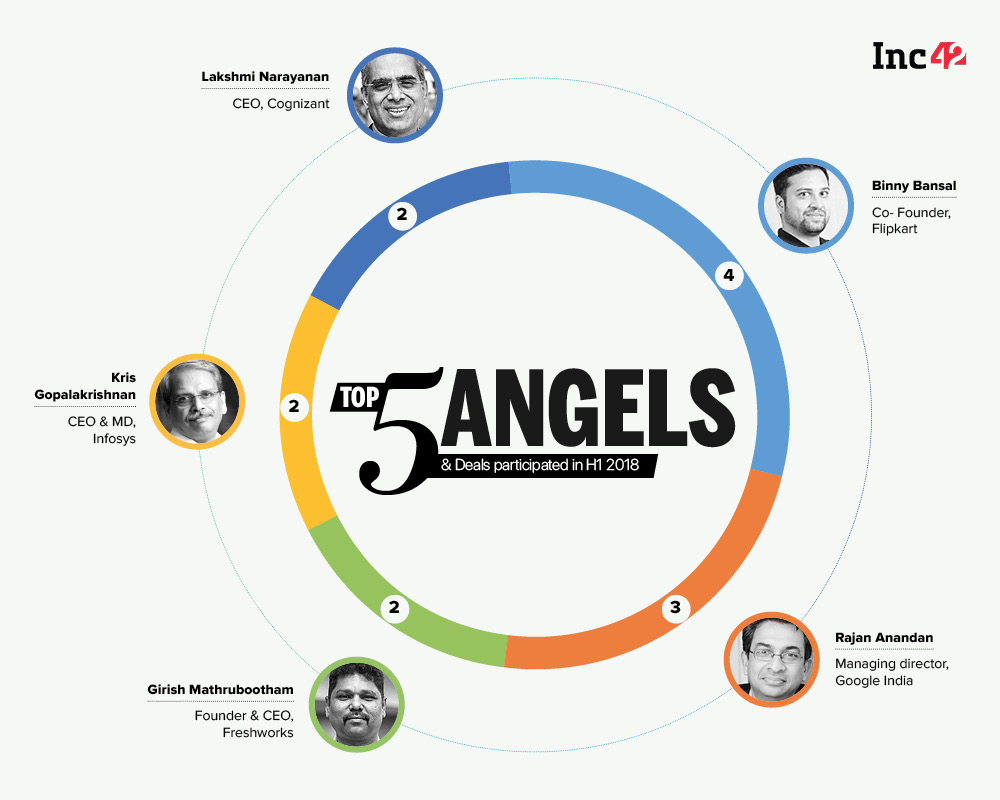 Flipkart co-founder Binny Bansal seems to have had a fantastic H1 2018 with the successful acquisition of Flipkart by global retailer Walmart for $16 Bn for a 77% stake at a valuation of $22 Bn. He has made it to the top of our Angel investors list with four investments!

The second spot was taken by Rajan Anandan, the Google India managing director, who has invested in a large number of startups. Anandan’s previous stints include managing director at Microsoft India for two years; he also worked for Dell India from 2006 to 2008.

He usually invests in Internet, mobile, and SaaS-based startups and seems to be keen on healthcare.

The third spot was taken by Girish Mathrubootham, the founder and CEO of Freshdesk, a cloud-based customer support platform that enables companies to provide efficient customer services. Mathrubootham was inspired to start the company after reading a comment on a Hacker News Post in 2010, which made him leave his job at AdventNet where he worked for nine years.

In the fourth spot was Senapathy Gopalakrishnan, popularly known as Kris Gopalakrishnan, the executive vice-chairman (former co-chairman) of Infosys, a global consulting and IT services company based in India. He is also one of its seven founders.

Gopalakrishnan was elected as the President the Confederation of Indian Industry (CII) for the year 2013-14. In 2014, Gopalakrishnan co-founded Axilor Ventures, a venture capital platform for young entrepreneurs.

In 2011, the Indian government awarded him with the Padma Bhushan, India’s third-highest civilian honour.

The fifth most active angel investor in H1 2018 was Lakshmi Narayanan, the ex-vice chairman and ex-CEO of Cognizant, a multinational IT services company. He was the CEO and president of Cognizant until 2006.

He recently served as chairman of NASSCOM (National Association of Software and Service Companies).