India’s Capital Vs The Startup Capital: Who Is The Torchbearer For The Indian Tech Ecosystem?

India’s Capital Vs The Startup Capital: Who Is The Torchbearer For The Indian Tech Ecosystem? 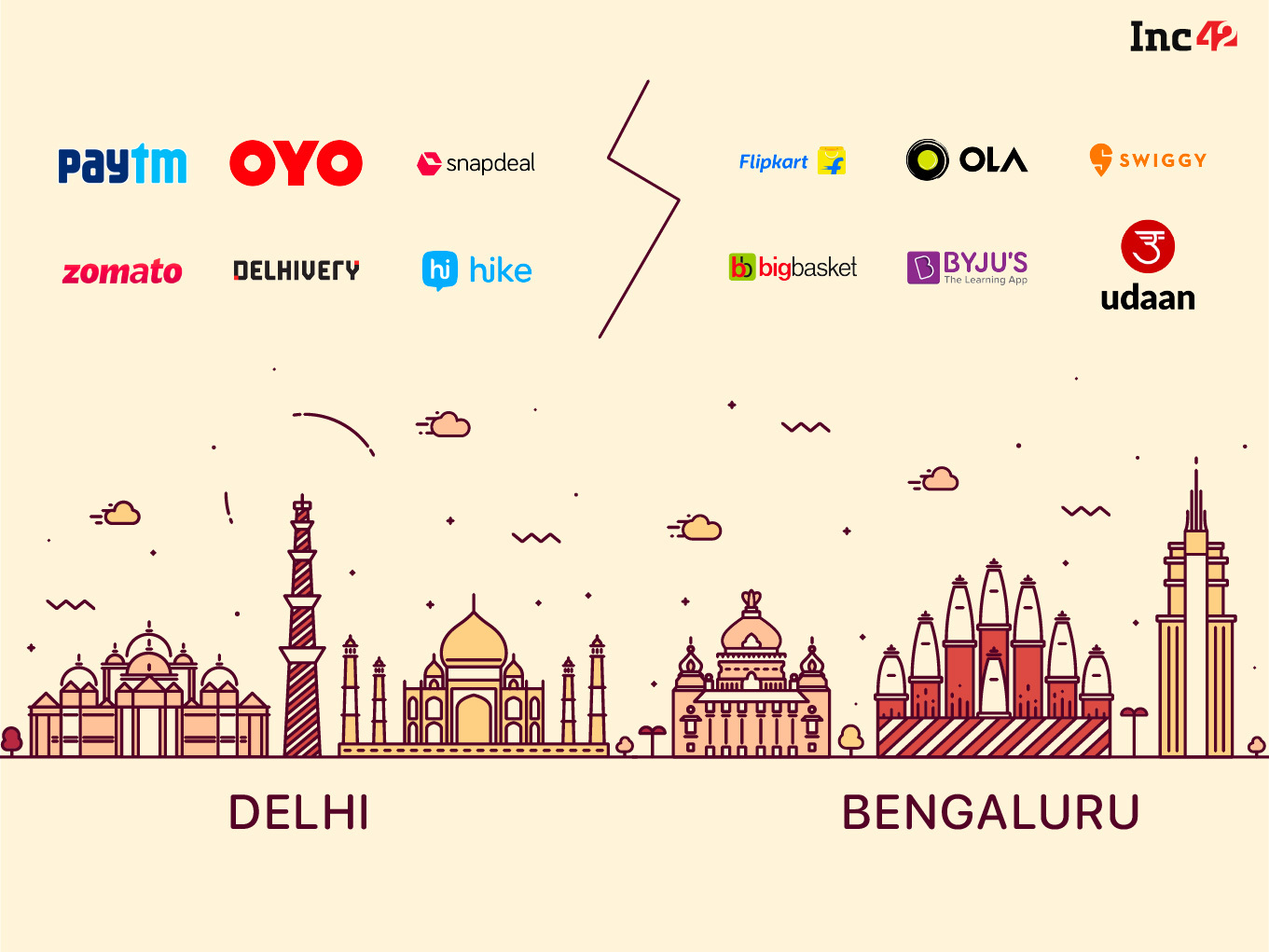 While Bengaluru has the overall lead in terms of funding since 2014, Delhi NCR has recorded a higher growth rate in startup funding

Is India’s national capital on track to become the startup capital by dethroning Bengaluru?

As the startup ecosystem in any city grows and flourishes, it also catalyses the modern socio-economic indicators such as technology adoption, innovation, employment and overall standard of living of the city’s residents. And if a city manages to create a sustainable startup ecosystem, it also often makes it to the global tech map given how closely knit the entire industry is.

A case in point is Bengaluru. Widely known as the Silicon Valley of India, the Bengaluru startup ecosystem has seen the launch of 11,000+ startups and has managed to attract a total venture capital inflow worth $28 Bn (between 2014 and H1 2020), the highest among any other startup hub in India. It also is home to India’s first billion-dollar-plus startup, InMobi, which turned unicorn in 2014.

There is no doubt that Bengaluru is still the epicenter of India’s startup ecosystem but over the years, Delhi NCR, and Mumbai have also outperformed the so-called startup capital in terms of growth in venture capital investments. From 2014 to 2019, the five-year growth rate of total startup funding in Delhi NCR and Mumbai was 23% and 27% respectively, whereas the same for Bengaluru was 13%. However, both Delhi NCR and Mumbai had a lower base than Bengaluru in 2014, so while the funding growth rate is faster, both still trail Bengaluru in overall funding amount in 2014-H1 2020. 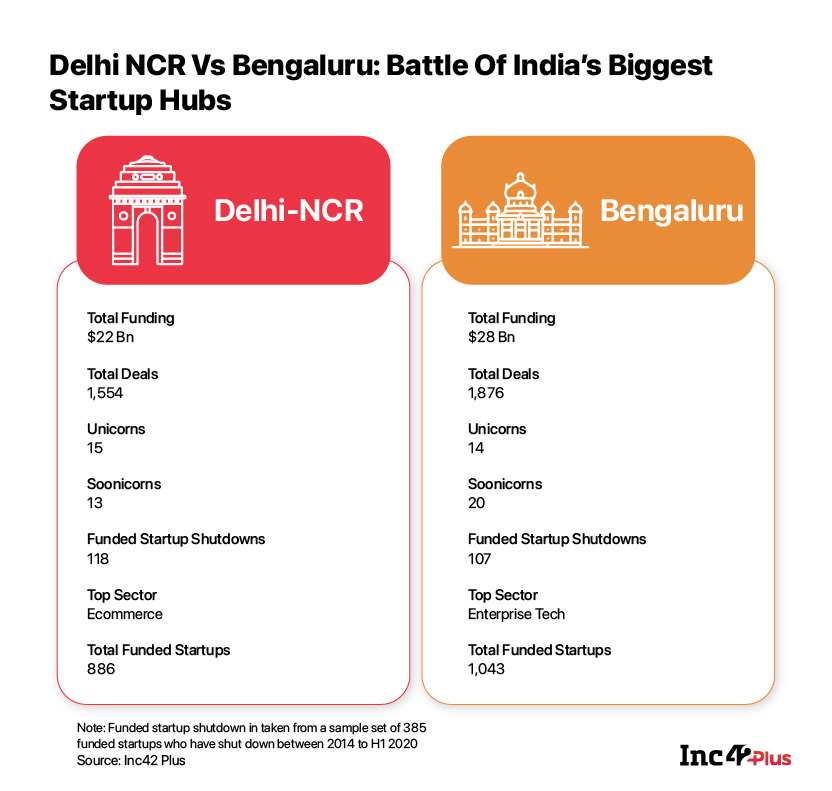 Bengaluru Vs Delhi NCR: Which Startup Hub Will Rule?

At the end of H1 2020, the total funding raised by startups based in Delhi NCR stood at $22 Bn, which is 21% lower than Bengaluru’s $28 Bn. But when we look at the five-year compounded annual growth rate of funding, Delhi NCR outpaces Bengaluru. 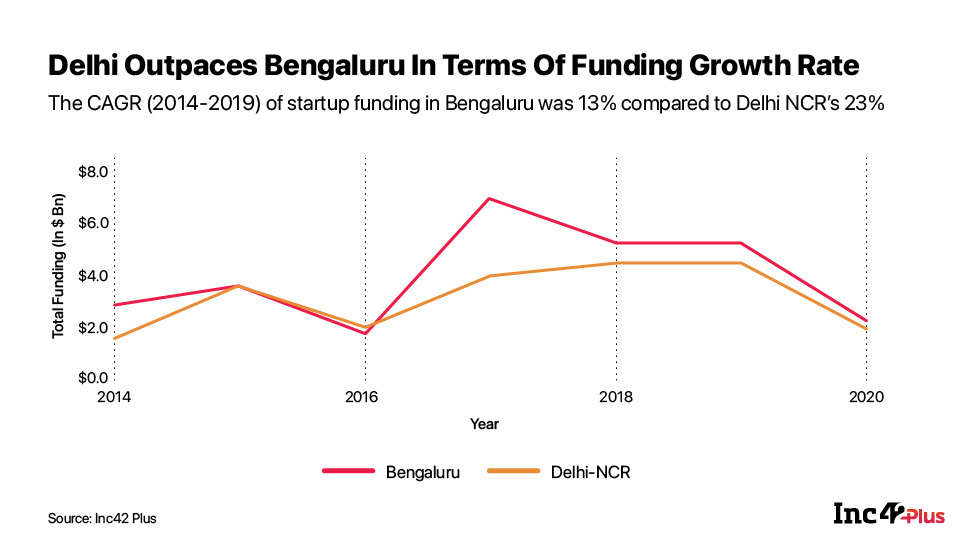 The combination of being a metropolitan city with dynamic infrastructure and being the power centre and the national capital gives Delhi NCR a competitive edge over Bengaluru in several regards including purchasing power and addressable base. This can be ascertained from the fact that Delhi’s per capita income i.e. $5,607 was 43% higher than that of Bengaluru’s $3,910, while Delhi NCR’s population is 46 Mn (2011 Census), compared to Bengaluru’s 8.4 Mn.

On the other hand, with a bigger technical workforce and much higher tech adoption rate among average citizens and businesses, Bengaluru continues to dominate the Indian startup ecosystem in terms of facilitating innovative startups in tech-intensive fields such as AI/ML, E-mobility, IoT and others. 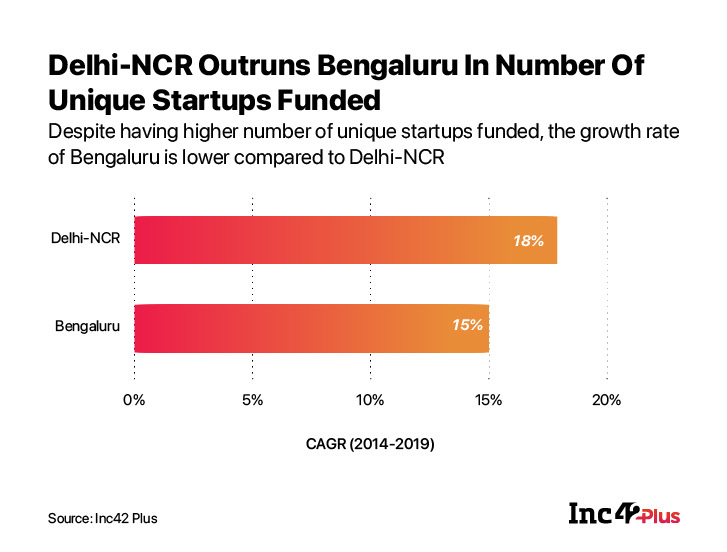 The Land Of Indian Unicorns: Bengaluru Or Delhi NCR?

Speaking of unicorns, Bengaluru had the enviable position of being home to India’s first unicorn when InMobi achieved its billion-dollar-plus valuation. That’s besides being home to the biggest startups in edtech, ecommerce, and foodtech — BYJU’S, Flipkart, and Swiggy respectively.

The rise of unicorns is a testament to a startup ecosystem’s ability and propensity to sustain a high growth streak of startups. But while Bengaluru had held the lead for many years, recently, Delhi NCR has caught up. With the rise of new unicorns such as Lenskart, Pine Labs, Delhivery in the past couple of years, Delhi NCR has surpassed Bengaluru, but that’s just when it comes to the absolute number of unicorns; Bengaluru unicorn startups are still the kings when it comes to valuation. 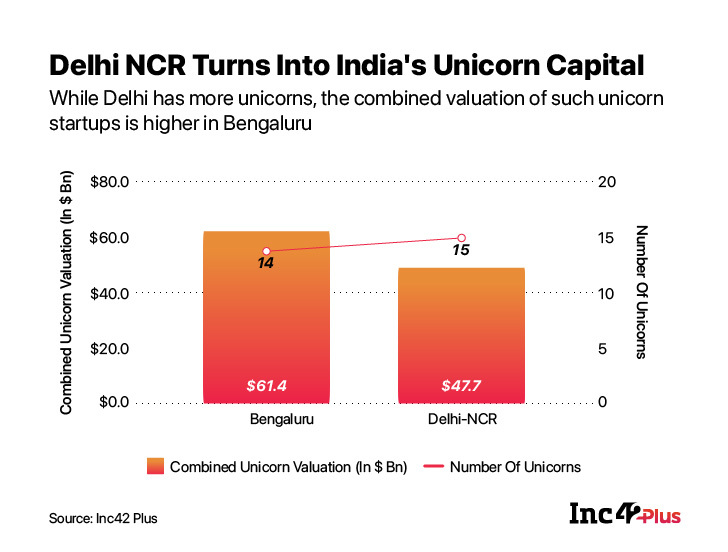 Overall there is ample evidence that Delhi NCR is by far the biggest competitor for Bengaluru for the startup capital crown. In our latest release, The State Of Indian Startup Ecosystem Report 2020, we have covered all the emerging as well as established startup hubs in India to capture the changing time in the Indian startup ecosystem.