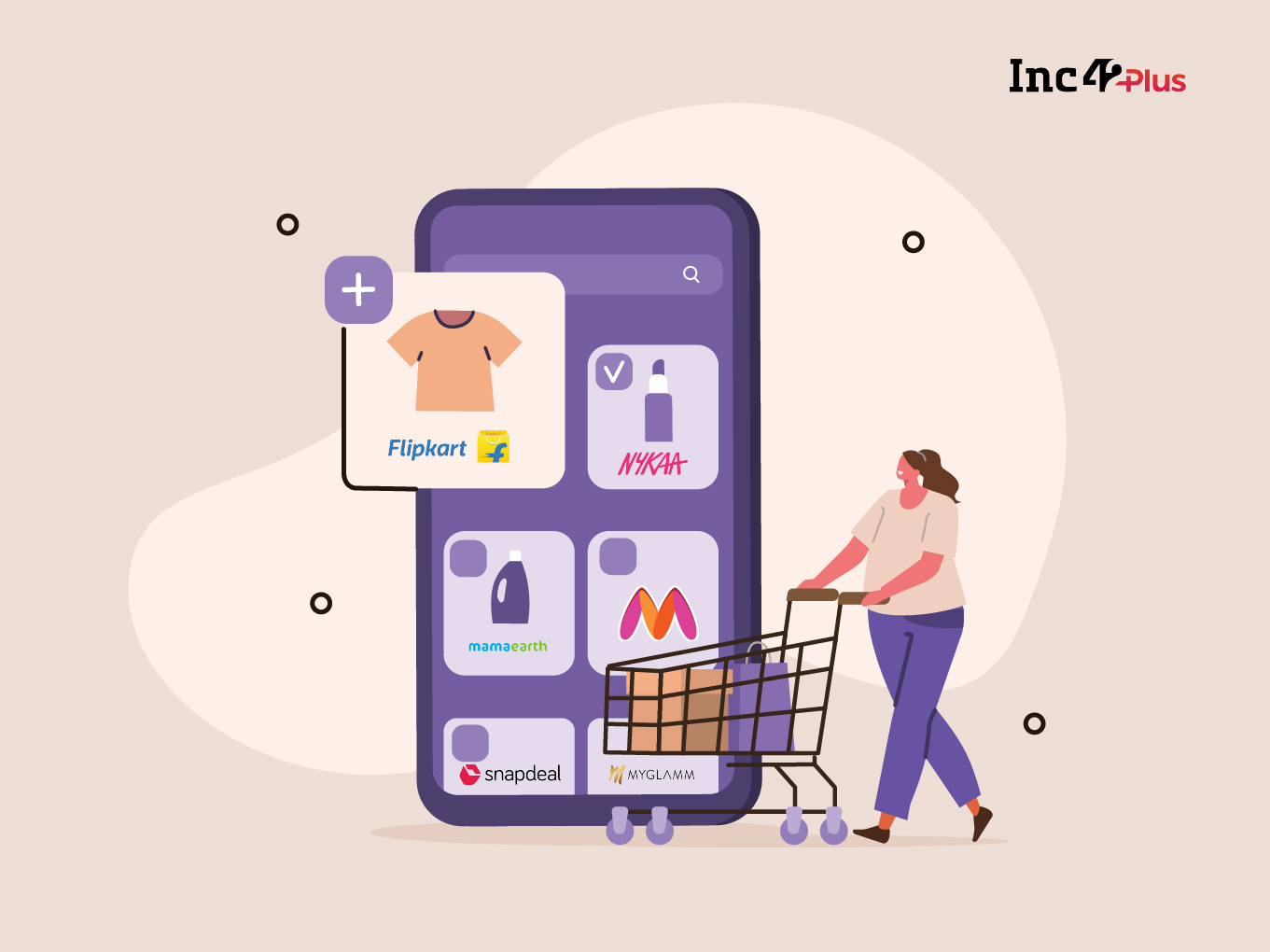 Driven by the rise in digital infrastructure, ecommerce in India is set to reach $200 Bn by 2026

With online sales witnessing a 23% jump in gross merchandise value (GMV) and clocking $9.2 Bn during the 2021 festive season compared to $7.4 Bn recorded in the previous year, the ecommerce industry continues to rise and rule a post-pandemic India.

The ecommerce sector in India is currently at a late growth stage due to the presence of multiple players and the emergence of new models such as direct-to-consumer or D2C, the Thrasio model of consolidation and growth and the rapid rise of social commerce. Besides, the country is home to more than 4,658 ecommerce startups, accelerating the advantages they can bring in the consumer retail segment and digital commerce models.

Given the exponential growth and massive potential, this space has attracted strong investor interest. Funding in the ecommerce sector grew by 600% in the first nine months of 2021 compared to the previous year. 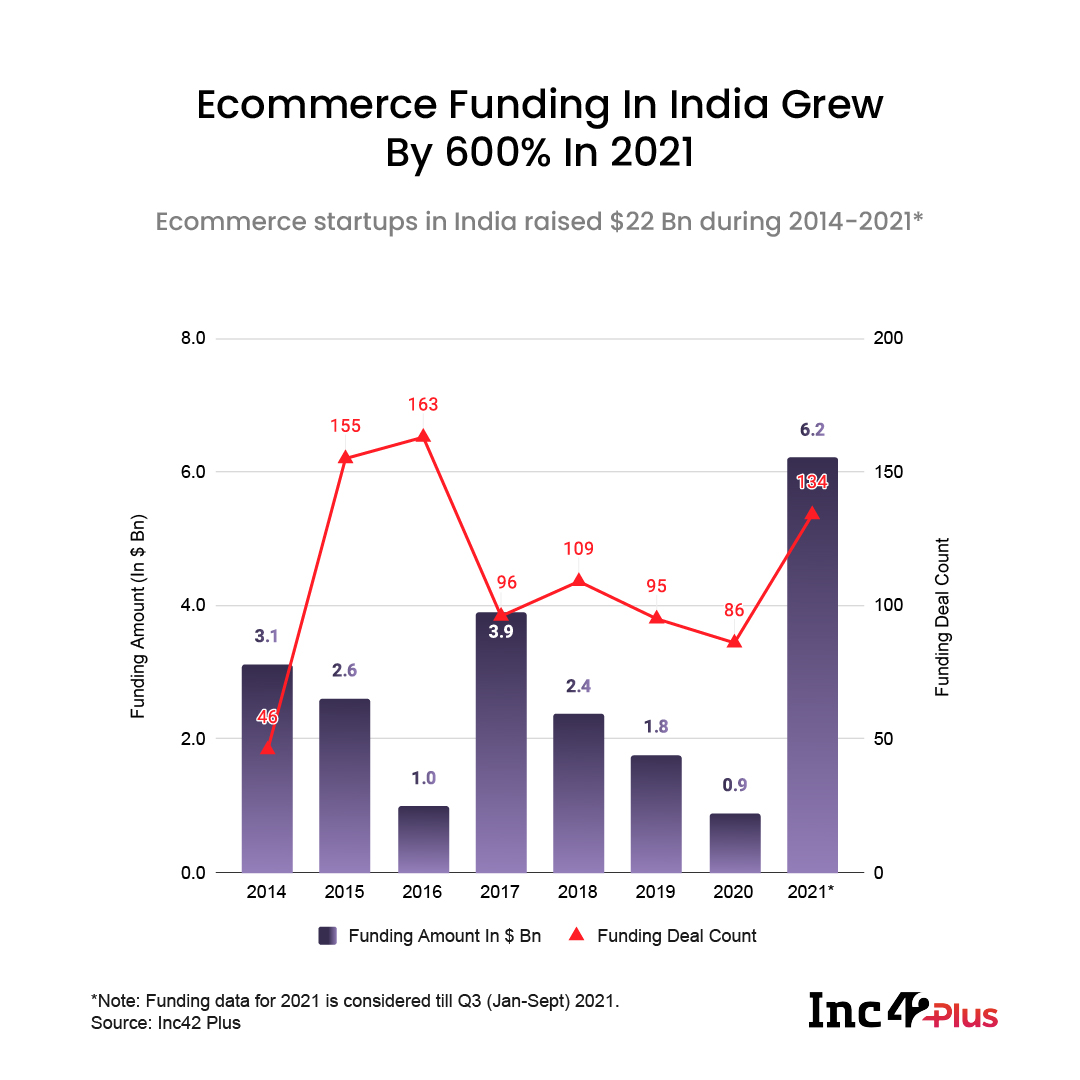 Driven by government initiatives, a rise in the internet and smartphone penetration, an unprecedented growth in the number of online shoppers and the increasing popularity of the D2C model, the Indian ecommerce market size is estimated to reach $200 Bn by 2026, according to the latest release by Inc42 Plus, titled Decoding India’s $200 Bn Ecommerce Opportunity: Market Landscape Report, 2021

CHECK OUT THE REPORT TODAY 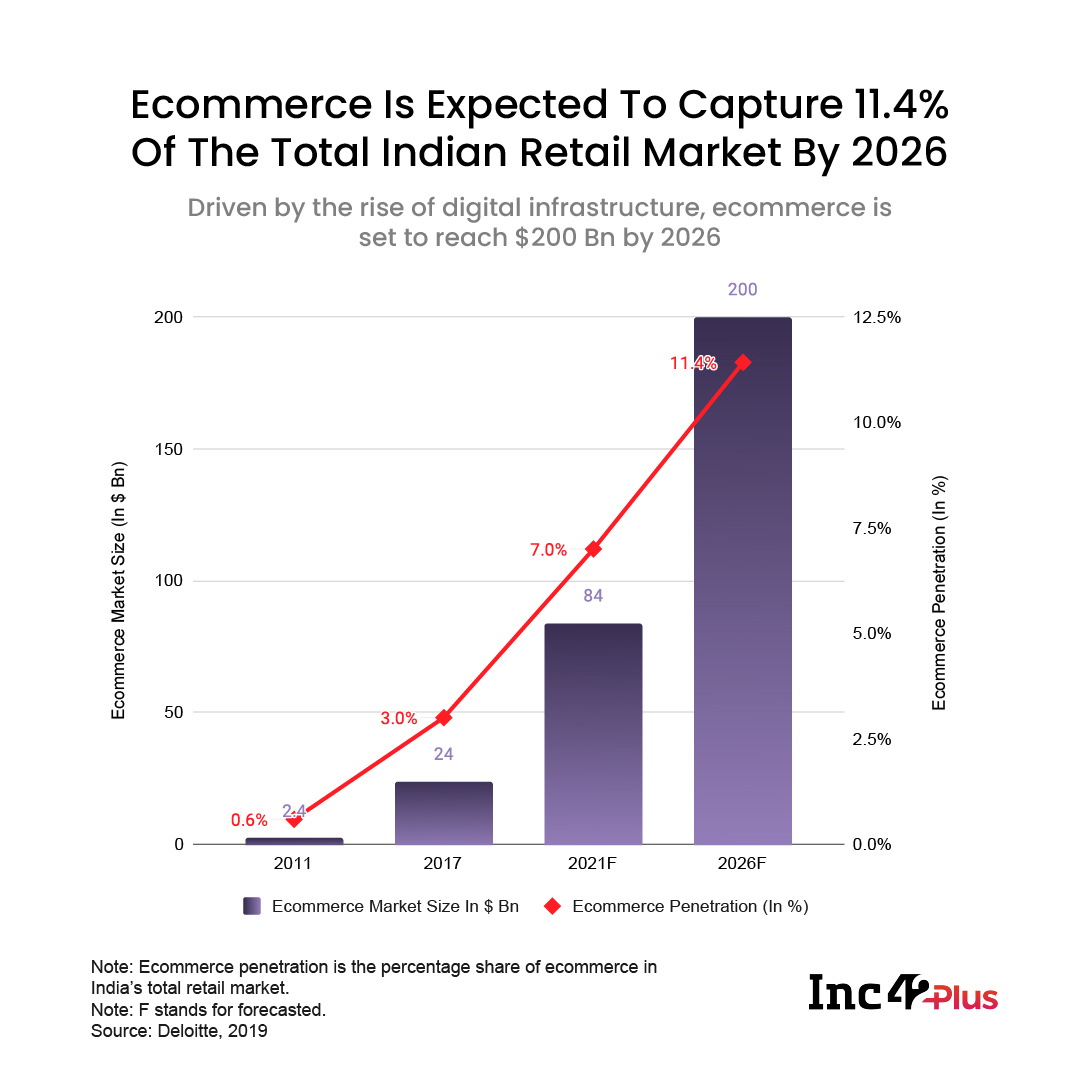 Rise Of The Digital Infrastructure

In the past couple of years, the growth of smartphone and internet usage has accelerated digital adoption in every walk of life. Overall, internet penetration in India grew from 58.5% in 2020 to 62% in 2021. Although the number of urban internet subscribers is 1.5 times of rural subscribers, the latter is growing faster on a YoY basis. 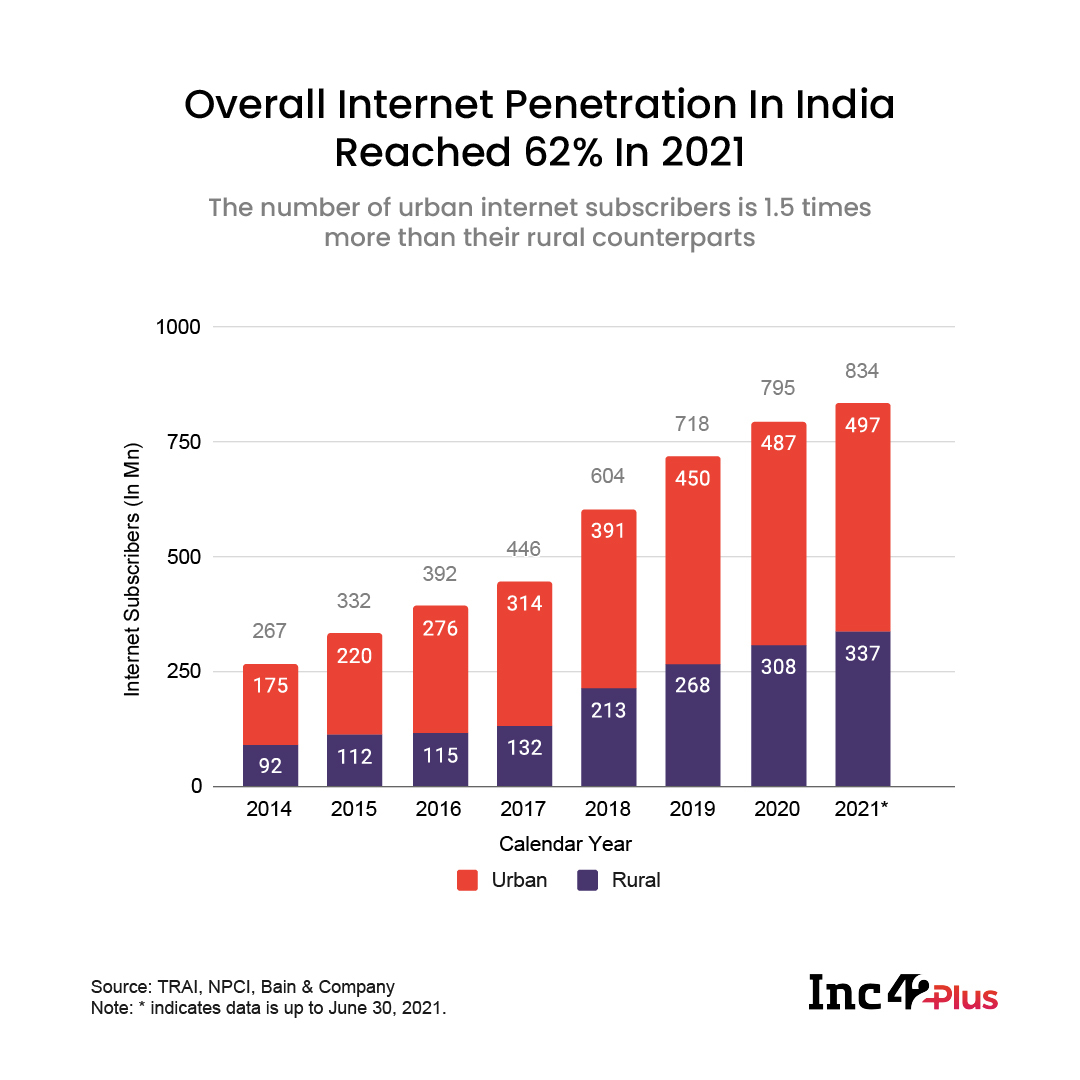 With the ease of access to digital infrastructure, there has been a rise in the number of social media users. According to the Ministry of Electronics and Information Technology (MeitY), there were 448 Mn active social media users in India in February 2021. The growth of social media users has also paved the way for new business models in the ecommerce sector. Social commerce and live commerce (video commerce) have gained popularity in the past few years as people tend to spend more time on social platforms and consume more content. 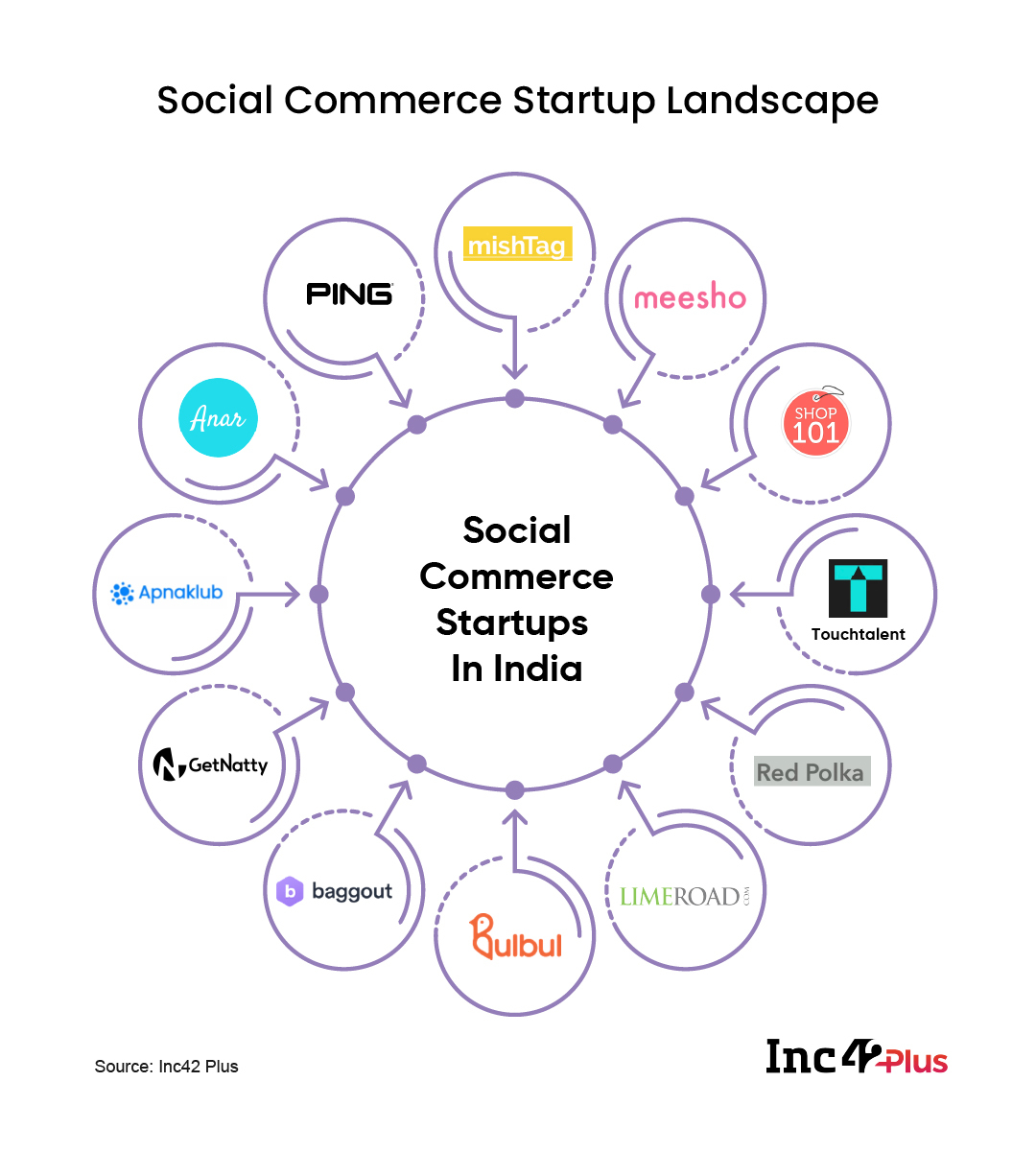 Overall, emerging trends like D2C growth, the emergence of Thrasio-style startups, the rise of online shoppers and the increasing popularity of content commerce are shaping the ecommerce landscape in India and pushing the sector’s growth. To know in detail about the emerging trends in the Indian Ecommerce Market, download the full report here

CHECK OUT THE REPORT TODAY