Regardless of the geography or market, steady income for consumers guarantees higher social security and spending in the market. This is the primary theory behind capitalism and is meant to incentivise labour, industrial production, manufacturing and the service economy. Income or salaries are a basic indicator of the overall development of an economy. But beyond this, the two foundational needs in Maslow’s hierarchy of needs— psychological needs and safety needs — rely heavily on steady income provided by stable employment.

In order to utilise this massive base of human capital to its full potential, it is necessary to enable wider employment creation across India and across sectors. In his book— The Rise And Fall Of Nations — contemporary economic analyst Ruchir Sharma argues that countries that witnessed unprecedented growth after the end of World War II (6% for at least a decade) had an average growth rate among the working-age population of 2.7%. So now, more than ever, India needs to capitalise on the employment opportunities that it can create for its massive working-age population.

On the contrary, since the Covid-19 pandemic hit India, we have witnessed unprecedented growth in layoffs, salary cuts and hiring freezes. This unforeseen event has upended the reality for businesses at large,

In our latest report — The COVID-19 Startup Impact Report — Threats & Opportunities For The Indian Economy 2020 —- we have recorded that 31% of VC-backed startups in India undertook workforce downsizing in Q1 2020. The layoffs and pay cuts are not only limited to startups but also in the workforce in traditional institutions such as MSMEs, corporates and other organisations.

In his famous remark, the former US president Harry S Truman said — “It’s a recession when your neighbour losses his job, it’s a depression when you lose yours.”

Given the current scenario, we can only hope we don’t hit a depression as a result of a prolonged recession. 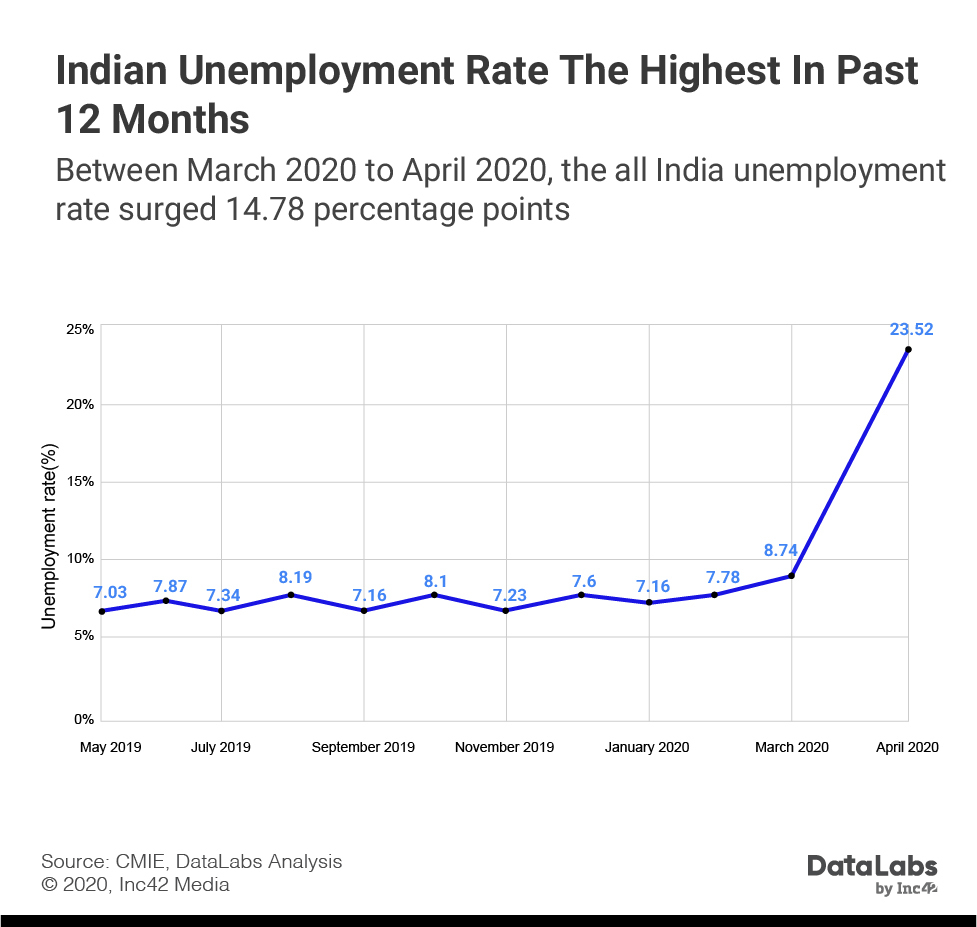 A systematic disruption in an economy impacts the daily wage earners and MSMEs the most, which together is estimated to be a population of 402 Mn. As per ILO estimate done on 2011-12 census, wage earners accounted for 48% or 195 Mn of this, with the rest made up of the self-employed, primarily MSME.

Out of the total 195 Mn wage earners, 121 Mn (or 62%) are casual daily wage earners whereas only 74 Mn (38%) are salaried employees. The is one major indicator of how destructive job losses can be for the overall Indian economy. Layoffs, Salary Cuts and Hiring Freezes: The Story Of Indian Startups In 2020 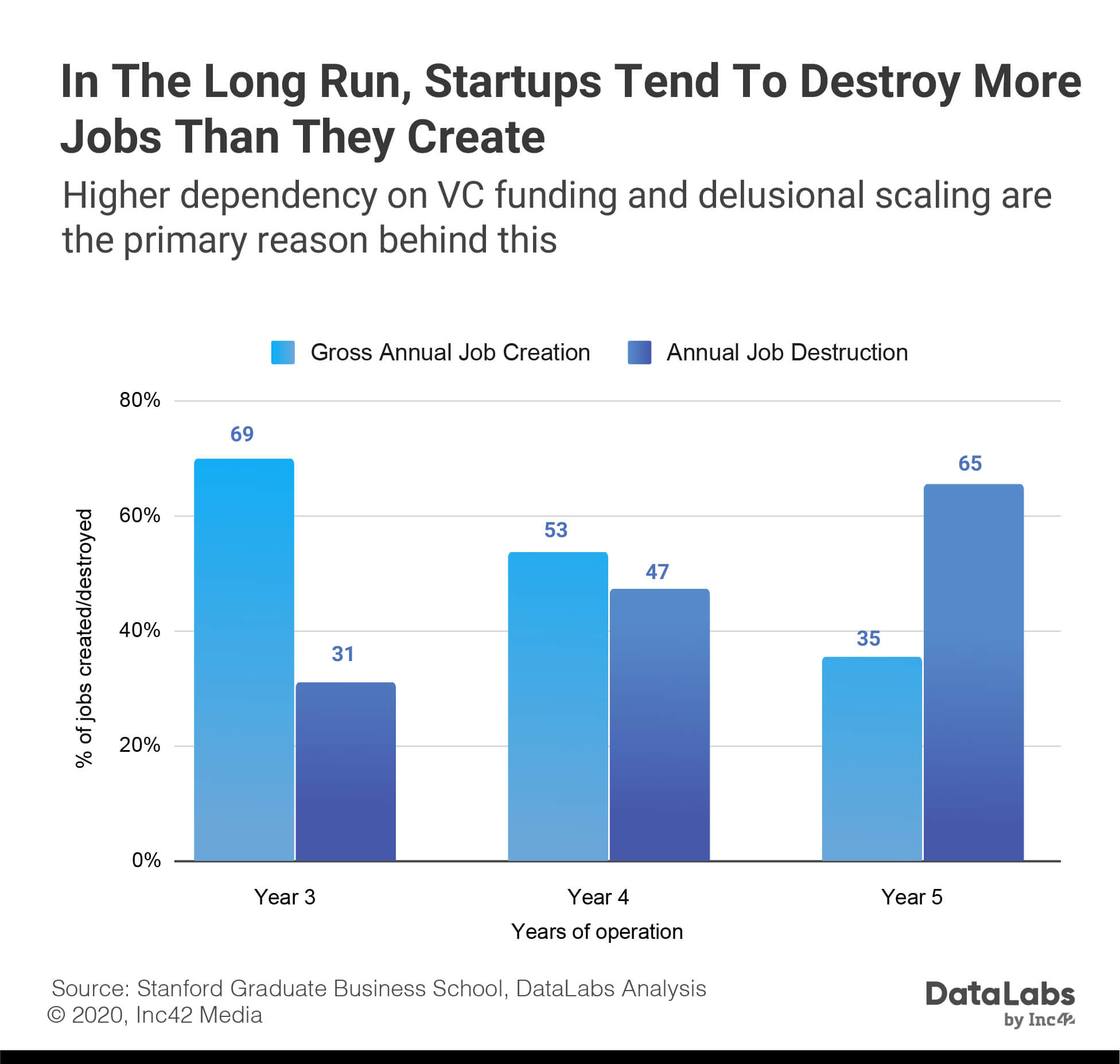 The sustainability of jobs created by the startups during their blitzscaling spree has always been a big question mark. A Stanford study by Prof George Foster on a dataset of 158K startups (mostly early and growth stage) worldwide concluded that in the long run, startups destroy more employment opportunities than they actually create. This is quite evident in the context of the Indian startup ecosystem as well, we have seen large-scale layoffs by Indian unicorns even when the market conditions were favourable.

The uncertainty with regards to the availability of venture capital is a primary reason for startups delving into layoffs and pay cuts. At a time where even the venture capitalists are finding difficulties in raising capital from their limited partners (LPs), it would be relatively harder for startups with very low EBITDA and high operational expenses to raise next round of funding. However, when startups from sectors such as hospitality, travel tech, shared mobility, coworking and foodtech are witnessing an unprecedented drop in their revenues, sectors such as digital media, online gaming, essentials delivery, remote workforce management and video conferencing are witnessing a boost.

Overall from an economic perspective, this is a pure-play Schumpeter’s gale also known as creative destruction — a popular theory from the Austrian school of economics which states that a process of “industrial mutation that incessantly revolutionises the economic structure from within, incessantly destroying the old one, incessantly creating a new one.” In other words, obsolete sectors and industries shut down, and pave the path for new sectors.
In other economies, businesses have received some indication of the stimulus package they can expect. For example, the United States Paycheck Protection Program (PPP) is a loan designed to provide a direct incentive for small businesses to keep their workers on the payroll.

The Indian government is yet to formulate a similar strategy for softening the impact of the pandemic shock on SMBs and startups. So far the major $22.6 Bn relief fund is primarily targeted towards farmers and daily wage earners.

Another problem with implementing something similar to the PPP is that such an initiative could worsen the NPA (non-performing asset) problem in the Indian financial market. The ill-monitored sanctioning of MUDRA loans has already raised concerns of an already unacknowledged NPA crisis in the market.

Given this, Indian businesses have not been able to cut costs without reducing their employee burden. If and when the Indian government announces a stimulus package, the incidence of layoffs in the Indian market may reduce. That’s one of the biggest concerns that businesses in India have raised with the government in their dialogues about reviving the economy and getting job-creation back on track.

DataLabs’ The COVID-19 Startup Impact Report — Threats & Opportunities For The Indian Economy 2020 brings an unprecedented deep-dive into the impact and the trends in the wake of the pandemic, beyond job losses and in how startups have pivoted and changed their models to adjust to the new reality.