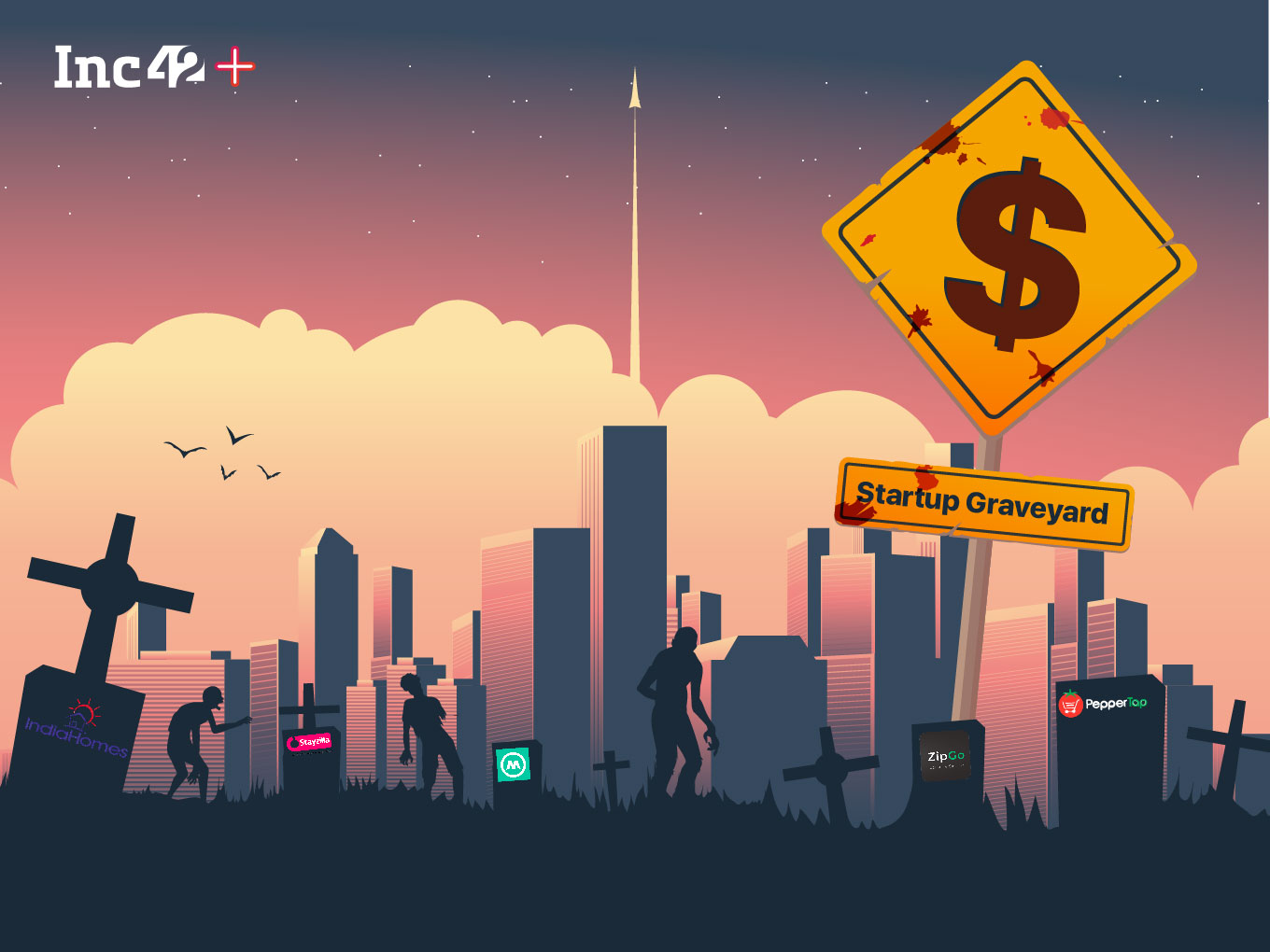 With venture capital investments plummeting drastically in May 2020, the pandemic-induced recession is expected to drive up closures

While the year began with hope and optimism about the new decade for businesses around the world — the pandemic has left many ventures and startups with little or no cash left to operate. In the case of tech startups in India, the pandemic has been a boon for the ones operating in essential services to a certain extent, but the overall impact has been profoundly negative and something no one was prepared for.

As a result, shutdown, layoffs and salary cuts in the startup ecosystem are becoming more and more prevalent — with each week resulting in more job loss or startup shut downs. As per a recent study by DataLabs by Inc42+, the average percentage of layoffs in the total workforce in Indian startups is 22%. Pay cuts and downsizing measures are usually taken when the outlook is bad, but this is perhaps worse than any other bleak scenarios.

With VC funding narrowing significantly and greater demand for EBITDA positive businesses even in a crisis, the Indian startup ecosystem has abandoned the long-held cash-burn approach for a more financially sustainable strategy. But the question remains, how many startups are actually going to survive this transition?

Out of all the gloom-ridden predictions about the future of the Indian startups, one that horrifies the most is — startup shutdowns. This not only curtails the innovation engine but ends up causing VC losses, which damages the faith and the confidence in the startup ecosystem. During the peak of the dotcom bubble, for instance, VC funding in the US startups had reached a record high of $66.4 Bn (2000) but by 2002 when the bubble was about to burst, the total annual capital inflow fell to below $20 Bn and remained the same for the next 11 years.

In order to mitigate the risk of startup failure, it is essential to decode the characteristics of the death valley of startups. Although numerous studies have been conducted on this topic, one specifically focused on Indian startups is limited. In our recent study, based on the analysis of 3.1K Indian startups funded between 2014 and June 2020, we found 385 startups that have shut down that impacting numerous jobs and loss of venture capital.

Note: Our analysis only concentrates on startups that have got funding during this period.

The 385 funded startups which have shut their operations have cost the overall Indian ecosystem a whopping $760 Mn in losses across 477 funding deals.

Out of the total investment lost, approximately 37% (or 284 Mn) was lost in startups in Bengaluru. This should not come as a surprise given the fact that the city is considered the venture capital haven for Indian startups in the country. 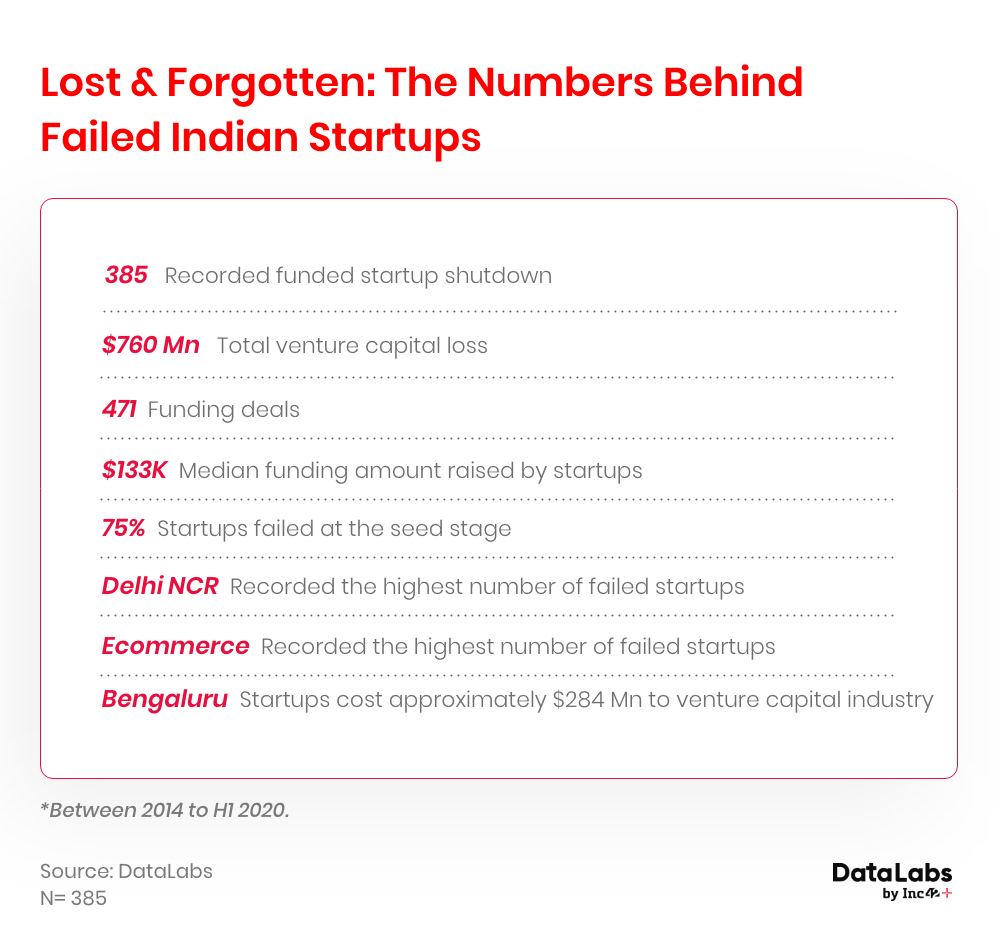 With each passing year, the hottest sectors for new launches have changed with the market. For example, ecommerce was the go-to option where there were too many players competing with giants such as Flipkart, Amazon, Snapdeal, Paytm Mall and others. The lengthy list of closures in this space indicates just how difficult it has been to survive in this sector in the past few years, especially if there are no big investors or tech giants backing the play.

The high capital expenditure to acquire sellers and users, high operational cost of inventory management and warehousing and heavy competition in the peak demand cities are some of the factors that have resulted in the collapse of 58 funded ecommerce ventures in the past six years. 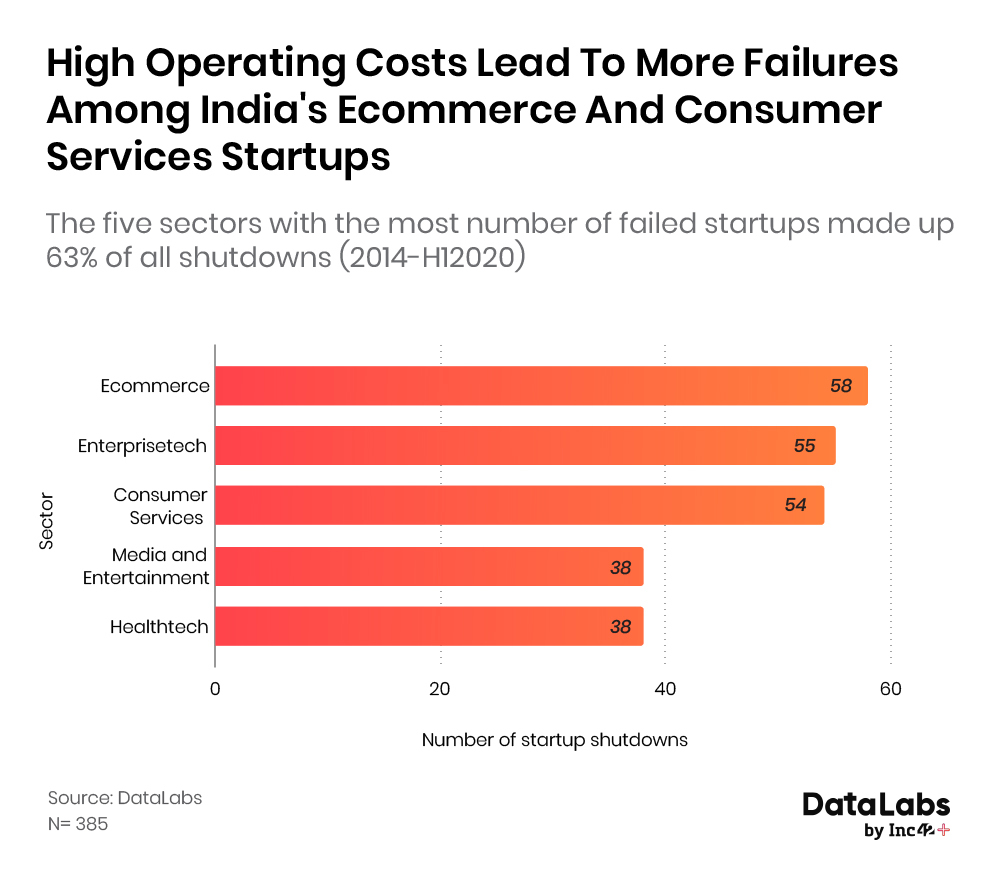 Besides ecommerce, the other sectors which recorded maximum shutdowns include enterprisetech, consumer services (including hyperlocal and food delivery platforms) media and entertainment and healthtech. The case of consumer services is quite similar to ecommerce — with 54 closures — things like high operational cost, high acquisition costs, heavy competition in big cities and the need to create demand through promotions and discounts have been the big factors.

In the case of enterprise tech and healthtech — which had 55 and 38 shutdowns respectively — the in-depth subject knowledge and market saturation from established players and tech and corporate giants has acted as a significant hurdle for new ventures. 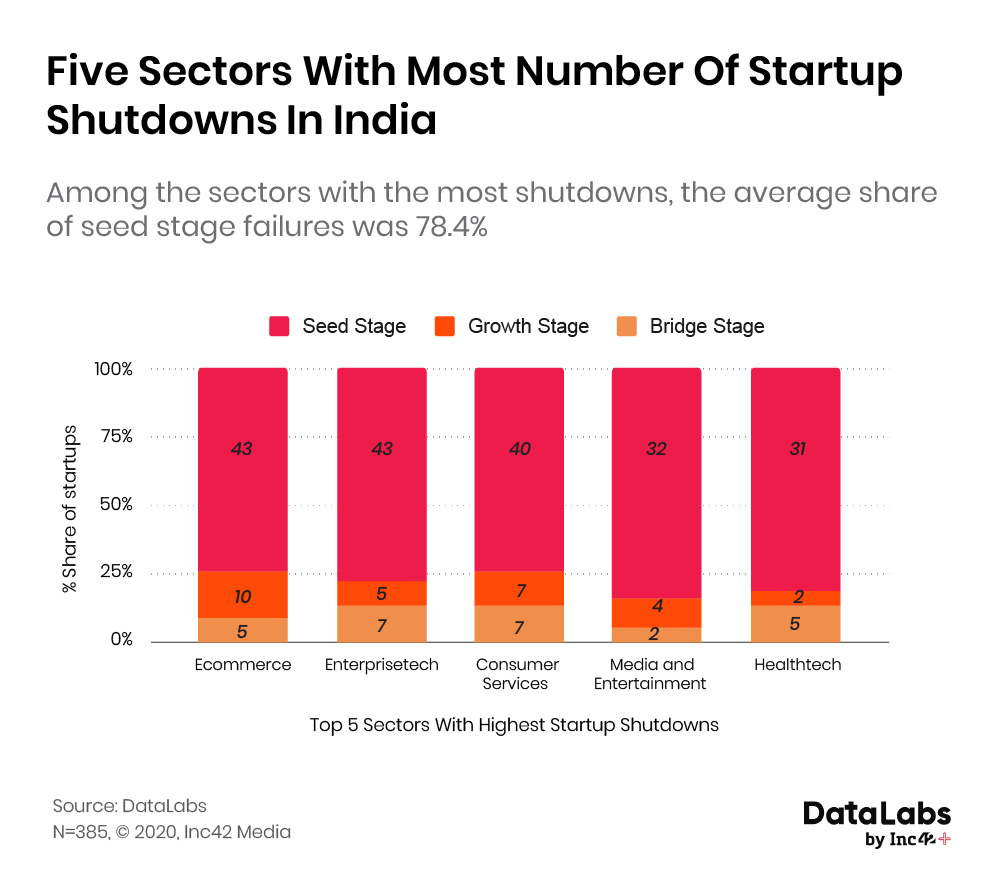 Seed Stage: The Biggest Valley Of Death For Startups 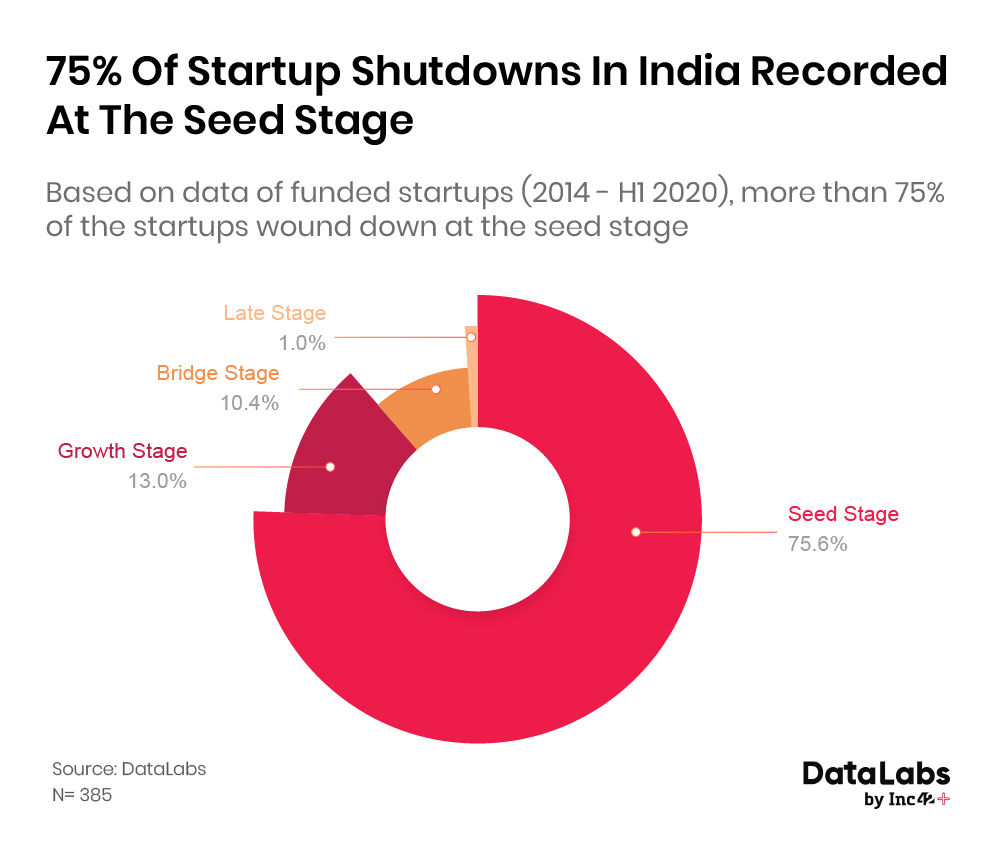 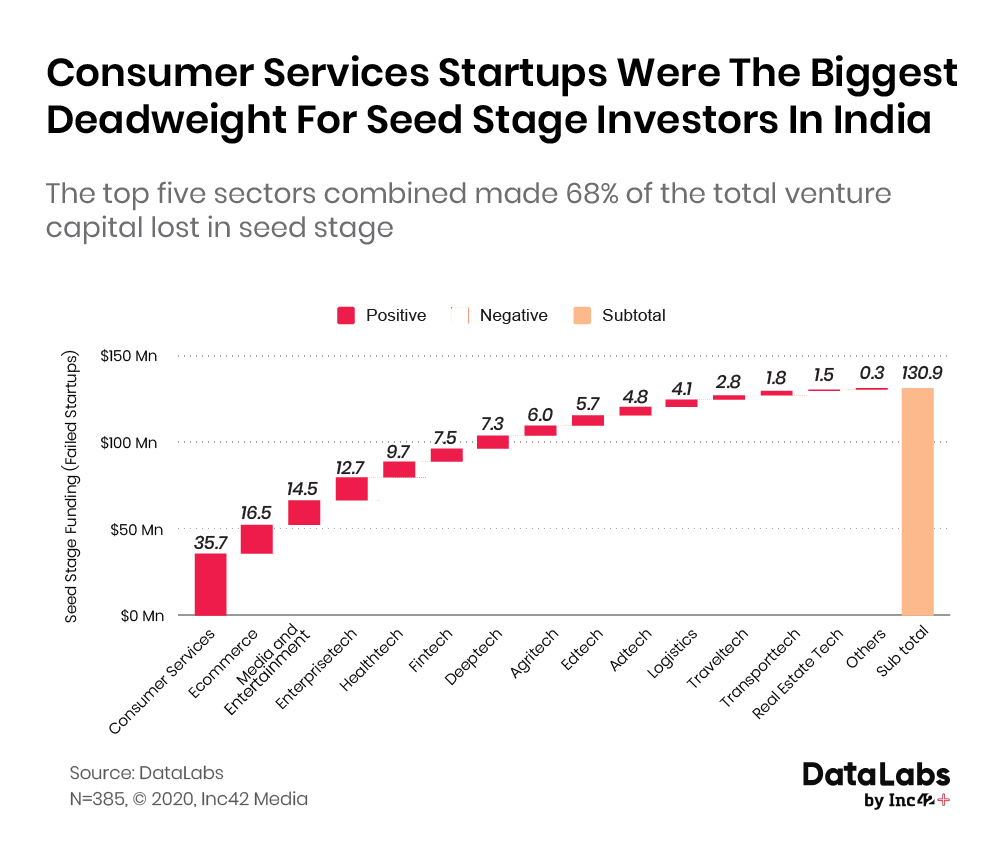 Bengaluru and Delhi NCR are two of the biggest startup hubs in the country — and this also extends for startup shutdowns. Out of the total $63.5 Bn raised between 2014 and H1 2020, a massive 80% was poured into startups located in these two metropolitan areas. 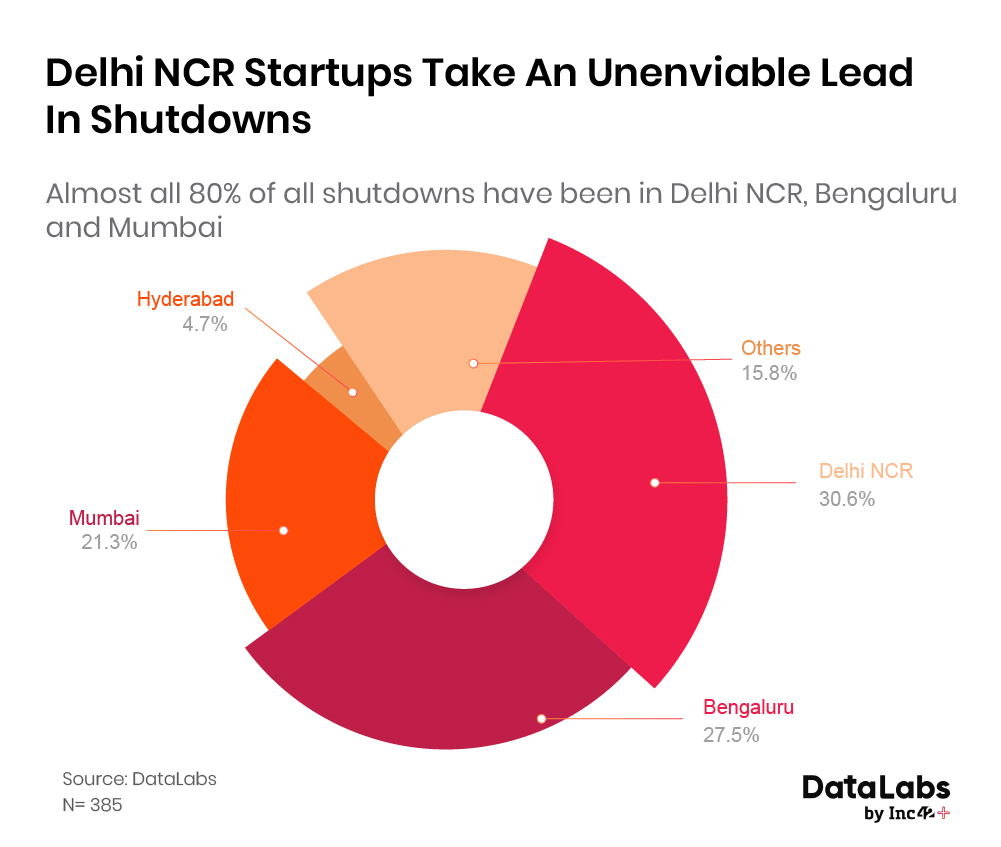 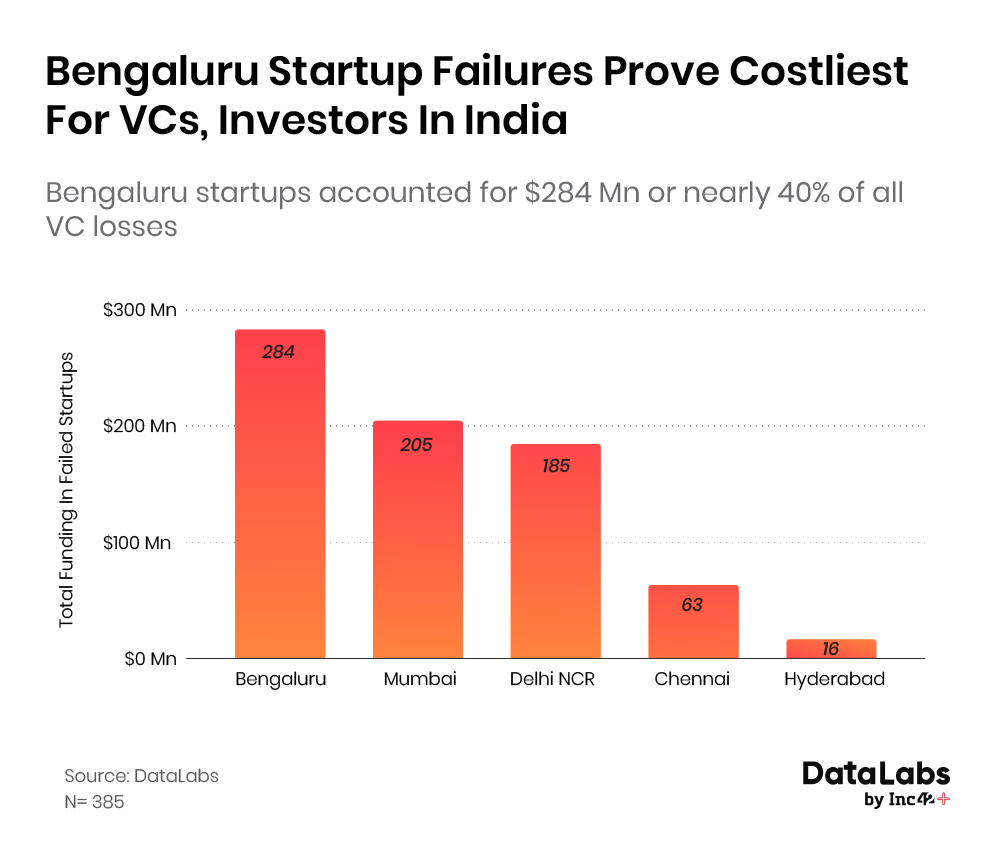 Will The Covid-19 Pandemic Result In More Shutdowns?

Beyond the seed stage, only 1% of startup closures came in the late stage, with just over 10% in the bridge-stage and 13% in the growth-stage. This indicates that access to investor money and steady cash generation, which are both easier in the late stage are crucial role to long-term survival. Indeed, lack of funding is the number one reason for startups shutting down, as seen in the Inc42 survey conducted on LinkedIn.

The dependency on venture capital is largely due to the fact that startups in India usually prioritise expansion of user base and growth in volume of sales or transactions over other key metrics such as positive EBITDA or profit margins. Secondly, user acquisition costs are much higher in the Indian consumer market, which make it extremely difficult for B2C startups to break even without steady funding. 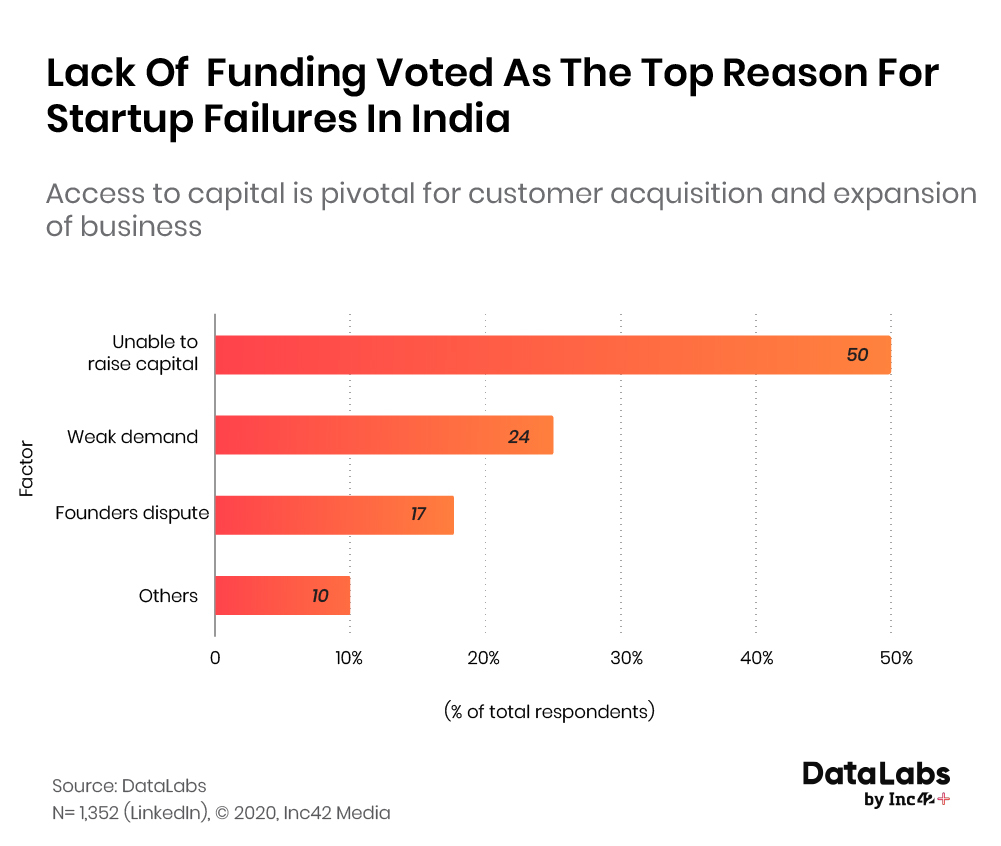 Considering the market hysteria as a result of the pandemic, the opportunity to raise venture capital seems to be narrowing down for a large chunk of startups. The total funding raised by Indian startups saw a massive dip between March and April 2020. The total capital inflow plunged by a whopping 55% from $1.05 Bn in March to just $474 Mn in April and $222 Mn in May. Also, the average monthly growth rate of startup funding between January 2020 and May 2020 was -39%.

In our latest LinkedIn poll, 50% of the respondents (n=1,352) chose “unable to raise capital” as the primary reason for startup failures in India followed by weak demand for product or service.

As seen in DataLabs‘ annual report for FY2019, investments in growth and bridge-stage startups grew the fastest at 30% and 12% respectively in 2019. And with $252 Mn in funding, the seed-stage deal value fell by 44% (compared to 2018) as only 306 seed funding deals were recorded. The report also showed that the median funding amount has been growing at 38% CAGR from 2015 to 2019 for startups in India. This indicates the growing popularity for late-stage investments over seed funding.

Given that the significantly higher amount of seed funding in 2015 and 2016 could not prevent the higher number of shutdowns for startups funded in those years, the future does not look promising for early-stage startups in this crisis where funds have dried up.

Today, having positive economies of scale, EBITDA and wider profit margins are turning out to be the most lucrative parameters for VCs — and startups don’t generally fare well on those parameters until the growth or bridge stage. Only a handful of startups that have a good financial track record or a significant market share stand any chance of raising mega rounds.

The startups at seed and growth stages which lack these metrics are very likely to shut shop or take the M&A route. This would have a cascading impact on the overall employment rate as well as GDP contributed by the tech startup ecosystem. The unemployment rate in India already stands at 23.4% with startups adding more fuel to the fire, the situation will worsen further leaving a long-lasting impact on the economic growth of the country.

If the pandemic was not enough, the growing tensions on the India-China border and the frequent skirmishes are also likely to hamper VC deal flow with the threat of more such clashes looming on the Indian economy. Amid cash conservation and frugality, business operations also have to be curtailed to a certain extent, and for many startups, even a big drop in production and operational scale can also mean the end of the road.