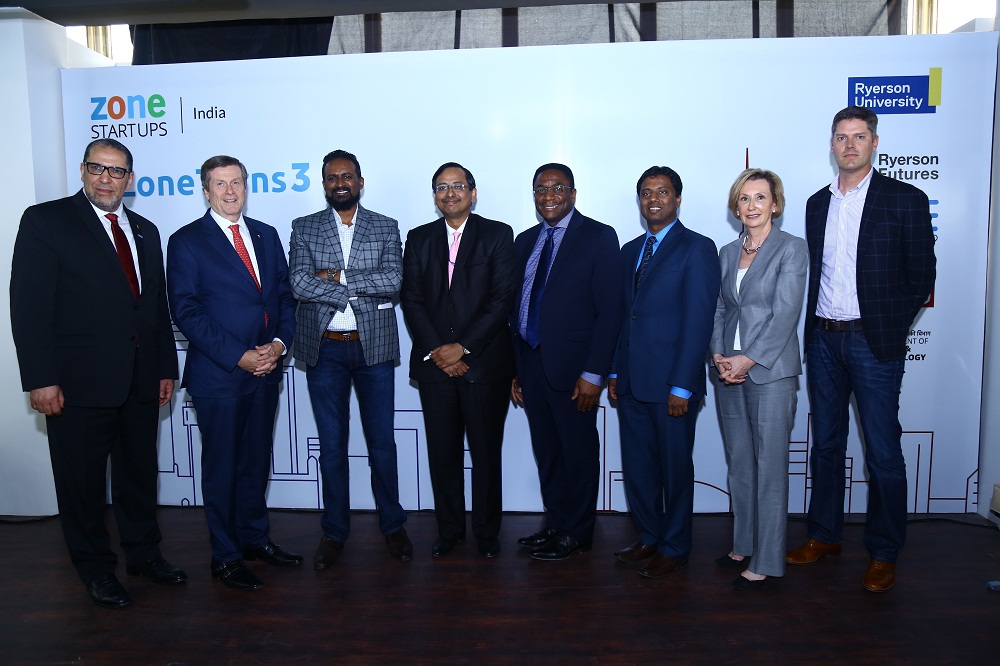 Zone Startups India celebrated their third anniversary by inaugurating a new accelerator space about 2500 square feet in size, as well as the Market Accelerator Program “Gateway91” to host and support international, growth-stage startups looking to build their India market. The inauguration was attended by Hon. John Tory, Mayor of Toronto and Mohamed Lachemi, President, Ryerson University, accompanied by a large Canadian business delegation.

The BSE-based accelerator had announced the programme last November. As a part of this endeavour, in January, the accelerator had hosted a few Canadian fintech startups and showcased them to industry partners at Fintegrate Zone, a 3-day fintech conclave.

Gateway91 is the fourth programme launched by Zone Startups (a joint venture between Ryerson Future, Toronto, and the BSE Institute) in 2016. The other three include empoWer, Rise Accelerator with Barclays and Thought Factory Accelerator with Axis Bank.

Alan Lysne, Managing Director, Ryerson Futures Inc said, “Today, we are pleased to announce the expansion of our accelerator space, with the support of BSE, Government of Ontario, and Government of Canada. That makes us the only startup accelerator programme in India, to have set up a programme to support international startups. We look forward to assisting many international growth-stage technology companies in their market validation and customer acquisition phase in India.”

Ajay Ramasubramaniam, Director, Zone Startups India stated, “The last year has been really busy for us, with several new initiatives launched such as corporate accelerators with Barclays and Axis Bank, as well as launching empoWer – India’s first tech accelerator for women entrepreneurs. Over the next few months, we will be launching a few more new programs, focussed on specific domains.”

Further speaking to the media, he talked about how only three years ago Zone Startups began in February 2014 – in half the space it currently occupies – with the aim to be an accelerator and not incubator. More than 120 startups have now been a part of the accelerator. Besides the accelerator, Zone Startups is also involved in corporate consulting and corporate innovation programmes.

The accelerator monetises by taking a small equity stake (from 1% to 4%) and, on an average, it has taken 0.5%-1.5% stake in about 20 companies in the programme. It is also in the process of launching a programme similar to ‘Next Big Idea’ in two other countries whose names he did not disclose.

The Next BIG Idea contest, which Ryerson University has been organising in India in partnership with the Government of Ontario, Canada, even a year before starting its accelerator program, has attracted close to 900 applications and has soft-landed 20 hi-tech Indian companies at Toronto and Ontario, Canada – whose names include CitrusPay, Vidooly, AdSparx, Plackal, Survelytics, and Remitr.

Meanwhile, the accelerator programme too has seen success with several startups having raised their funding, such as FlexiLoans raising $15 Mn last year, BabyChakra raising its Series A round last October, and Dimension NXG, Shirsa and vPhrase raising their angel rounds.