Launched In April 2017, The Paid Service Offers Subscribers One Free Dessert With Every Order Via Zomato 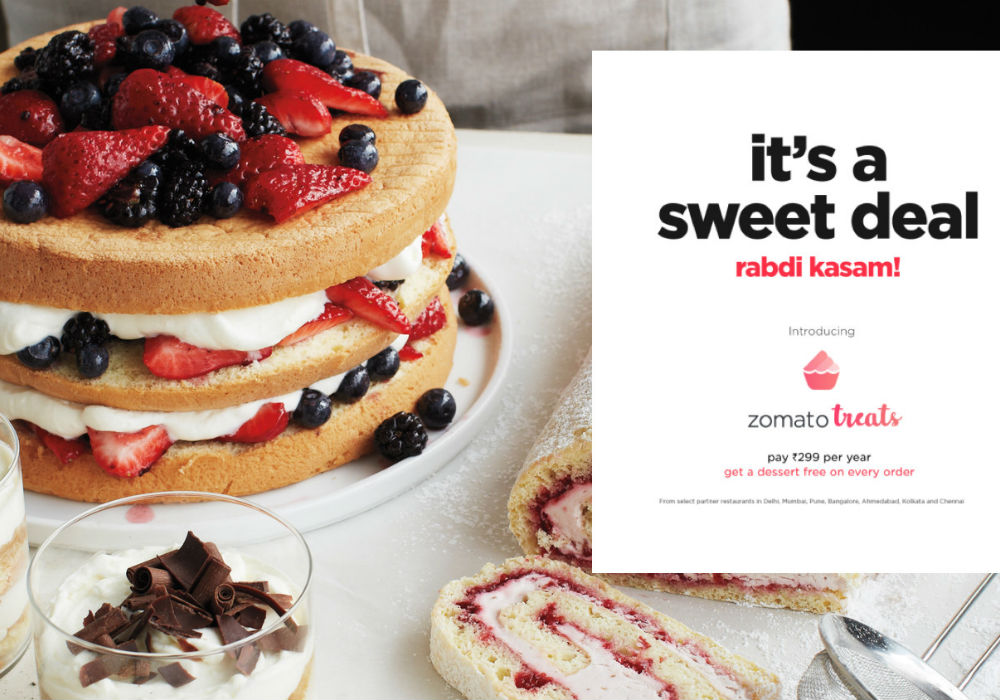 Following a rough year of setbacks, losses and markdowns, Gurugram-based foodtech giant Zomato is now on the fast track to success. After reaching 3 Mn monthly orders for the first time in July, the foodtech unicorn has reportedly on-boarded 21,500 subscribers for its paid Zomato Treats service.

According to reports, the premium service has delivered over 100K treats to its subscribers, since launching in April 2017.

As part of the premium service, paid subscribers are offered a free dessert with every order made through the Zomato platform. Zomato Treats is currently available to customers in India and the UAE.

Commenting on the feat, Zomato co-founder Pankaj Chaddah said, “The great thing is, it is already driving repeat usage. In fact, we have already seen a 25% jump in order frequency for members subscribing to Zomato Treats and see this trend holding over time.”

Following a pilot launch in Gurugram back in April at an annual introductory price of INR 249, Zomato Treats was officially rolled out in June 2017. To boost sales, the foodtech player is currently offering a discounted subscription plan of INR 149.

So far, the company has teamed up with nearly 700 restaurants in the UAE, in addition to several thousand in India. In Delhi alone, the startup has partnered with more than 1,200 eateries.

Chaddah added, “Our restaurant partners are seeing an increase in repeat orders from users who have placed an order, thereafter, signing up for Treats. As we scale up, we see Treats contribute significantly to overall online ordering business.”

The premium service is currently available to subscribers in 16 cities across the country, including Mumbai, Bengaluru, Chennai, Pune, Hyderabad, Kolkata, Ahmedabad and Chandigarh.

Zomato Unicorn: Layoffs, Losses And A Comeback In Foodtech

Founded by Deepinder Goyal and Pankaj Chaddah in 2008, Zomato has raised more than $223.8 Mn in funding and successfully completed 10 acquisitions. At present, InfoEdge holds a 47% share in the company. In 2015, the foodtech unicorn laid off 300 employees, in a move aimed at cutting costs.

A month after that, Zomato Base, a cloud-based point of sale product for restaurants, was launched. The Android application helps restaurateurs manage their day-to-day operations from a single platform. It also offers a variety of features including menu, recipe and inventory management, a built-in payment solution that accepts debit and credit card payments, CRM, and real time analytics.

Later in May 2016, the foodtech unicorn rolled back operations from nine countries out of 23 international markets. Around the same time, investor HSBC Securities and Capital Markets (India) decreased Zomato’s valuation by half, to around $500 Mn.

The company has since buckled down and adopted a strategy hinging on diversification and redesigning of its ad serving product. These measures largely proved successful, given that Zomato reported a 34% drop in losses during 2016-17.

During the same period, the company’s revenue surged by 80% to 60 Mn, while its annual operating burn fell by 81% to around $12 Mn.

More recently, in March, the foodtech startup announced the opening of its first Cloud Kitchen in a suburb of Delhi, Dwarka, as part of the pilot phase of its new project – Zomato Infrastructure Services. Cloud Kitchen is basically a virtual breakfast and brunch unit that functions primarily through websites and smartphone apps.

In May this year, the nine-year-old foodtech startup was reportedly the victim of a security breach, where the records of over 17 Mn users were stolen from its database. The information included user email addresses and hashed passwords. Just a day later, the company confirmed that it managed to contact the hacker.

In the same month, it was reported that the unicorn was competing with UberEATS to acquire Bengaluru-based hyperlocal delivery startup Runnr.

One of the things that have helped Zomato get back on track is the introduction of new products and services. With Zomato Treats, the foodtech company is looking to further expand its user base by offering a premium customer experience to subscribers at nominal prices.