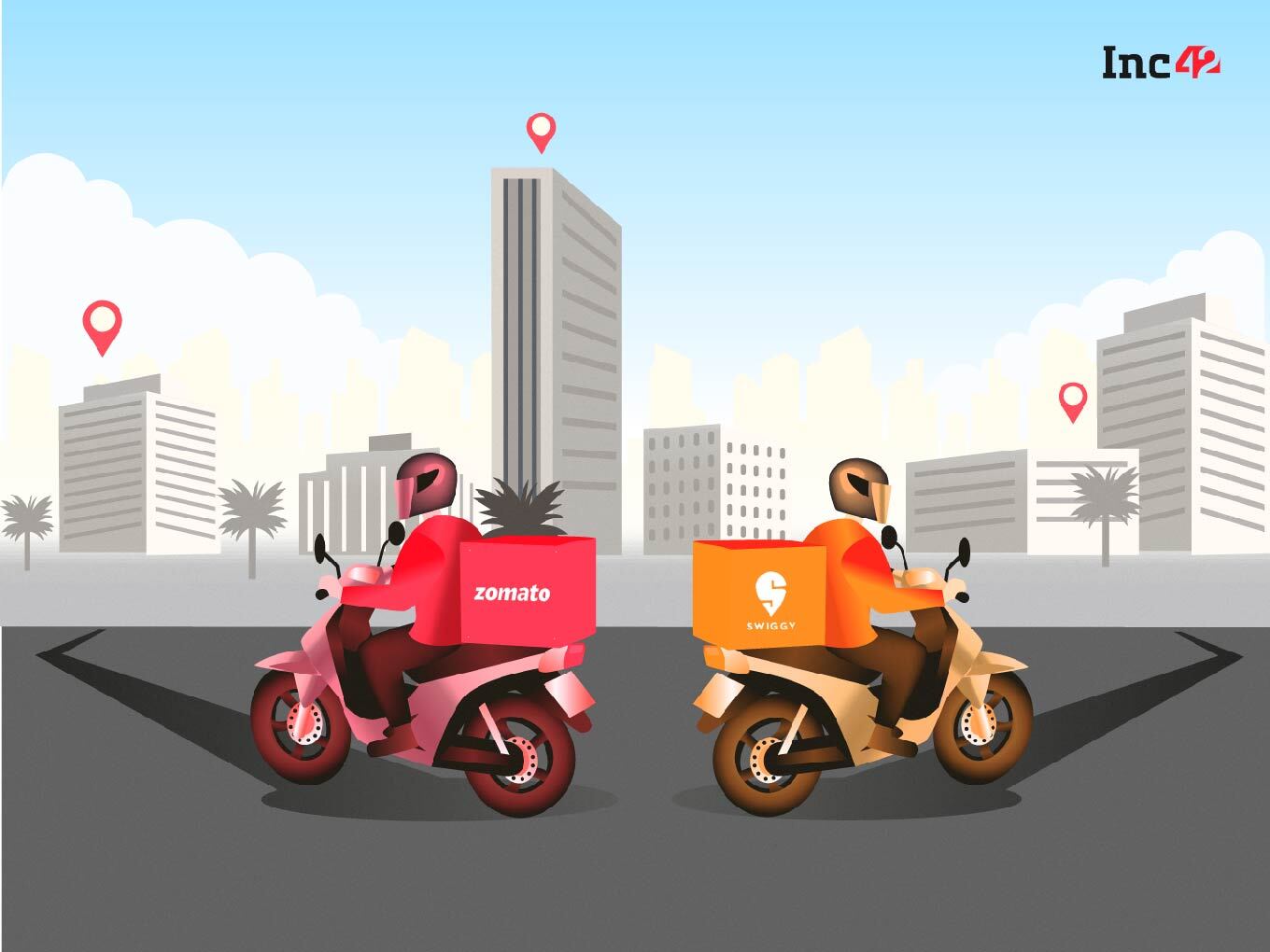 Deepinder Goyal tweeted that Zomato saw over 2.5 Mn orders for the day for the first time in its history

Goyal also said that Blinkit did two weeks worth of business in one day including 10,000+ COVISELF home Covid testing kits

While most of India had an eye on the clock on New Year’s Eve, food delivery giants Zomato and Swiggy were keenly watching an unprecedented spike in their order numbers.

Social media was abuzz with order numbers growing every hour and the battle of stats between Zomato and Swiggy. The platforms claimed to have processed over 4.5 Mn orders cumulatively for December 31, 2021, with several thousand orders per minute, according to the data shared on Twitter.

Swiggy cofounder Sriharsha Majety preferred to look back on how Swiggy brought in its first ever New Year’s Eve and how far it has come in 2021. And Zomato CEO Deepinder Goyal gave regular updates and numbers from food delivery as well as Zomato-backed Blinkit from the busiest day of the year. 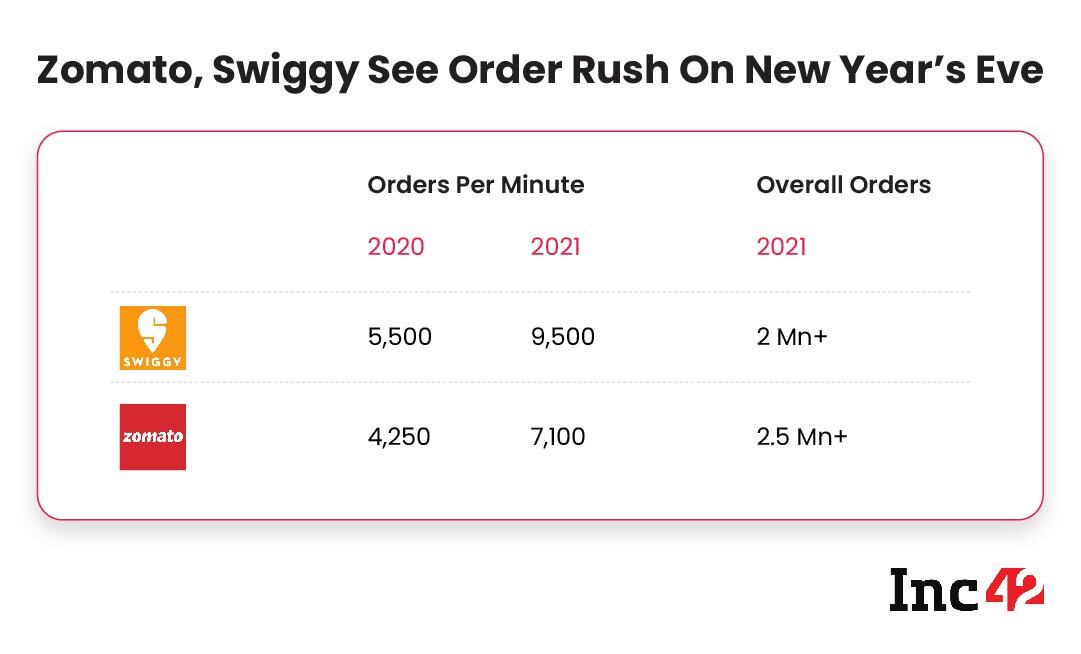 In comparison, last year, Zomato said it processed 4,254 orders per minute, with a GMV of INR 75 Cr for the day. 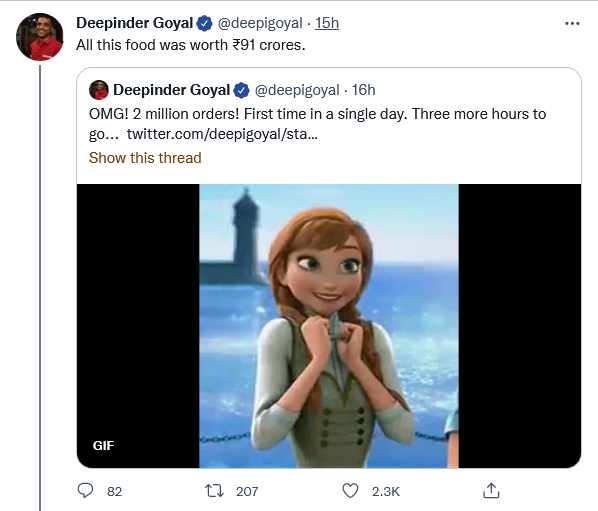 Goyal also tweeted data snapshots that showed that people in the UAE, US and Singapore ordered food for their relatives and friends in India. 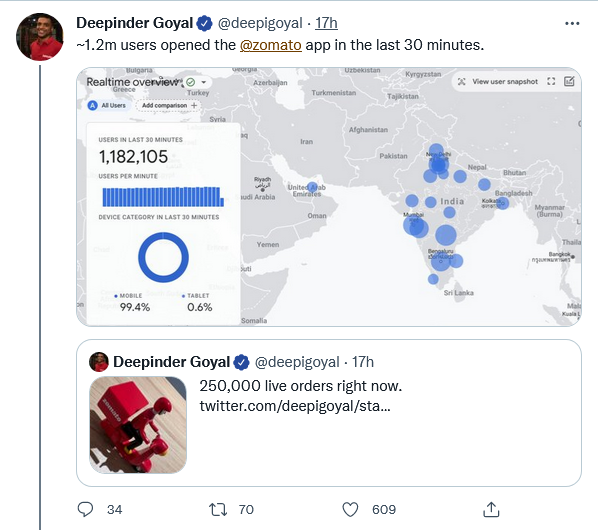 For Blinkit, Goyal tweeted that the quick commerce platform did two weeks worth of business in one day including 10,000+ COVISELF home rapid antigen Covid test kits, 130,154 litres of soda, 28,240 packs of instant popcorn, and 33,440 condoms.

On December 31, Swiggy Instamart recorded 63% more orders and 74% increase in GMV compared to the rest of the month, beating its own previous Christmas day peak. The order intensity peaked closer to dinner, with 17,662 being placed in 30 minutes alone.

The company added that the new users on its platform increased by 80%, with the number being 68% in Tier 2 and 3 cities like Mangaluru, Patna, Ludhiana and Surat. Among tier 2&3 cities, Visakhapatnam did the highest orders per minute at 190. Cities like Rourkela and Palakkad witnessed a 300% growth in orders.

Majety also jokingly RT’d an old 2014 tweet where he had once shared referral codes for new users, whereas now the company is rushing to fulfil millions of orders. The company claimed to have processed over 2 Mn orders through the day in 2021.

Further, the Bengaluru-based unicorn said 15,458 cartons of eggs, 35,177 bags of tomatoes, 27,574 bags of onions and 7,822 bread packets were ordered on its quick commerce app Instamart, while biryani was the most-ordered food item across India. Instamart saw 12,930 orders per 30 minutes at its peak.

Penetration of online food services market in India is set to grow 2x by 2025 with the right tailwinds in the post-pandemic market. The segment is likely to clock a GMV of $13 Bn, as per a 2021 report by RedSeer.

While Zomato went public in 2021 and Swiggy raised hundreds of millions, the Indian market still lags behind when it comes to penetration as compared to global counterparts. This means that some metros and cities offer massive addressable bases while others are yet to mature.

The report said India is expected to be the third largest consumer market by 2030, which will improve penetration in smaller cities and growth of the branded food services ecosystem

Brokerage firm Jefferies sees huge potential upside on Zomato’s stock with a one-year time frame on its recommendation. “In our upside case, we expect a 42% CAGR in delivery GOV over FY20-26E to reach US$12bn by FY26E. We assume strong up-tick in new user acquisition/ order volume growth and AOVs also hold at a healthy level. Other segments also grow strongly as the platform scales up,” Jefferies said in a note on Zomato in September.