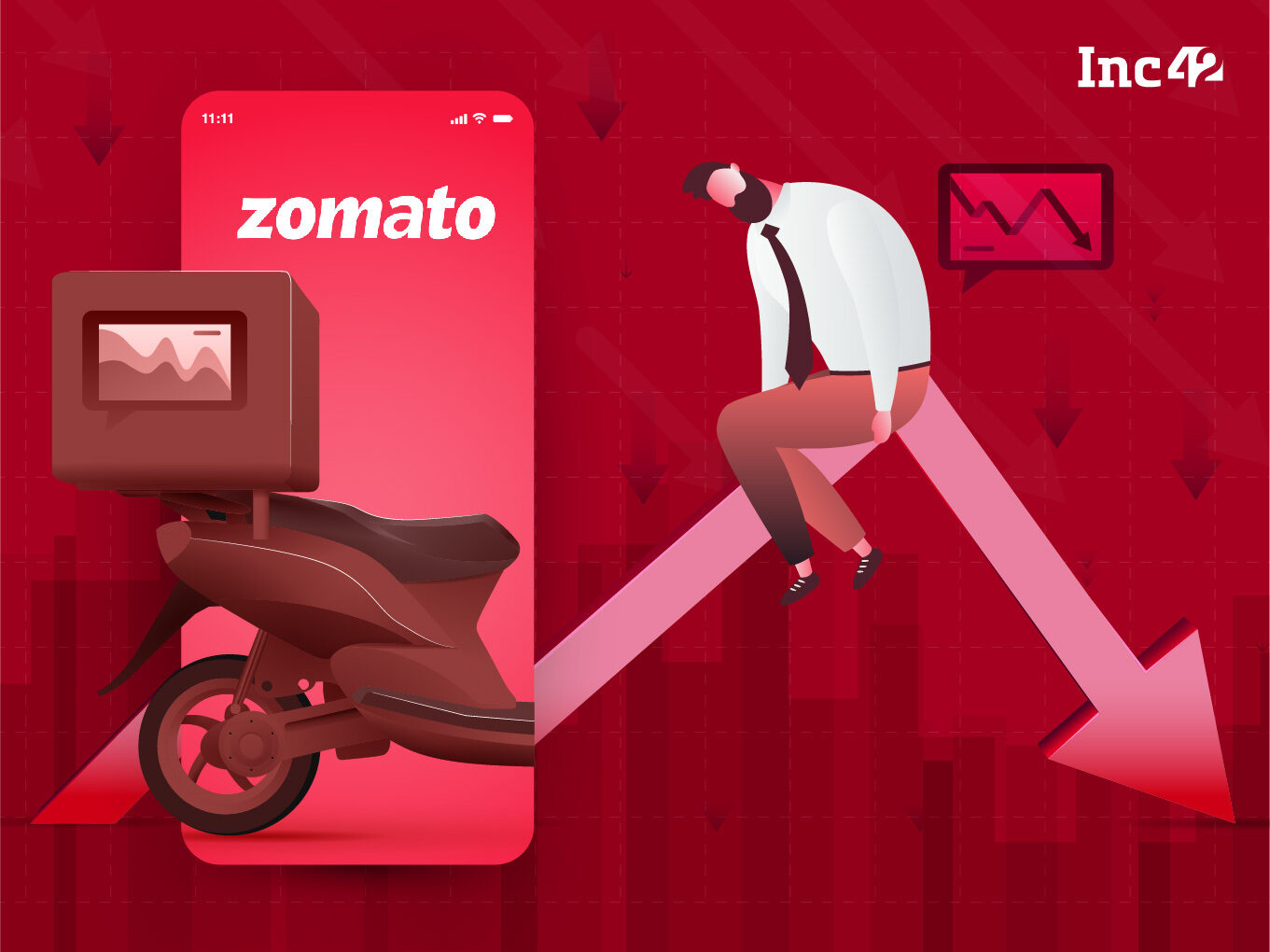 Days after Paytm hit its all-time low in the stock market, another listed new-age tech unicorn Zomato crashed close to 9% on Friday amid the possibility of rising interest rates, and global market sell off.

The stock was hammered as the broad market came under heavy selling pressure due to these impending tax risks. In the afternoon trade, it nosedived to INR 112.55 to record an intra-day low. It finally settled the day at INR 114.10 on BSE, 8.90% lower than the previous day’s close.

The stock has been on a steady fall this week. It had lost 14.56% in the last five trading days on selling pressure from foreign institutional investors (FIIs). As the stock has been on a downward spiral, it went below the listing price of INR 115 and market cap and slipped below INR 1 Lakh Cr to about INR 90,000 Cr.

Investor fury on Zomato follows the food delivery app’s closure of its South African operation. The closure is to strengthen its India focus by closing all the non-profitable/non-active divisions in its kitty. The Gurugram-based entity has closed all its international business operations, including the US, Singapore and the UK. It has retained the UAE operations.

“The recently listed tech stocks have been consistently reporting losses. Also, the 10% decline in Nasdaq along with an increase in interest rates has increased the misery. Investors seem to be taking their money from these new-age startups in panic due to profit booking encountered across various counters,” Rahul Sharma, cofounder of market research and advisory Equity 99, told Inc42.

Profit booking, also known as profit taking, is when individual shareholders or companies liquidate their holdings to cash out the profits that they have earned over the past few fiscals. Essentially, the money is going out of the public markets.

Commenting on the impact of the meltdown in tech stocks globally, Mohandas Pai, chairman, Aarin Capital Partners, said the fall in stock prices will lead to more reasonable valuation of startups in India and more caution on the part of investors that will price IPOs, especially anchor investors.

He also attributed the fall to macro factors such as rising interest rates that have led to nervousness and heavy profit-booking.

The former Infosys CFO added that there is no shortage of funds today for reasonably priced IPOs of startups.

“The success of an IPO is judged by the returns investors made a couple of quarters after the listing and not on IPO price alone,” he said.’

The crash in Zomato, which went public last year in July, as well Paytm is overall due to the non-stop selling pressure from FIIs and there is some news regarding GST structure to impact restaurant services which will change Zomato business model, pushing investors to book profits, according to Prashant Tapse, vice-president (research), Mehta Equities Ltd.

This is a good opportunity for long-term investors to add these stocks at a considerable discount as they might be reporting losses now but have huge growth potential considering their business models, Sharma added. One could see many investors who had shied away from the IPO due to the high valuations return in this phase to buy the dip for Deepinder Goyal-led Zomato and Vijay Shekhar Sharma-led Paytm.

“I believe this weakness in Zomato is due to global sell-off and might be due to higher valuations and stiff competition due to Swiggy. Another setback is due to new GST rules that came into effect from January 1 have made food delivery apps liable to pay 5% tax on restaurants, which might hurt this quarter’s earnings too,” said Gaurav Garg, head of research, CapitalVia Global Research.

In September, the food delivery giant came under a similar selling pressure when cofounder Gaurav Gupta had stepped down from the company.