Pankaj Will Keep Serving On Zomato’s Board of Directors And Will Move Away From His Active Role In The Company With Effect From March 31, 2018

In a major jolt to Zomato, company’s co-founder Pankaj Chaddah has decided to move away from the foodtech unicorn. In a blog post, Zomato CEO, Deepinder Goyal broke the news of Pankaj’s resignation.

Deepinder Goyal and Pankaj Chaddah together began Zomato’s journey in 2008.

“Today – the time has come for me to help him realise his own dreams and aspirations, just like he once enabled me to accomplish mine. As of 31st March, Pankaj will be moving on from an active role at Zomato to focus on the next chapter in his personal journey.”

In an email sent to Zomato employees, Chaddah said that he has been contemplating to resign for quite some time but he didn’t want to leave the company while it was facing tumultuous times. Here, he has been referring to the period between 2015-2016 when the company had to roll back its international operations from many countries and suffered a huge loss in revenues as well as valuation.

However, today Zomato is on the road to profitability and is picking up its pace aggressively in the Indian online food ordering and delivery domain, competing fiercely with strong and deep-pocketed rivals such as Swiggy and UberEATS.

Pankaj Chaddah: Summing Up His Decade Long Journey With Zomato And The Road Ahead

In his farewell email to Zomato employees, Chaddah shared some exciting and emotional moments with Deepinder and Zomato’s team. Building Zomato was something that he had never dreamt of.

In his words, “I spent a third of my life here and it has truly been amazing. It was everything I never imagined doing when I was growing up.”

He further added that Zomato has been the best team he could have ever hoped to work with. “Looking back at the journey and the team is frightfully overwhelming.” 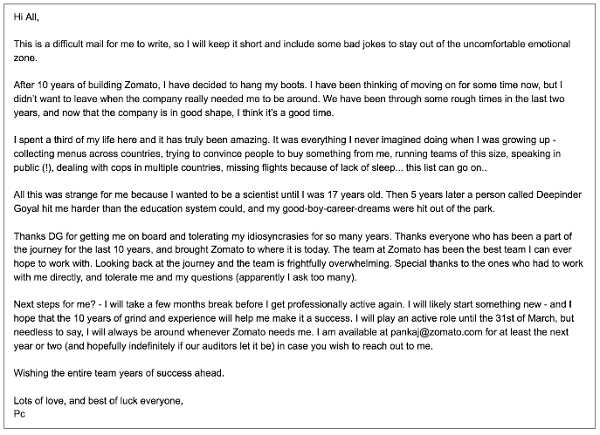 As shared in the email, post-resignation, Chaddah will take a few months break before picking up his professional roles and will likely to start something new. “I hope that the 10 years of grind and experience will help me make it a success,” he added.

Chaddah will continue to be an important part of Zomato in the future as well and he will keep serving on Zomato’s Board of Directors, Deepinder said in his blog post. He also suggested that going forward, Zomato will celebrate July 10th as Pankaj Day at Zomato and will have him host a town hall for all of Zomato – every year.

Also, last month the foodtech unicorn raked in $200 Mn from Alibaba Group. As per an ET report, Pankaj will retain his 3.11% stake in the company which is worth about $36.37 Mn (INR 237 Cr) post the latest funding by Ant Financial.

Deepinder believes that Zomato builds incredibly resilient people and when they go, they should do something new on their own. According to him, very few organisations build an individual’s character and resilience the way Zomato does.

A similar effort has been shown by the Indian ecommerce unicorn Flipkart, thereby creating a web of its own, Flipkart Mafia, in the Indian startup ecosystem. According to Inc42 DataLabs research, there are over 207 startups that have been founded by ex-employees of Flipkart. But it doesn’t stop there.

Inc42′s data also shows that there are over 49 Indian startups that have been backed by Flipkart, Flipkart founders, and by current and ex-employees. Almost three startups are added to the gang every month, taking the Flipkart Mafia’s strength to a massive 250+ startups.

With the flourishing startup ecosystem in India, this is a positive indication and certainly, India needs more such organisations fostering the culture of entrepreneurship and innovation.

At present, India’s food delivery and takeaway market, including the unorganised segment, is worth over $19 Bn. Entry of UberEATS and Foodpanda’s acquisition by Ola has further shaken up the market.

Amid the growing food delivery startups in the space, resignation by Pankaj Chaddah is bound to cause mayhem for the foodtech unicorn, Zomato. However, for Deepinder, it’s more a loss on the personal front. As he aptly said,

“For the last 10 years, Pankaj has not only been my co-founder, he has been the keeper of my conscience, my friend in good times, my support system during upheavals; he has been a brother and family to me. In the truest sense, we have both grown up at Zomato – started families, grew them up and scaled the business beyond what we set out to accomplish, had each other’s back through the downfalls, while sharing innumerable milestones and cherished memories.”