Under This Initiative, 150K e-Sakhis Will Be Selected In The Age Group of 18-35 “We are making Rajasthan strong, aggressive, and a progressive state. Women are our new strength and they are going to unleash new energy.”  — Vasundhara Raje, Hon’ble chief minister of Rajasthan.

Since 2008, when Rajasthan’s Hon’ble chief minister (CM) Vasundhara Raje launched the Bhamashah Yojana for the women of the state, the world outside has witnessed the rise of women in the state both socially and professionally.

This has been possible because of the state government’s efforts to empower women financially and equip them with essential technological know-how, which has, in turn, given them the self-confidence to lead their lives independently and lead the way for others as well.

As the Inc42 team observed during its Digital Rajasthan Yatra through six cities in March 2018, the government has made sweeping changes at the ground level to work towards its two-fold vision of making at least one female in every household e-literate as well as to increase overall digital literacy in the state. The aim of this campaign is to bridge the digital divide between the genders and bring women to the mainstream with a better lifestyle and entrepreneurial opportunities.

Taking a significant step ahead in this direction, the government has now added yet another programme to its host of women-related schemes: e-Sakhi. ‘Sakhi’ in Hindi means friend while ‘e’ refers to ‘electronic’, the buzzword in all domains these days.

e-Sakhi is a digital literacy programme initiated by the Department of Information Technology and Communication (DoITC), Government of Rajasthan, with the aim of making every individual in the state being digitally literate. Under eSakhi, the government will leverage the state’s “girl power”, wherein young women in the age group 20-35 will act as patrons in charting the course to a Digital Rajasthan.

“A total of 1,50,000 e-sakhis will be selected through an open competitive process who will work to make every Rajasthani digitally literate,” a DoITC official told Inc42. Every eighth person from every village and every fourth or fifth person in wards in urban-suburban areas will be appointed as eSakhis.  Any women falling the age between 20-35 and have passed Class XII can apply for being an e-Sakhi. 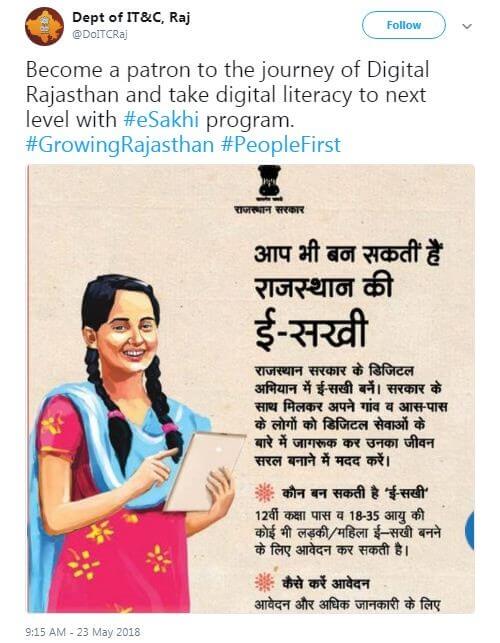 The digital literacy mission is live and the screening is in the process for the applications received till date. It will continue till December this year under which the DoITC is targeting to make 1.5 Cr people in the state digitally literate. The scheme will be implemented through the Rajasthan Knowledge Corporation Limited (RKCL).

Prior to this, the state government ran a digital literacy mission specifically for women, wherein they were offered training on carrying out online applications, online verification, and biometric attendance. The RKCL centers had also conducted free basic computer training for women. As part of the programme, approximately 31,398 women in Rajasthan were made digitally literate in 2016-17.

“The vision of Hon’ble Chief Minister towards Women Empowerment was realized with implementation of Bhamashah Yojana. With eSakhi – it is a paradigm shift in the field of Digital Literacy with empowerment of women – an example for others to follow,” said Akhil Arora, Principal Secretary, Information Technology & Communication, Rajasthan.

e-Sakhi: A Determination To Flag The Digital Literacy Torch In Rajasthan

Although the Centre has launched the ambitious BharatNet project aimed at bringing a digital and Internet revolution in rural India, including remote parts of Rajasthan, there is still lack of awareness around the usage of smartphones as well as about basic e-governance initiatives such as e-Grass, e-Panjiyan, soil health card, Sampark, e-mitra kiosks, etc.

This is the case not only the rural areas. Even in the urban areas with a higher literacy rate, people are shockingly unaware of the benefits of popular government schemes like the Bhamashah Yojana, Sampark and eMitra amongst others. The e-Sakhi initiative is thus also aimed at making people at ease with using digital services and bringing about more awareness in the state.

So, How Will e-Sakhi work?

An e-Sakhi is ideally a volunteer (like a scout/guide/NSS volunteer) who has interest in the regional welfare and social uplift. She is required to work out of self-motivation and there will be no honorarium payable to e-Sakhis.

Interested e-Sakhis will be given digital literacy training, after which they will further train at least 100 people from their respective villages/urban areas on how to access digital services. They will also create an email and WhatsApp groups to share the relevant information with the trainees under them.

Further, their task will be to increase engagement of people with the government’s digital services and to ensure that in coming days, every trained person can access digital services using his/her own mobile or e-mitra kiosk.

Women who want to be e-sakhis can register online through the e-sakhi app or website. For this, the volunteer must have an SSO (Single Sign On) updated with the Bhamashah ID. 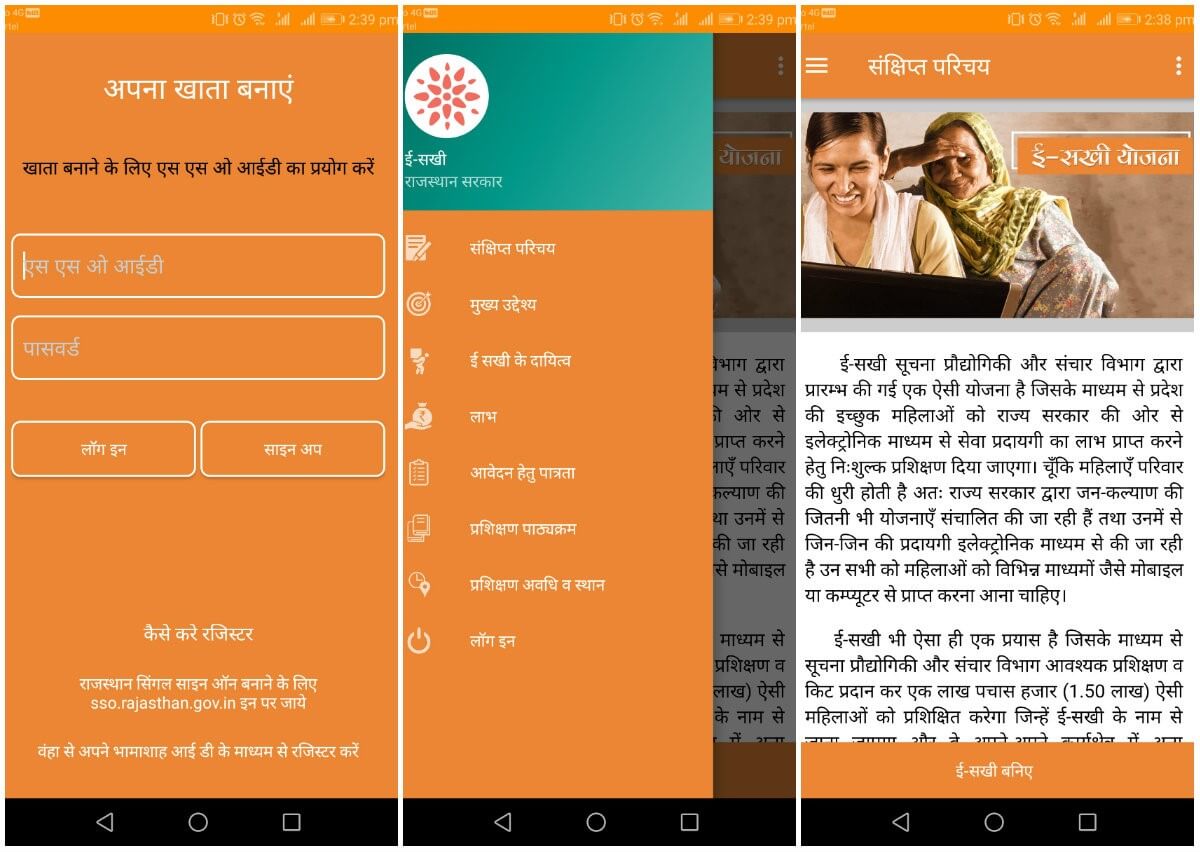 The e-Sakhi app has already recorded more than 1K downloads. Further, these women can also contact the block IT and statistical office for application as e-Sakhi.

Digitally Empowered Women: The Next Push Towards Progress

The Hon’ble CM of Rajasthan, herself a woman, seems to have been thinking on similar lines as reflected in her decision to engage young women to boost the state’s culture as well as drive technology adoption. This is not the first time that the honorable CM Raje has enlisted the help of women and sought to empower them.

Throughout her term, the CM has taken a multi-pronged approach to educate and enable the state’s female population in various aspects of life. The government has also launched Bhamashah Yojana, a scheme which enables transfer of all cash benefits directly to the bank accounts of women beneficiaries and also the transfer of non-cash benefits of various government schemes.

In January 2017, the Rajasthan government also partnered with global networking giant Cisco to facilitate video-enabled digital classrooms in women’s colleges across the state, with the aim to cover 10,000 women students by 2018.

While this helped make a solid foundation for the progress of women in the state, the state government also gave them wings to fly by providing them with entrepreneurship opportunities.

In November 2017, Rajasthan earned a place among the top five states in the country offering the maximum number of schemes for women entrepreneurs, according to a report on the State of Women Entrepreneurship in India unveiled by sheatwork.com.

Most recently, as part of the Bhamashah Techno Hub, a 150k sq ft incubation centre with a seating capacity of 700, the government set up a $77.3 Mn (INR 500 Cr) Bhamashah techno fund wherein $15.4 Mn (INR 100 Cr) has been earmarked for women-led startups.

While expressing much satisfaction on the progress made by the state government in terms of policy initiatives taken to boost the startup ecosystem in Rajasthan, Shipra Bhutani, founder of Jaipur-based Quantum Career Academy, told Inc42 earlier, “Initially, nobody was ready to buy the idea that women could run a successful startup. Not even my family. But my story is a living example of my belief that being a woman can never be a handicap to their success.”

A leader is one who a country or state to success and the public can identify with. Under the leadership of Hon’ble CM Raje and Akhil Arora, Principal Secretary, IT&C, Rajasthan, in the past three to four years, the state has been picking up the pace to empower its citizens at all levels.

During the 2018 Annual Startup Conclave by Yes Bank, speaking of women leading the entrepreneurship battle for their kind, Manu Shukla, a project officer in the IT department of the Government of Rajasthan, says that CM Vasundhara Raje was behind the success of many businesses in the state today.

“There’s a woman behind every startup in Rajasthan — and this the chief minister. In Rajasthan, the experience has been phenomenal because when we initiated the startup promotion, our own idea was that we are going to do anything that a startup requires. That’s disruptive; that’s what she did,” he said.

Rajasthan is one of the first states in the country that’s spearheading the establishment of a digital economy in the state with innovative initiatives such as iStart, Qrate Ranking, Digifest, e-governance, Challenge for Change and Rajasthan Stack, among others.

After leading the charge of growth in terms of startup-friendly policies/schemes and platforms like iStart, the government’s focus continues to be women empowerment in the state.

And, as the Hon’ble CM said, empowering women of the state digitally and making them the initiators of the digital mindset in the society will accelerate the government’s mission to further boost the state’s rank on the chart of women’s empowerment.