The recent allegations against IT giant Wipro of sex discrimination, unequal pay, harassment and unfair dismissal filed by former employee Shreya Ukil come within a fortnight of a study released by the ET Intelligence Group. The study stated that an examination of the annual reports of 46 Nifty companies showed a total of 415 cases of sexual harassment filed in the past financial year, with 80% of these in information technology (IT) and banking firms. Incidentally, Wipro headed the list with 100 cases, followed by ICICI Bank with 94.

A Telegraph report states that Shreya has alleged that she was subjected to a “deeply predatory, misogynistic culture” at Wipro, was forced into having an affair with an older boss Manoj Punja, was paid far less than male staff (earning up to £75,000-a-year rather than the typical £150,000 paid to male equivalents), and was treated like “dirty goods” after ending the affair and lodging complaints about her treatment. She also stated that a number of other women had left Wipro because of similar experiences.

In a statement issued to the media, Wipro said both Punja and Ukil were fired from their jobs as they had violated the company’s stated policy by having an “unreported personal relationship.” On the defamation case, the company declined to comment and stated that it is committed to the principle of equal employment opportunity and provides all our employees with a work environment that is free from discrimination and harassment of any kind.  Wipro said that it is defending these allegations before the court.

What’s disturbing is not the fact that another sexual harassment case has come to light in an IT company. The more disturbing thing is the allegation made against Wipro of having a misogynist culture where women are required to be subservient. It can hardly be called a coincidence that Wipro heads the list of most sexual harassment cases filed, last year.

One could agree with what Priti Kataria, vice-president and global human resources head, GIS, Wipro, had to say about the report,” An increasing trend of complaints shows the increasing awareness and the conviction in the organisation’s process to be able to address the concerns. We have seen around 100 cases last year and this, on a base of 152,000-plus employees, is a small percentage, but each case has its own context.”

But the bigger question which remains to be answered is that are these organisations faltering at the basic tenet of the Sexual Harassment of Women at the Workplace (Prevention, Prohibition and Redressal) Act, 2013, which clearly states that it is the duty of the employer to “provide a safe working environment at the workplace.” While the prevention of harassment at work entails setting up Internal Committee to lodge such complaints and setting compliances to check, but it starts with nurturing a conducive workplace environment.

As per the act, following constitute the unwelcome acts of behaviour:

Sairee Chahal of Sheroes, a jobs and career community for women, states “Making a workplace safe requires tacit work. One has to see what kind of environment is being promoted. Is it an acrimonious environment, or a shrill or a chest beating environment? The second part is the setting up of compliances, the committee, and the awareness for gender sensitization.”

If one goes by the allegations against Wipro, it is simply not a case against an individual. The malaise that is being pointed out to is the culture being promoted in the organisation. Added to that is the lack of women in senior leadership roles to participate in the Internal Complaints Committees (ICCs) as mandated by the law, which further becomes a barrier to keep harassment at check.

We spoke to couple of startup entrepreneurs about the measures being taken at startups to keep harassment at bay.

Upasana Taku, co-founder of Mobikwik, stated, “We believe in the old adage ‘prevention is better than cure’ and hence, have put some strong measures in place to prevent any incidents of sexual harassment at the workplace. As founders, Bipin (founder of MobiKwik) and I have nurtured a very open culture at MobiKwik. Any of our 250 team members can walk up to anyone within the company to talk about anything under the sun.” 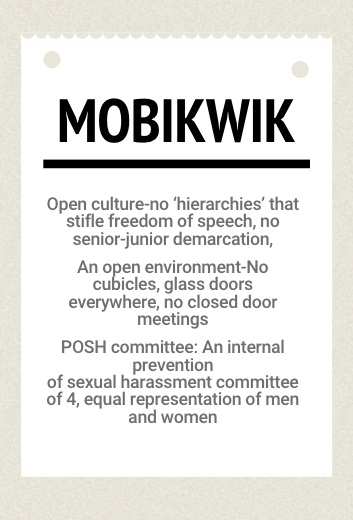 The POSH committee which takes care of such complaints, comprises of one Presiding officer,Upasana, two other members from the company who have prior experience in social work and have knowledge in legal matters, and one member from a non-governmental organization (NGO), committed to the cause of women and familiar with the issue of sexual harassment at workplace.

On receipt of the complaint, POSH would immediately reach out to the complainant and get a detailed view of the nature and sequence of events. The accused employee in question would be called upon to share his or her side of the story. If proven and found guilty of indulging in sexual harassment, the accused will be terminated with immediate effect and further legal proceedings will be initiated.

Pankhuri Shrivastava of Grabhouse stated that since inception it has practiced a healthy and safe work environment policy for all its employees. The company’s organisation and culture discourages such illicit behaviour and strongly condemn it. 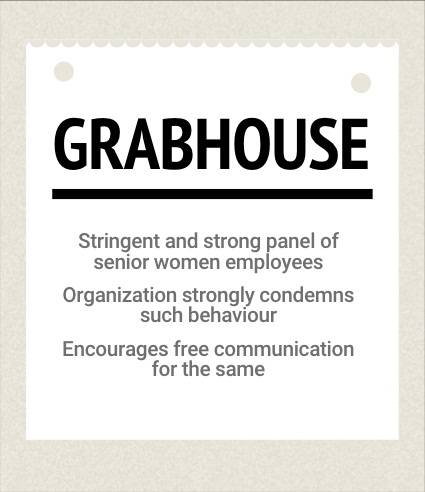 While Ishan Gupta, CEO of Edukart stated that at Edukart, providing a safe and equal environment at work place was a priority as more than 50% of the workforce at Edukart is female. He added that it was imperative to make female employees safe as only then they can perform better at the workplace. Besides, having the internal committee in place, the organization is involved in a continuous education process on this issue. 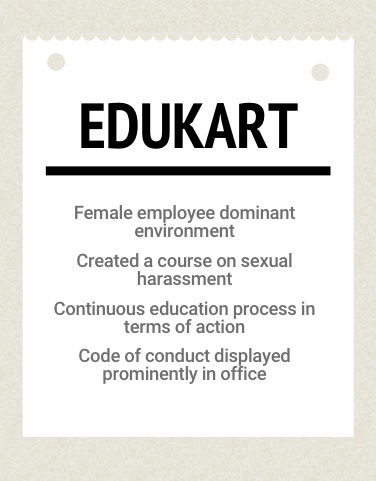 Ankita Tandon, COO of CouponDunia stated that as theirs is a young organization, they have a very open culture where lot of emphasis is placed on gender equality. She feels that younger people are now much more sensitised to the issue. 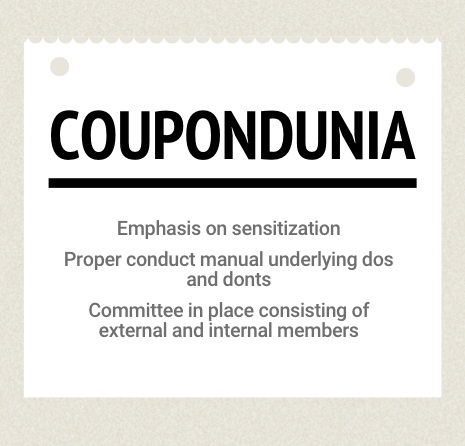 Amit Sinha, Vice-President, People and Business at Paytm, said that Paytm being an organisation where women are well represented, comprising almost 50% of the workforce, gender sensitisation to the issue takes place right from the day the employee joins and is a continuous process. Besides that, the company adheres to the standard regulations of the act. 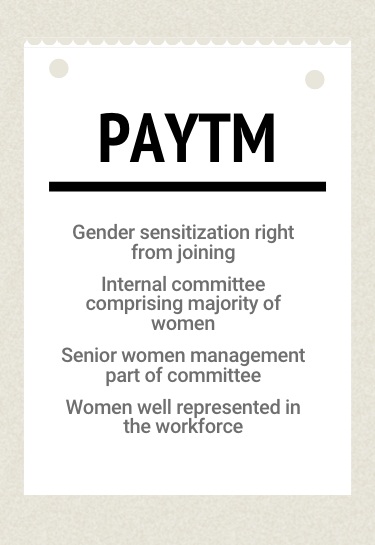 Namita Pasbola, HR Business Partner, at executive search firm SutraHR, states that, “Sexual harassment is a very sensitive issue, therefore, it should always be confidential (at least, until a solution is figured). I am a part of a company where majority of our employees are women (67%). We make sure, irrespective of the employees rank, he/she is aware of all the policies and committee rules. Because, most companies have these policies, but the employees are totally unaware of them.” 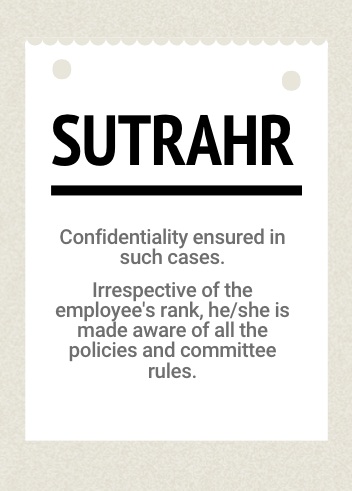 While it is encouraging to see that many startups and companies have proper procedures in place, but the real test of their efficacy would be when it is revealed how swiftly they act upon to resolves such cases. A greater number of cases being reported in IT companies mean that female employees are being encouraged to come forward and report such behaviour. However, there are still many who choose not to report given the stigma and fear of isolation attached with it. It is here, where companies need to step in to instil confidence in the female workforce.

Sairee points out that while many startups are doing their bit on the issue, yet there are still many who don’t have the requisite systems in place to keep a check. On this she believes in taking the issue lightly. While the first breach of the act results in compensation to the victim in the form of fine, the second breach of the act can lead to serious repercussions for the company as its licence can be cancelled.

Section 26 of the act clearly states this fact 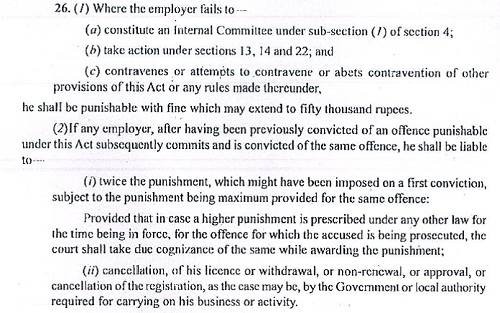 As Benjamin Franklin has said,

“An ounce of prevention is worth a pound of cure.”

It is imperative that to root out the evil from its cause, gender sensitisation needs to be a continuous process at startup and companies alike. Making the employee read a code of conduct once or having a committee in place is simply not enough. A continuous education process coupled with swift action in such cases will be the real effective measures which will ensure that women feel safer at workplaces and can contribute effectively to the ecosystems that they are a part of.