Among the super app contenders in India, WhatsApp has arguably the best shot at success. It has a massive user base, is the default first app for most new smartphone users and now it has a bevy of integrations to leverage in the super app journey.

We’ll take a look at how developments this past week indicate WhatsApp’s approach in this game, but first here are two stories that caught our attention:

In December 2020, Meta-owned WhatsApp sounded out its focus on offering a broad range of financial products for India such as microcredit, health insurance and pension plans. This was said to be part of the company’s plans to turn into a super app for a slew of services, primarily built around WhatsApp Payments.

Now, one year later, this plan is beginning to firm up. While the company’s payments service has been up and running since the beginning of 2021, it’s only now that the various pieces in the super app puzzle are beginning to fit in. It all began with Reliance Jio and the JioMart integration.

Facebook — before it rebranded to Meta — invested $5.7 Bn in Reliance Jio to take a 10% piece of the company and as part of this mega deal, WhatsApp would be the vector for JioMart’s ecommerce ambitions. JioMart is now integrated within WhatsApp for over 530 Mn users of the messaging app in India.

This past week, WhatsApp announced its second big integration in the form of Uber. WhatsApp users can now book Uber rides through the messaging app (they don’t need the Uber app for the same). The feature is currently being tested out in Lucknow and is expected to be rolled out across the country soon.

This is the kind of super app approach that has been expected from WhatsApp. The idea is to integrate established services within the app, rather than Facebook investing billions to build these services themselves.

Unlike the Tata Group, Reliance and Adani Group, WhatsApp’s strategy banks on its massive user base in India, rather than acquisitions, which the conglomerates have opted for. But for WhatsApp’s integration play to work, it will need to maximise its digital payments base.

Last week, the company was allowed to increase its payments user base to 40 Mn users, a 2X bump from its existing limit of 20 Mn users. While the company only has around 2 Mn users for its payments service at the moment, it looks like the company will add more services as this base expands.

For WhatsApp, the payments vertical is critical in its super app plans. It spent millions in litigations and court cases in the run up to the launch of the payments service and now that it is beginning to see the green shoots in the form of user growth, the messaging giant will capitalise on this momentum.

The biggest hurdle for WhatsApp will be its patchy history when it comes to user privacy and data security. For instance, the company’s much-maligned privacy policy or the Pegasus spyware which have made some users nervous about the sanctity of communications on the app.

For now though, WhatsApp seems quietly confident about its chances in the super app pool, even if other players are threatening to make a splash themselves. Will WhatsApp’s massive 530 Mn-strong user base prove the trump card?

Here’s the weekly performance of some listed Indian tech companies 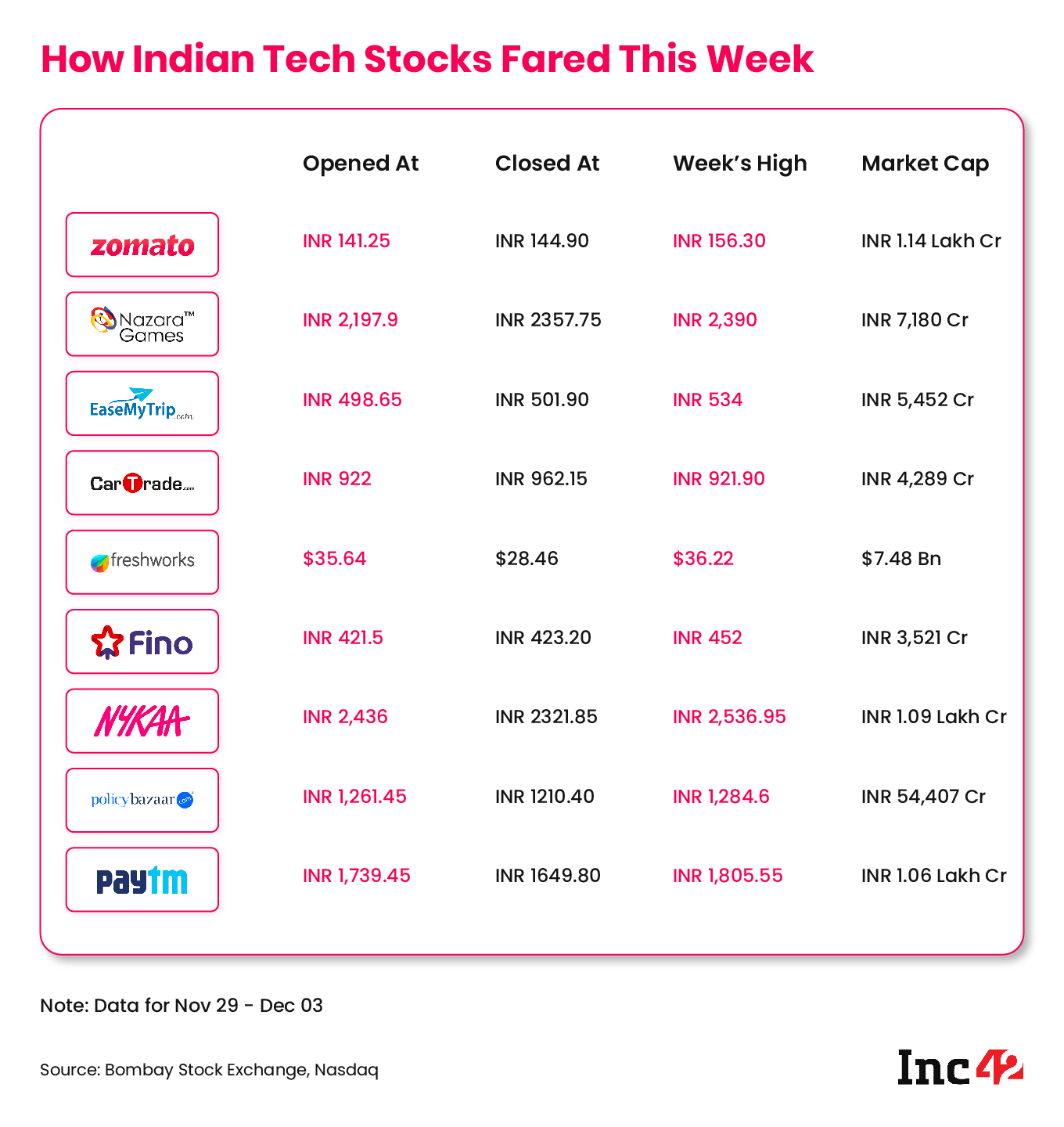 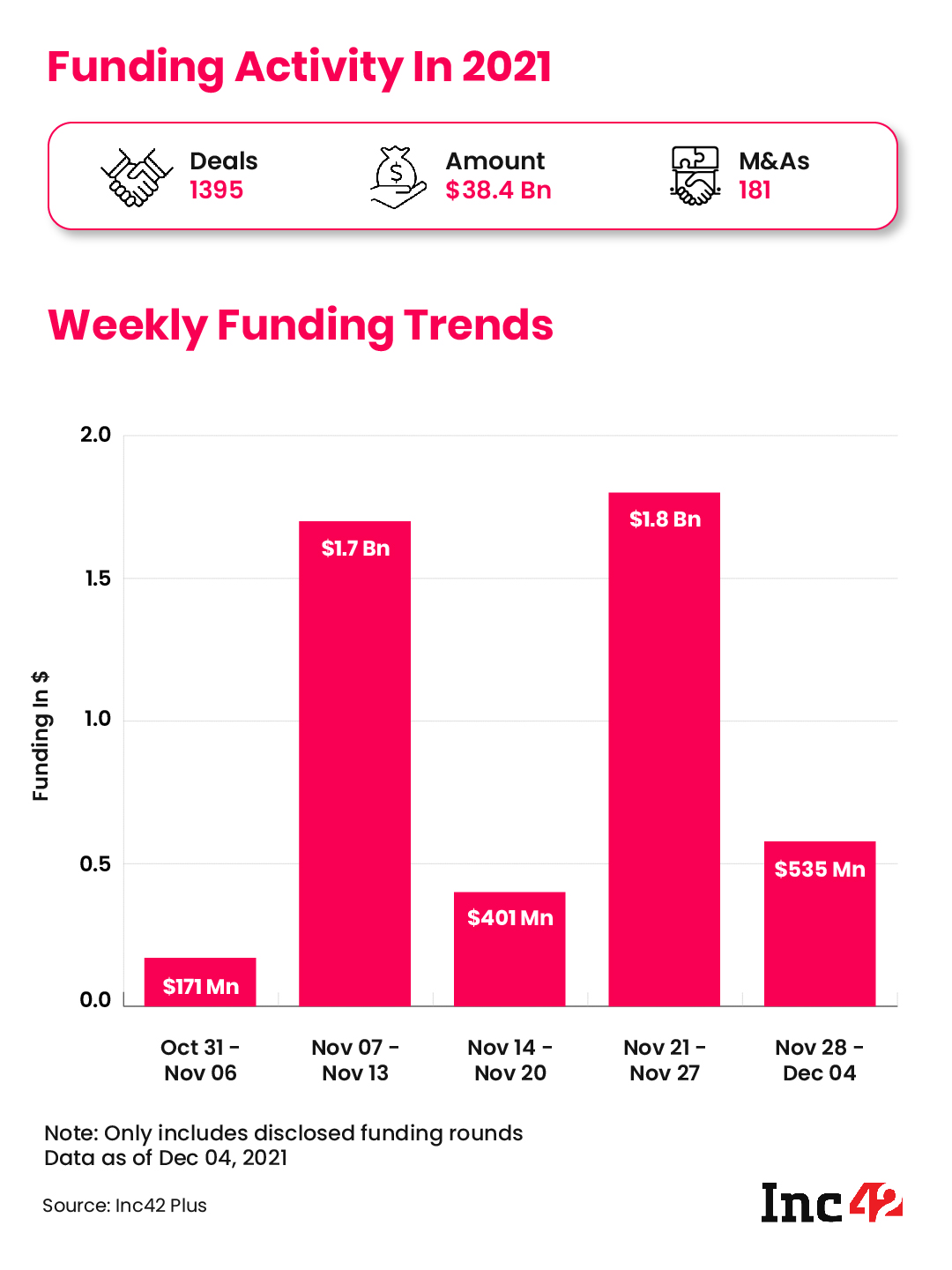 In Spotlight | Celebrating The D2C Summit

Over 25 sessions, 75+ speakers, more than 5000 attendees and hours worth of insights, tips and hacks from India’s D2C leaders — we hope you caught this and more in the second edition of The D2C Summit

Headlining the event were keynotes and fireside chats with the likes of Thrasio cofounder and CEO Carlos Cashman, who delved into the journey of the real “Thrasio” and also had some words of wisdom for India’s roll-ups and houses of brands that are looking to replicate Thrasio’s success.

Besides this, Wellversed’s celebrity investor Yuvraj Singh helped us decode how celebrity engagement works in the D2C space, while Paper Boat’s Neeraj Kakkar looked back at the journey of building an empire of INR 600 Cr. Among the other highlights were panel discussions featuring the likes of Lenskart cofounder Ramneek Khurana, Vahdam Teas founder Bala Sarda and others on how D2C brands can expand globally.

Check out the Inc42 Plus D2C Academy to recap all these sessions and watch out for our dedicated coverage on the best talks and panel discussions through the next week.

That’s all for this week, folks. Watch out for another roundup of the week’s top stories next Sunday.