Lendingkart generated a revenue of INR 464 Cr with INR 422 Cr in expense, leading to a profit of INR 29.6 Cr

Lendingkart has disbursed more than 1 Lakh loans worth INR 5,500 Cr since its inception in 2014 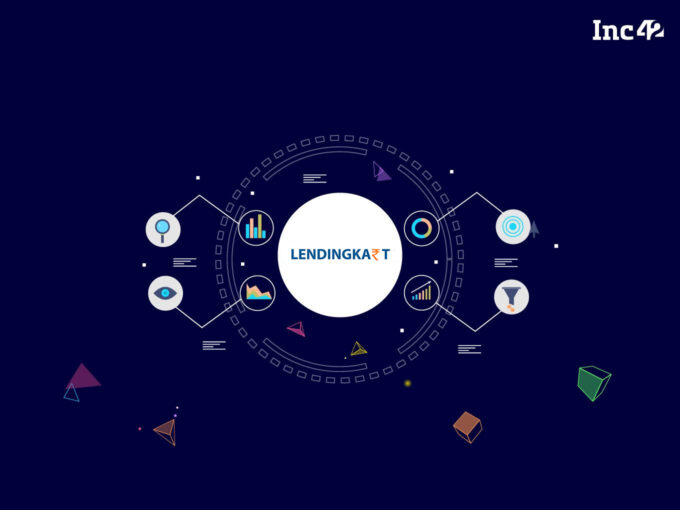 Ahmedabad-based fintech startup Lendingkart has recorded another profitable year with nearly 118% increase in its margins before tax from INR 19 Cr in the previous year to INR 41.9 Cr in the financial year 2020, ending in March.

According to the company’s financial statement accessed by Inc42, Lendingkart has doubled its revenue to INR 464 Cr, registering a 113% growth compared to the previous financial year. In FY19, the company has noted INR 218 Cr revenue. With this, the company’s expense also doubled up from INR 198 Cr to INR 422 Cr, leading to a profit of INR 29.6 Cr after tax.

Founded in 2014 by ex-banker Harshvardhan Lunia and former ISRO scientist Mukul Sachan, Lendingkart turned profitable in FY2019. In FY2018, the company had recorded a loss of INR 52.26 Cr with a revenue of INR 91.8 Cr. 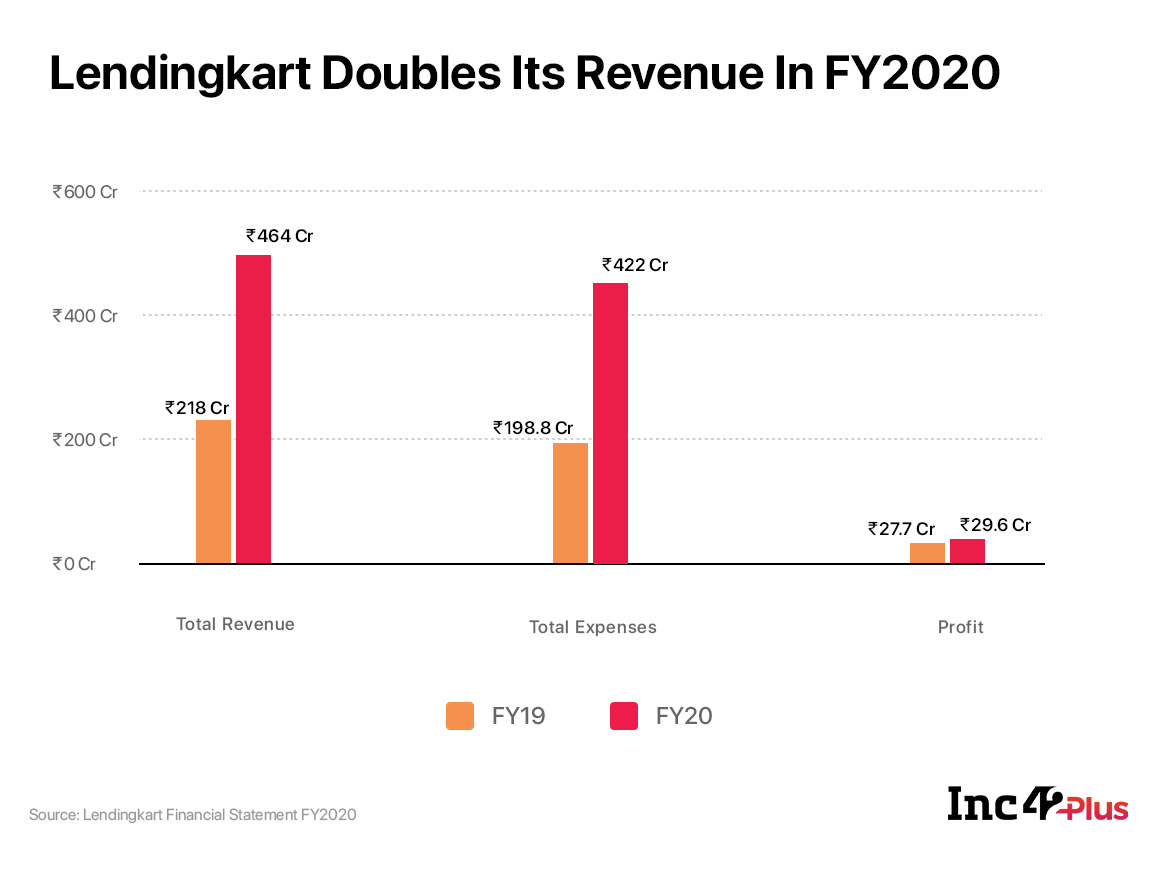 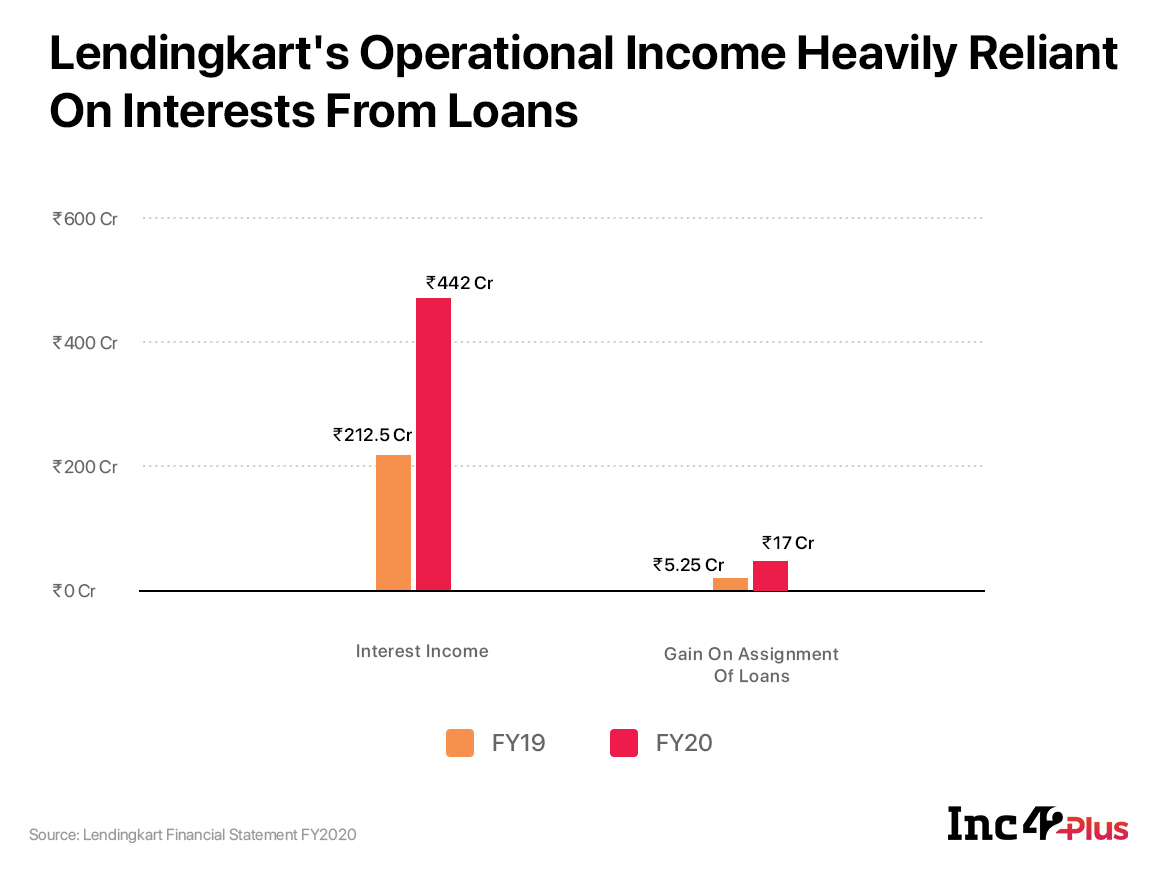 In 2020, Lendingkart focused on strengthening its core business offerings and also expanding to other financial services like insurance. Besides this, the company also introduced the concept of colending, under which it partnered with banks and financial institutions to help them create a lending portfolio of small businesses.

Talking to Inc42, Lendingkart CEO and cofounder Lunia said, “The idea of our business was to bring in the digital infrastructure to bring money to small businesses, and then we will allow other NBFCs to connect with small borrow and allow them to use our platform.”

In monetary terms, Lendingkart spends nearly 42% or INR 177 Cr of its total expense on finance cost, which is the interest and other costs incurred by the company while borrowing funds. While, another 28.29% or INR 119.4 Cr was spent on impairment of financial instruments. Employee benefits was another major area of expenses for Lendingkart, with nearly 11.6% or INR 49 Cr going into it. Besides this, the company recorded INR 62.67 Cr other expenses, nearly doubling from INR 30.39 Cr spent here in FY2019. 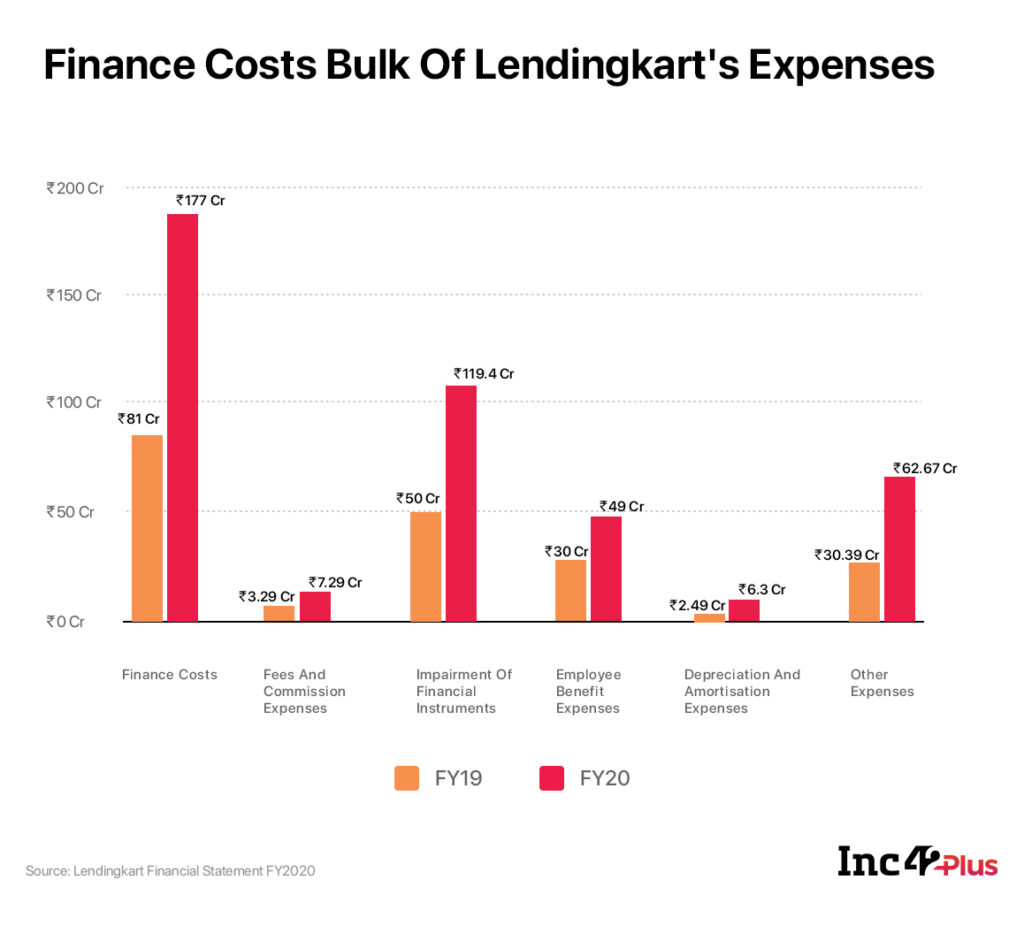 The digital NBFC and lender provides instant working capital finance to SMEs and has disbursed more than 1 Lakh loans worth INR 5,500 Cr to more than 90K businesses in 1,300 locations in India. In FY 2020, it disbursed nearly 53,000 loans, an 85% increase compared to the previous year, while its assets under management (AUM) grew by 80% to INR 2,400 Cr.

The company competes with other SME lending platforms such as LoanTap, Kinara Capital, Capital Float and Aye Finance Aye Capital had recorded a 2x growth in its revenue to INR 415 Cr in FY2020 with a profit of INR 40 Cr.

Over the years, Lendingkart has raised nearly $242.5 Mn from marquee investors like Bertelsmann Indian Investment, Anicut Capital, Fullerton Financial Holdings, Alteria Capital, Sistema Asia Capital. The company had last raised INR 319 Cr (around $40 Mn) during the pandemic, of which INR 86 Cr was raised in May. The funding was a part of Lendingkart’s Series D round.

Lunia highlighted that the funding from the existing investors helped the company sail smoothly through the pandemic. Although the company did witness a downturn, it hopes to recover it by the fourth quarter of FY2021, between January and March.

Besides this, Lunia also added that international investors such as Temasek-owned Fullerton Financial Holdings, which has a joint venture with the Bank of China called Bank of China Fullerton (BOCF), had given the company a clear picture of the business impact from the pandemic. Therefore, the company was heard up to tackle the situation.

Lunia explained that Lendingkart bifurcated its portfolio in terms of demand-estimates — high demand, medium to low demand and low demand. The company also stopped all new disbursal and focused solely on portfolio management. Alongside this, the company had also brought in different strategies for different regions as the spread of Covid-19 was not consistent nationwide.

The company also had a strategy in place to keep its employees onboard, however, there was a minor downturn there as well. Earlier in May, the company had laid off nearly 30% of its workforce. Lunia confirmed this development, adding that the company usually lays off 15%-20% of its workforce annually after taking into account the performance of each employee at the time of appraisal in April and May.

“We had done rationalisation depending on the planning for 12-18 months, but it got portrayed as everyone was laid off due to the pandemic,” Lunia said. The company has resumed its hiring process once again, and hired nearly 50 people this month. The company also created an extra pool of ESOPs along with the bonuses and new income plans.