What Next For Paytm After Much-Hyped IPO Turns Sour?

What Next For Paytm After Much-Hyped IPO Turns Sour? Social media this past week has been abuzz with analysis, hot takes and insights on the Paytm IPO. And as the fintech giant listed publicly, much of that turned into memes as the Paytm stock tanked after listing.

So what exactly went wrong and will Paytm bounce back? We will go into this shortly, but here are two stories that need your attention first:

As feared, Paytm’s high pre-IPO valuation has come back to haunt the company after a major 20% discount on its first day of trading. After the hype around India’s biggest initial public offering, Paytm couldn’t last one full trading session on its market debut as its stock hit the lower circuit and was pulled off the trading floor.

Naturally, more concerns and questions are being raised on the Vijay Shekhar Sharma-led fintech giant’s super high valuation, its lack of profitability and the business model itself, which many claim does not have a competitive edge. Considering the lack of profits for Zomato which had a relatively smoother listing, there is some mystery around why Paytm has suffered this dip.

Analysts are now cautioning investors against buying the dip for Paytm. The message is to hold off till the stock gains some momentum. After hitting the lower circuit of INR 1,560, trades on Paytm were halted by the stock exchanges to prevent extreme price movements and protect existing investors. Paytm’s market cap went below its pre-IPO valuation of $16 Bn and stood at INR 1.01 Lakh Cr ($13.64 Bn).

Of course, the issue of overvaluation of Paytm has been a major point of contention for analysts in the run-up to the IPO. According to pre-IPO reports, Paytm was initially targeting a valuation of $35 Bn, but then brought down its target valuation to $20 Bn for the IPO.

Analysts had cautioned about investing in the stock, fearing a discount on listing. Macquarie Research said, “Paytm’s valuation, at 26x FY23E Price to Sales (P/S), is expensive, especially when profitability remains elusive for a long time.” Worryingly, it also said Paytm is only likely to generate positive free cash flow by FY30, saying that its business model lacks focus.

For instance, other payments apps and fintech companies have also added the array of services that Paytm does — either directly or through partnerships — which does dent the company’s prospects in the long term.

According to Paytm founder Sharma, fintech business models are not well understood widely. He was insistent this week that cross-selling across Paytm’s various businesses is a key strength. “These are easy to understand models… If I sell a wallet or a phone or I can pick up food from a restaurant… then you know the business model compared to [payments]…” he was quoted as saying.

The focus now would be to turn things around, rake in profits and cut down on businesses which do not move the needle in terms of revenue. All eyes would be on the first quarterly financials from Paytm post the listing. 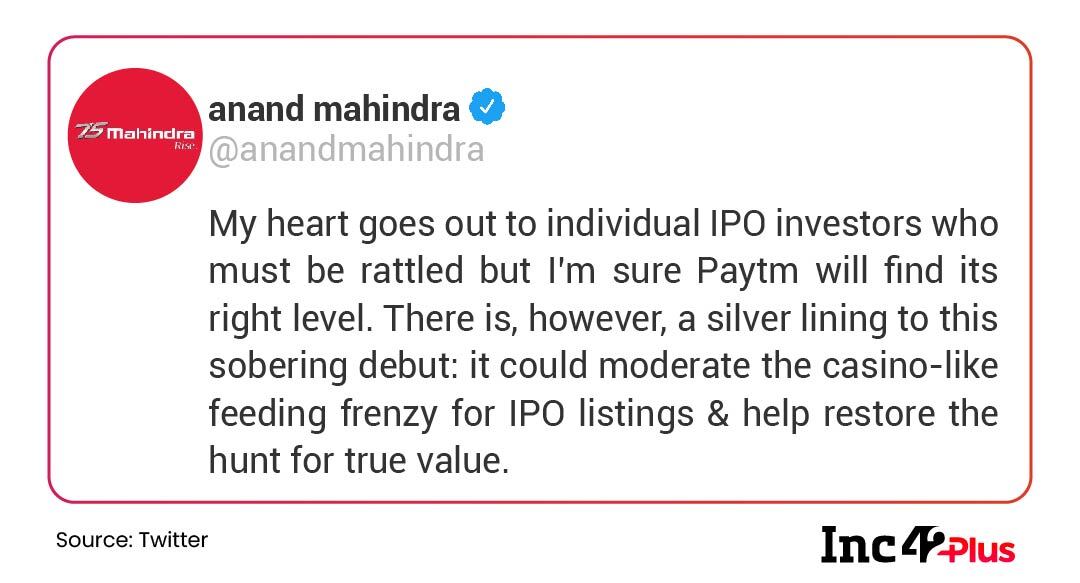 Of course, all eyes will be on the IPOs that follow Paytm. The likes of PharmEasy, OYO, MobiKwik, Delhivery, ixigo and others are lining up for the public markets and Paytm’s dull performance might just give pause to the stock market investors. With Paytm’s tepid debut, the market sentiment around fintech startups has already soured, leading to Mobikwik’s grey market stock prices falling by 11%. Thrasio-style Mensa Brands became the 36th unicorn this year and the fastest ever to get to a $1 Bn+ valuation. But which startups did it beat to get there? Here’s a look at the top 10 fastest unicorns from India so far. That’s all for this week. We’ll be back next Sunday with the best of the week.