The ads depicted that due to the short time between two orders, the delivery partner, who delivered the order in the pouring rain, refused selfies with the Bollywood celebrities - voicing that all customers are stars for Zomato delivery partners 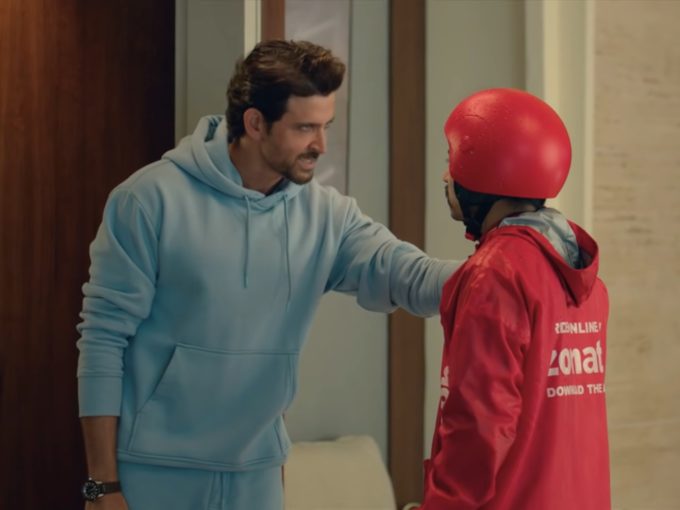 Gurugram-based foodtech Zomato recently released a statement in response to the criticism that the company had been receiving for its ad starring Bollywood stars Hrithik Roshan and Katrina Kaif. The online food delivery service was being accused online by netizens for “exploiting” their workforce and glorifying the poor working conditions of gig workers.

According to the statement, Zomato stated that the ads were shot with different goals — to show delivery partners as heroes, to raise the dignity associated with the job, to demonstrate the pride and intention of delivery partners in serving each customer equally, to highlight the need to talk with the delivery partners respectfully. “We believe that our ads are well-intentioned, but were unfortunately misinterpreted by some people,” the statement said.

The other side of the story… pic.twitter.com/hNRj6TpK1X

In the ad, a delivery partner from Zomato delivers food to Hrithik Roshan’s house who calls him jadoo – an alien character associated with one of Roshan’s movies – for delivering the order on time even in the pouring rain. He then asks the star-struck delivery partner to take a selfie with him and rushes in to get his phone. Meanwhile, the delivery partner gets a notification to pick and drop another order so he rushes out without waiting to take the selfie. A voiceover states that whether Hrithik or not, every customer is a “star” for the delivery partner who will deliver orders even in rain.

While the ad attempts to thank the delivery personnel who even work during unfavourable weather conditions, netizens voiced that this was an “inhuman” way to treat workers. Others opined that it was immoral to not pay fair wages to delivery executives while paying hefty amounts to celebrities. Calling the ads tone-deaf, users have mentioned that the delivery partner could not even wait for a minute to take a selfie with his favourite celebrity as he has to “meet targets”. Further, many pointed out that the ad calls delivery partners “aliens” for working in conditions unacceptable to humans.

In the statement, Zomato claimed that the ads were conceptualised six months ago and shot two months ago, even before the talk around gig working conditions. “Having said that, we have been intently listening to all the chatter about gig workers and all the problems associated with this part of the economy. As a company, we have always acknowledged whenever we’ve come short, and we understand that you expect more and better from us.” Zomato added. It also added that it will soon publish a blog explaining why the foodtech thinks that its delivery partners are fairly compensated.

Amid the criticism, Zomato also received support on social media. Many have called out the lack of tipping culture in the country, while others have touched upon the fact that netizens constantly make issues about everything.

Recently, online grocery delivery service Grofers also faced criticism over its 10-minute-delivery feature that would exploit its workforce. The company clarified that the 10-minute grocery delivery was only possible due to partner stores located within two kilometres of their customers and efficiency of the store staff. A Zomato senior official also supported Grofers’ founder Albinder Dhindsa amid the criticism. Zomato holds a 9.16% stake in Grofers.