Walmart To Rope In Its Own Employees For Last Mile Delivery; Begins Testing Associate Delivery

Walmart To Rope In Its Own Employees For Last Mile Delivery; Begins Testing Associate Delivery

In the latest experiment, one of the world’s biggest retailers Walmart is testing a programme that sends store employees to deliver online orders at the end of their shift at the customer’s’ doorstep.

As the competition increases, so does novelty. Or so it seems in the case of ecommerce.

The programme, called Associate Delivery, was announced by the retailer, on its blog last week. It is the latest measure as it tries to leverage its large physical footprint to match rival Amazon’s  convenient options for web purchases. The test pilot of the new delivery experiment has begun at three locations in Arkansas and New Jersey in the US.

The plan is similar to what Uber has done – use existing workers driving their own cars in order to create a vast network with little upfront cost. A feat similar to how Uber created a ride-hailing service without actually owning any cars.

Walmart Associate Delivery: The How

The idea behind it is simple – “to cut shipping costs and get packages to their final destinations faster and more efficiently, to create a special win-win-win for customers, associates and the business,” as per the blog.

Workers can opt in to earn extra money by making deliveries using their own cars. They’re assigned packages by a software-based on where they live so the route aligns with their commute home. Once they are done working at the store for the day, they pick up the packages from the backroom, load them into their vehicle, enter the delivery addresses into the GPS on their phone and head towards home.

The employees choose how many packages they can deliver, the size and weight limits of those packages and which days they’re able to make deliveries after work. It’s completely up to them and they can update those preferences at any time. The software also allocates packages based on minimising the collective distance they need to travel off of their commute to make a delivery.

The programme is completely opt-in, not something the employees are required to do. The company has, however, not yet specified how the employees will be compensated. Walmart is tapping into its 4,700 US stores and more than a million retail employees as it seeks to redefine itself in the age of ecommerce dominated by Amazon, which offers delivery of some products in as little as an hour in some cities. According to EMarketer Inc., online spending in the US is expected to increase 16% this year – almost more than four times the pace of overall retail – to reach $462 Bn.

Marc Lore, President and CEO, Walmart US ecommerce stated, “We already have trucks moving orders from fulfilment centers to stores for pickup. Those same trucks could be used to bring ship-to-home orders to a store close to their final destination, where a participating associate can sign up to deliver them to the customer’s house. The best part is this gives our own associates a way to earn extra income on their existing drive home.”

The test comes on the back of the fact that about 90% of the US population lives within 10 miles of a Walmart. Hence, the company is using those locations as shipping hubs to compete with Amazon on the last mile of delivery, considered the most expensive part of getting goods to customers.

“Now imagine all the routes our associates drive to and from work and the houses they pass along the way. It’s easy to see why this test could be a game-changer,” Marc said. He further added, “I’m sure you can imagine how we can leverage these types of last-mile innovations in the future to deliver items offered in our stores to customers the same day. I’m excited to continue exploring more ways to bring our digital and physical strengths together to serve customers.” 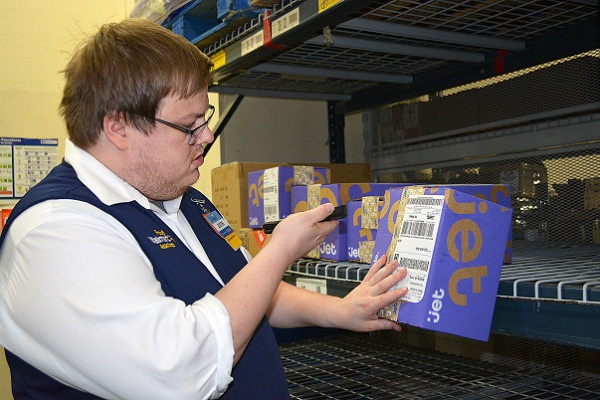 As per the Walmart blog, the initial response from associates and customers has been great. Many orders are being delivered the next day and associates are loving having the option to earn more cash while doing something that’s already part of their daily routine.

Ravi Jariwala, a Walart spokesman, told the Daily Mail that all those employees driving home represent a ‘very dense web’ of potential delivery locations for the company. He also added that, while paying them, the company would comply with all federal and state minimum wage and overtime laws. Participating employees will also have to undergo background checks and will need clean driving records, he added.

Walmart Versus Amazon: Blurring The Lines Between Internet And Brick-and-mortar Commerce

Walmart’s initiative would narrow delivery times and could result in significant cost savings, though the company didn’t provide exact estimates. However one thing is for sure – the lines between internet and brick-and-mortar commerce are slowly blurring as players try to accommodate a variety of shopping preferences.

Take, for instance, ecommerce giant Amazon, which is experimenting more with physical locations now. It’s slowly opening physical bookstores in big cities around the US which double up as showrooms for Amazon gadgets like its Kindle readers and Echo voice-activated speakers.

In another move, it opened two drive-in grocery pickup kiosks in its hometown of Seattle earlier this month, to match the click-and-collect options rolled out by Walmart under Walmart Pickup – the service that enables customers to order items online and pick those items up in any Walmart store, completely free. It also offers discounts to online shoppers who pick up items at stores rather than having them delivered.

The “AmazonFresh Pickup” kiosks let shoppers buy groceries online and pick them up in as little as 15 minutes, instead of having them delivered to their homes. The service is open to Amazon Prime members who pay $99 a year for delivery discounts and video and music streaming. So, while Amazon is experimenting with brick-and-mortar concepts to get a toehold in grocery sales, its competitors like Walmart are adding online options to their existing offline stores.

Moreover, Walmart has also revamped its shipping programme and offers free, two-day shipping for online orders of its most popular items with a minimum purchase of $35, without any membership fees, to compete with Amazon’s popular Prime shipping programme. Members of Amazon’s $99-a-year Prime service in thousands of pin codes can receive orders the same day or the next, depending on the item and location. In about 30 cities, Prime Now members can even get some items in an hour or two.

The move show how retailers are battling all out to reduce last mile costs – which make up a lion’s share of the fulfilment costs. Faster shipping has become a major battle field between online retail and traditional brick-and-mortar stores.

It is no wonder then that Walmart had also previously tested delivery services using Uber and Lyft drivers.

Last June, Walmart had announced a last-mile delivery test through services like Uber, Lyft and Deliv. The pilot was started through tests of grocery delivery through Uber in Phoenix, Arizona and Lyft in Denver, Colorado.

Here’s how it worked for Walmart grocery customers. A customer in one of the test locations would place their grocery order online and select a delivery window. Walmart’s associates would then prepare the customer’s order. They would then request a driver from one of either Lyft or Uber to come to the store, pick up the customer’s order, and take it directly to the customer’s location.

The customer would just be charged the normal $7-$10 delivery charge online and would have to make no payment to the driver. Also, he would also be informed by the company that his order is being delivered by a driver from Uber or Lyft. The drivers would also be alerted in some fashion – perhaps via a text – that these are grocery orders, not passenger pickups, when summoned.

As per Ravi, the pilot is still ongoing.

A similar experiment was done by Flipkart in India in April 2015 when it tied up with Mumbai’s lunchbox delivery men, or Dabbawalas famous for navigating cramped and confusing streets, to smoothen the often difficult last stretch of  customary delivery. The firm had partnered with one union of the Dabbawalas who would initially collect Flipkart marketplace shipments from the delivery hubs and deliver it to customers, while picking their dabbas. Flipkart had also experimented with a crowdsourced delivery model that connected local sellers and buyers with the help of voluntary delivery personnel, reducing delivery time.

Similarly, Gurugram based on-demand hyperlocal delivery services startup Shadowfax is planning to use local kirana (grocery) outlets as its drop points. As per co-founder Vaibhav Khandelwal, customers can either collect items from there or in some cases these kirana shops do the delivery on its behalf.

One thing is clear – as the battle between ecommerce and traditional retail players intensifies, innovation in last mile delivery methods will be one factor that will determine who will win and who will tail. Will Walmart’s plan to leverage its huge physical imprint succeed? Given that right now it’s an opt-in feature only, it is hard to say. For now, the retail giant is not looking to rush the programme, taking a step at a time. CEO Doug McMillon stated in a Q&A session with investors and analysts, “I wouldn’t jump to a conclusion that it’s going to be nationwide too soon. We’ve got a lot to work on there.”

McMillon said the programme will evolve over time. For instance, Walmart may enlist Uber to assist with last-mile deliveries, similar to how the company has used the ride-sharing service for deliveries in its fresh groceries business. How much will this new way of delivery will save on costs after paying the employees will be another determining factor. However, if it is able to figure out a more concrete way to leverage it fully, Amazon will have to put up a formidable fight in its home turf, given Walmart’s gigantic infrastructure spread in the US.