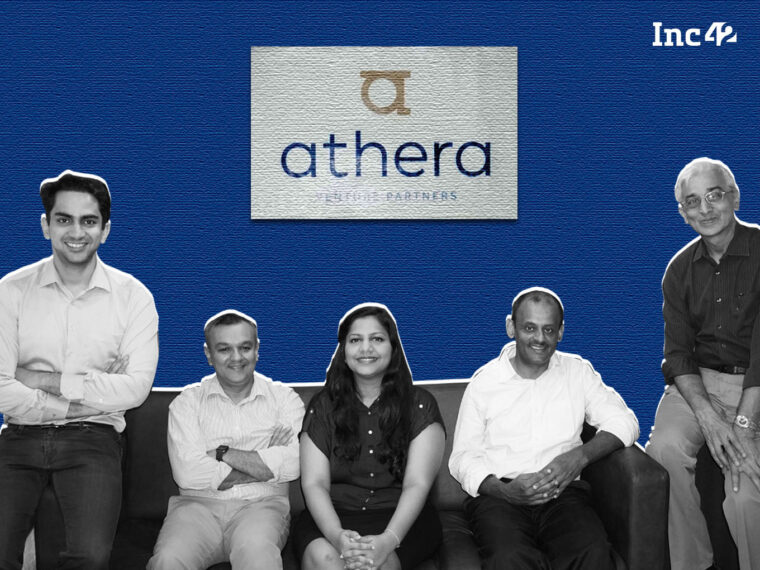 The VC has so far invested in 60+ companies but has an active portfolio of 23 companies, 1 IPO exit and 7 cash exits

Inventus India, a Bengaluru-based early-stage venture capital firm has launched its fourth fund with a target corpus of INR 900 Cr ($120 Mn). With the announcement, the VC firm is also rebranding as Athera Venture Partners.

While the fund has been considered a primarily global investor, the rebranding is intended to emphasise its Indian-centric investment focus with the new fund. The latest fund comes almost three years after the VC closed its INR 369 Cr Fund III in 2019.

Rutvik Doshi, general partner of Athera Venture Partners told Inc42 that the VC firm will have a continued focus on investing in early rounds of tech-focussed startups. It will have a greater emphasis on backing early-stage startups disrupting segments such as IoT, consumer internet, SaaS and enterprisetech, fintech, Web3 and deeptech.

Doshi added that the VC firm plans to back 18 startups with Fund IV as it looks for disruptive tech companies and founders who are in the game for the long run. Of these 18, 12 startups will receive anywhere between INR 15 Cr and INR 35 Cr in their Pre to Series A funding rounds.

For the rest, it will sign smaller cheques between INR 5 Cr and INR 10 Cr. Athera will also write follow-on cheques of up to INR 90 Cr.

The Journey Of Inventus To Athera

Founded in 2006, Inventus Capital Partners (now Athera Venture Partners) is a cross-border firm investing in the US and India. The fund has so far invested in 60+ companies, 13 of which are from its third fund. The VC firm has an active portfolio of 23 companies.

Athera Venture Partners has assets under management worth INR 850 Cr. While the VC firm did not disclose the exact return on investment, Parag Dhol, general partner at Athera hinted that the top 5-6 companies of every fund have been cherry on the fund, returning 5-20X on the invested amount.

Some prominent names, for instance, included redBus from the VC’s Fund I of INR 51 Cr, which individually gave an ROI of the entire fund. Fund I has an IRR (Internal rate of return) of 25%.

In Fund II, PolicyBazaar’s IPO and the acquisitions of portfolio companies such as Aasaanjobs by OLX, Funtoot by Embibe and Unbxd by Netcore, also provided an IRR of 25%, already giving a 5X return on the INR 106 Cr fund.

The partners believe that Fund III is too young to give any returns yet.

“With our new fund, we wish to triple down on the startup ecosystem in India that is on a bullish growth trajectory,” Doshi states. “We recognise that building the next generation of companies requires patient, supportive capital and a flexible and collaborative approach.”

But that has not been the case with many startup investors. For instance, Y Combinator and Sequoia have asked startups to go into ‘survive’ mode, whereas SoftBank has decided to put a pause on investments.

Talking about the market, Dhol outlined, “Venture capital investing is a long-term business where we commit 8-10 years towards helping companies grow and succeed. Good companies take time to get built and in the process, one goes through various economic cycles. The booms and recessions get averaged out when we look at it from this perspective.”

He remarked that some of Athera’s best investments like redBus (2009) and PolicyBazaar (2013) were made during economic downturns because the founders were committed to building sustainable businesses during these times.

“We are confident of the long-term India opportunity, and hence a 1-2 year recession is not a big concern for us,” he said.