Value Of UPI Transactions Witness 22.91% Growth In May: NPCI

Value Of UPI Transactions Witness 22.91% Growth In May: NPCI In a slight fallback for the government’s digital push, NPCI (National Payment Corporation of India) has revealed that for the month of May 2018, UPI (Unified Payments Interface) has recorded 189.48 Mn transactions, a fall of 3.14% from 190.08 Mn transactions recorded in April 2018.

In a Twitter post, NPCI revealed these numbers also giving out statistics for the month of April, a 13% M-o-M growth, and March, a 4% M-o-M growth. 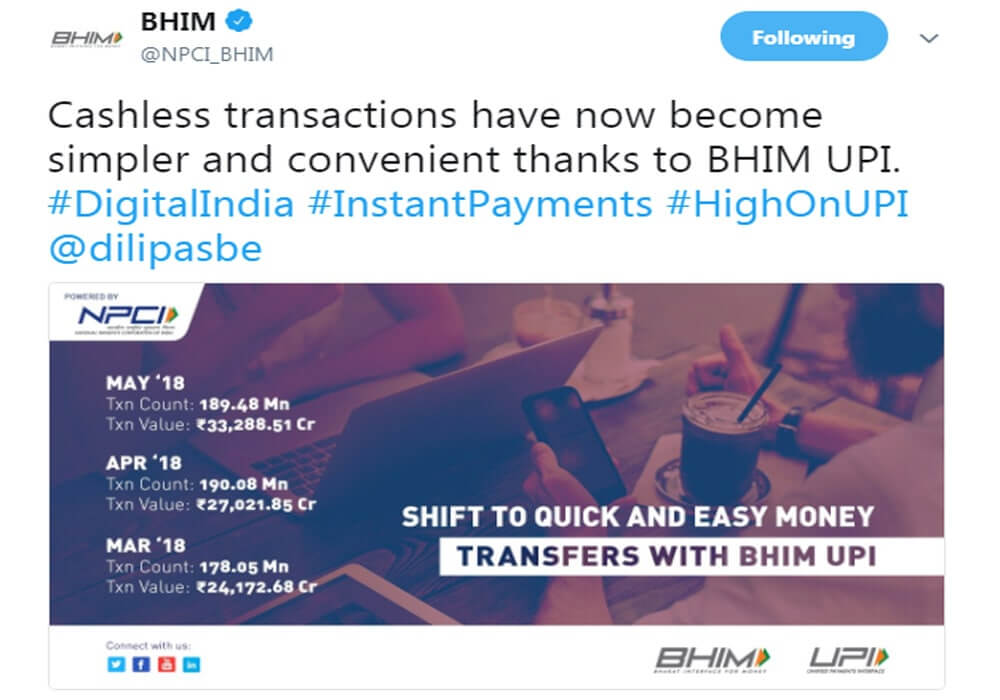 Government Luring In Customers For UPI

Since its launch in 2016, Unified Payments Interface has witnessed huge growth with the cumulative number of UPI transactions standing at 1.12 Bn at the end of April 2018.

Inc42 had earlier reported that to encourage merchant payments, the government will commit nearly $137.93 Mn (INR 900 Cr) in cashbacks and incentives to merchants to increase adoption of the BHIM app. Following this several advertisement campaigns informed users of the cashbacks too. However, there has been multiple users complain cases where they have claimed that they haven’t received that cashbacks promised.

Some of these instances which were highlighted in the Twitter thread of NPCI included claims that users have complained about not receiving cashback for 10 days and still remain unpaid. Some other user claimed that they haven’t received cashback in over 40 days. 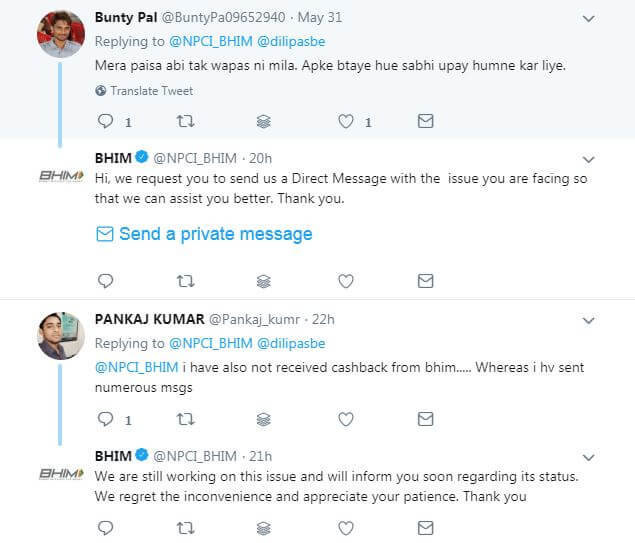 According to the data released by NPCI, of the $2.4 Bn value of UPI-based transactions in January 2018, the government’s BHIM app accounted for over 9.57 Mn transactions worth upwards of $57 Mn (INR 3.65 Bn).

It has also planned to enable UPI-based payments for inward international transactions. The transactions, which were being done through Immediate Payment Service (IMPS) and or National Electronic Fund Transfer (NEFT), can now also be done using Unified Payments Interface.

The growth in digital payments space can be attributed to the availability of its 24*7 platform which has been largely adopted by various digital payment applications including Paytm, Flipkart’s PhonePe, Google Tez and WhatsApp amongst others which provide a number of incentives, including cashback offers in return of digital transactions.

In March 2018, Paytm claimed to be the largest contributor to the overall volume of UPI transactions in the country. The digital payments giant claimed that 40% of all the UPI transactions made in February 2018, amounting to 68 Mn, where made at its platform.

Other digital payment mediums have emerged besides Paytm in the recent time, such as Google-owned Tez which claimed that it recorded over 250 Mn transactions since its launch in the middle of September 2017.

Also, recently reports surfaced that Facebook-owned WhatsApp is ready to roll out WhatsApp Pay next week. With 200 Mn users, WhatsApp is one of the biggest digital payments platform and is ready to cause disruption in the space.

With digital payments continuing to record huge growth, UPI has been attributed as the game changer for the industry.