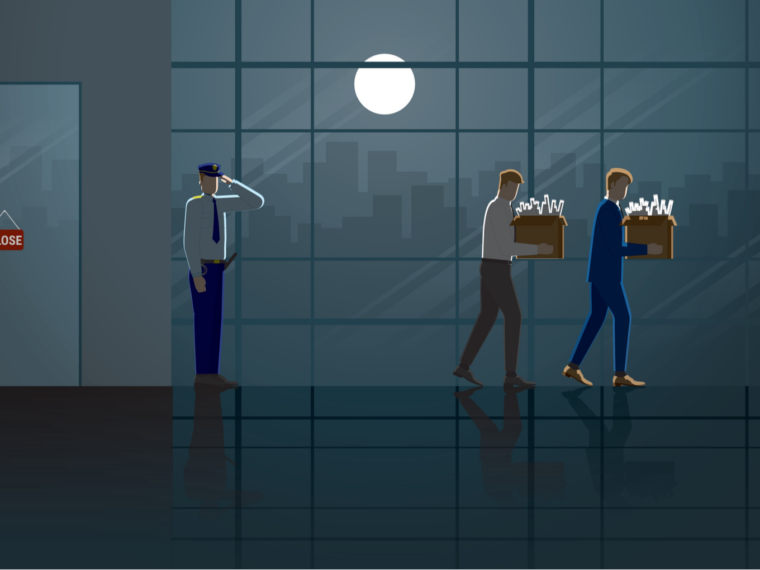 According to Coinbase, it employed 300-400 employees in India, thus, the number roughly stands at 25-30

The laid off employees span across product, engineering and design, besides marketing and HR functions

Across the world, the crypto exchange has laid off 1,100 employees

In April 2022, Coinbase CEO Brian Armstrong, during the launch of operations with UPI in India, stated that the company was looking to hire 1K+ employees by the end of 2022. Only two months later, the US-based startup has gone on to lay off employees worldwide and a small percentage of the Indian workforce has been affected too.

Gupta, in a tweet, added that despite the challenges, India remained one of the crypto exchange company’s top market priorities, where Coinbase will continue to invest in product and engineering teams. 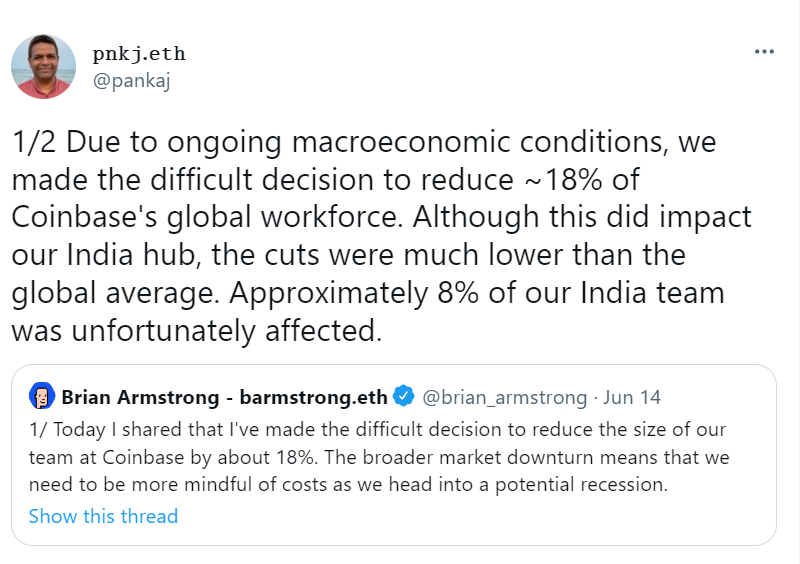 According to Coinbase, it employed 300-400 employees in India, thus, the number roughly stands at 25-30. A quick search on social media platforms reveals that in India, the laid off employees span across product, engineering and design, besides marketing and HR functions.

Coinbase’s laid off employee count has taken the total number of employees laid off in the country to around 10K.

For the laid off employees, Coinbase will provide 14 weeks of severance plus an additional two weeks’ salary for every year of employment beyond 1 year, four months of mental health support globally and help in connecting with open positions at other firms (including portfolio companies from Coinbase Ventures and other top crypto VC funds).

In the note, Armstrong also stated that the employees’ access to their systems was abruptly removed. “Given the number of employees who have access to sensitive customer information, it was, unfortunately, the only practical choice, to ensure not even a single person made a rash decision that harmed the business or themselves,” he said.

The crypto exchange platform has laid off employees – to cut costs and to cope with the ‘funding winter’ alongside macroeconomic factors such as global recession, crypto winter and rising inflation.

“Our team has grown very quickly (>4x in the past 18 months) and our employee costs are too high to effectively manage this uncertain market,” Armstrong said.

He added that targeted resourcing will allow the organisation to become more efficient, and hence the company has laid off employees across functions.

Coinbase’s India Journey & The Roadmap Ahead

Founded in 2012 by Brian Armstrong and Fred Ehrsam, Coinbase is one of the major cryptocurrency exchanges in the world. It operates in varying capacities in 100+ countries, with 90 Mn+ users on its platform and 11K+ partner institutions across the world.

The US-based platform has also invested over $150 Mn in Indian crypto and web3 startups CoinSwitch Kuber and CoinDCX.

Coinbase had launched operations (allowing users to both buy and sell cryptocurrencies) in India on April 7, 2022 alongside the ease of UPI. Three days into launch, Coinbase ended up disabling UPI because of some informal pressure from the Reserve Bank of India, Armstrong said in a statement.

Further, despite the Indian government introducing new tax rules for crypto in the February Budget session, the government has not made its position clear on the legality of crypto in India. The industry is still awaiting the crypto-token regulation bill, which experts have cautioned that the regulatory uncertainty may lead to a brain drain from India.

Despite the setbacks and now the layoffs, the startup looks bullish for the Indian market and has hired former NITI Aayog executive Arnab Kumar as its director for India Market Expansion to build foundational partnerships and operations in the country. The crypto firm is now working on relaunching its exchange platform in India as well.