In budget 2019, minister had proposed interchangeability of PAN and Aadhaar 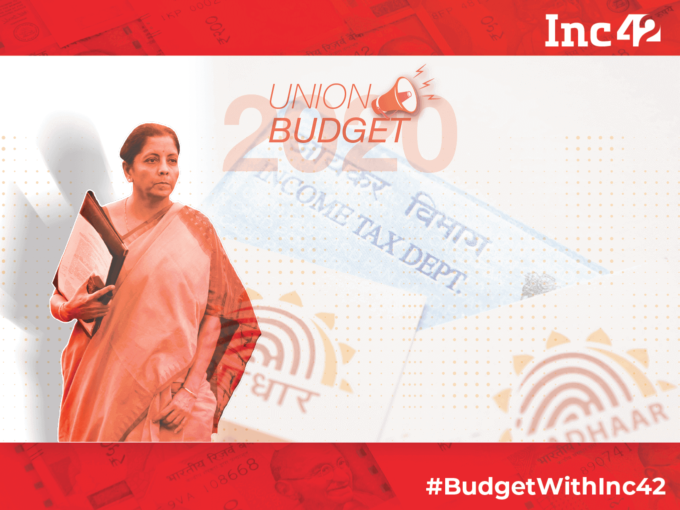 After the Supreme Court of India held Aadhaar as a valid document in its verdict last year, the government has now expanded the use cases for the identity card. Addressing the Lok Sabha today (February 1) to present union budget 2020, the finance minister Nirmala Sitharaman said that the several measures will be taken for improving compliance including Aadhaar-based verification of taxpayers.

The minister said that Aadhaar-based verification will help in weeding out dummy or non-existent units. She also said that a system of cash reward will be envisaged to incentivise customers to seek invoice.

“Deep data analytics and AI tools are being used for the crackdown on GST input tax credit, refund, and other frauds and to identify all those who are trying to game the system. Invoice and input tax credit matching is being done wherein returns having mismatch more than 10% or above a threshold are identified and pursued,” the minister added in her Budget speech.

Aadhaar, on the other hand, is a 12-digit number issued by the UIDAI (unique identification authority of India) to the residents of India after a verification process. The number is connected to citizen’s biometric data, along with their name, permanent address, and mobile number.

UIDAI recently said that 125 Cr Indians have been allotted Aadhaar cards and these holders have used Aadhaar-based authentication services around 37 Cr times (close to ten years after its launch).

After the linking of Aadhaar with PAN introduced in the last budget, the importance given to Aadhaar now for PAN-based verification as well can be seen as the extension to the earlier announcement. During her last budget, Sitharaman had proposed making PAN and Aadhaar interchangeable.

Sitharaman had announced that a person who has already linked his/her Aadhaar with his/her PAN may use Aadhaar in place of PAN under the Act. With this, the Indians without PAN can file income tax returns by quoting their Aadhaar number and they can also use it wherever they are required to quote PAN.

In order to further ease the process of allotment of PAN, the government will launch a system under which PAN shall be instantly allotted online on the basis of Aadhaar without any requirement for filling up of detailed application form, the minister said in her budget speech today.

During the Supreme Court hearings on the legality of Aadhaar, the court ruled that even though Aadhaar could not be made mandatory for non-financial purposes, Aadhaar-PAN link will be needed to file tax returns.

However, the number of privacy breach cases involving Aadhaar has witnessed a spike in recent times which creates a question on the safety of such verifications. Over the last few years, multiple cases of a data breach and user privacy violations orchestrated because of the Aadhaar numbers have come to light. For instance, in February 2019, Aadhaar details of more than 6.7 Mn users containing personal details such as names, addresses and the Aadhaar numbers were leaked on Indane’s website.