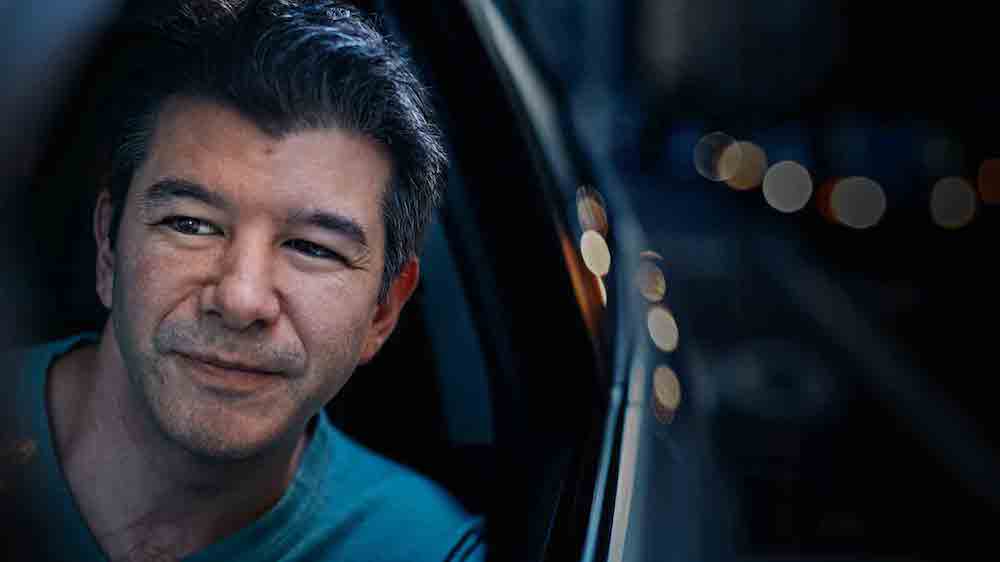 After a year rocked with scandals and downward news spirals, Uber CEO Travis Kalanick has stated that he will take an indefinite leave of absence to grieve for his mother – who died last month – as well as to become a better leader.

In a letter to employees, Travis Kalanick stated, “During this interim period, the leadership team, my directs, will be running the company. I will be available as needed for the most strategic decisions, but I will be empowering them to be bold and decisive in order to move the company forward swiftly.”

The Uber founder also took responsibility for what the company has gone through saying, “The ultimate responsibility, for where we’ve gotten and how we’ve gotten here rests on my shoulders. There is, of course, much to be proud of but there is much to improve. For Uber 2.0 to succeed there is nothing more important than dedicating my time to building out the leadership team. But if we are going to work on Uber 2.0, I also need to work on Travis 2.0 to become the leader that this company needs and that you deserve.”

The full text of the letter goes as follows- After months of issues and scandals, while Travis Kalanick signs off the letter with “see you soon”, however, he might have a diminished role when he comes back. Yesterday, the Uber board has accepted all recommendations given by the Former Attorney General Eric Holder and his law partner Tammy Albarrán, who undertook an investigation of the company’s workplace practices and offer remedies. Holder, an attorney at law firm Covington & Burling LLP, interviewed employees as part of a 14-week probe he conducted with his colleague Tammy Albarran. The investigation team conducted over 200 interviews with current and former employees of Uber who shared a broad range of perspectives while a separate examination by Perkins Coie LLP is reviewing 215 HR claims. The 13-page report can be accessed here.

One of the major recommendations includes “reallocating the responsibilities” of Uber CEO Travis Kalanick and increasing the profile of Uber’s head of diversity Bernard Coleman. The board will move to diminish Kalanick’s role once he comes back by giving some of the CEO’s job responsibilities to a chief operating officer – a position Uber has been actively recruiting for but has yet to fill.

The report states -The Board should evaluate the extent to which some of the responsibilities that Mr.Kalanick has historically possessed should be shared or given outright to other members of senior management. The search for a Chief Operating Officer should address this concern to some extent. 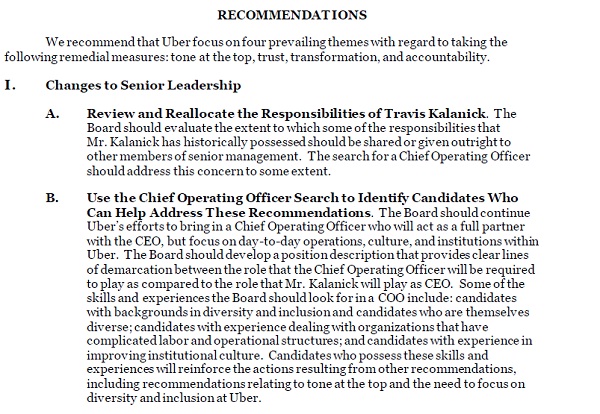 The Holder-Albarrán report also recommends that the company consider eliminating its official “core values” like “Always Be Hustlin’,” “Principled Confrontation” and “Let Builders Build,” principles that “have been used to justify poor behavior.” The report suggests that Uber should reformulate its written cultural values.

Other important changes will be to increase Uber’s board independence from the company, to create a separate ethics and culture committee or similar committees, to use compensation to hold senior leaders accountable. On the cultural side, recommendations include reducing alcohol use at work events and prohibiting intimate relationships between employees and their bosses. It states, “Uber should develop specific and clear guidance concerning appropriate workplace relationships, including making clear that any type of romantic or intimate relationship between individuals in a reporting relationship (either direct or indirect) is prohibited.”

The report also urged the company to enforce strict guidelines on alcohol consumption and use of controlled substances. 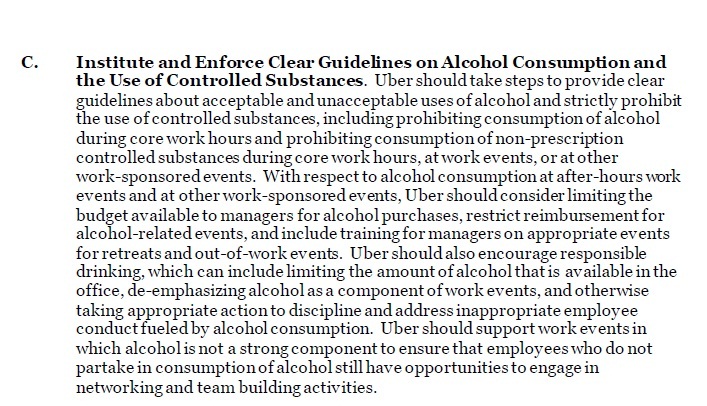 The report also urges to set up a robust and effective complaint process to address harassment, discrimination, and retaliation in the workplace. 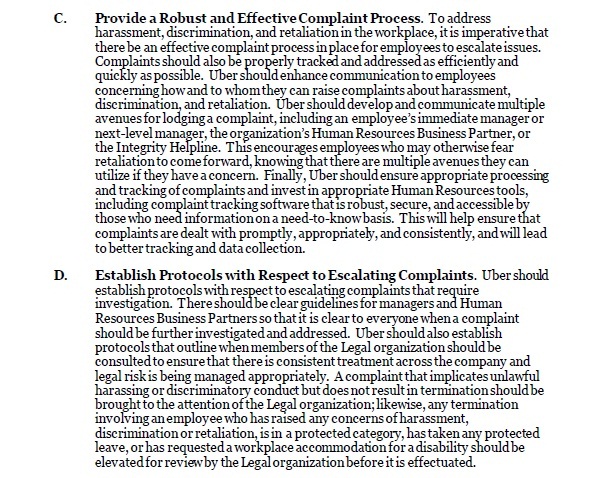 The law firm’s recommendations touches nearly every aspect of the company to revamp it and lays out in detail the kind of internal change needed to make it a more inclusive workplace. Though it is evident that the entire culture mess at Uber is a direct doing of Travis’s own misplaced set of cultural values which contributed to misogynistic and bro culture at the startup, yet the hasn’t laid blame on him squarely. It left him off lightly, recommending only that a chief operating officer be appointed to take on some of his responsibilities.

While Travis has stated his intention to come back with Travis 2.0 as Uber works to become Uber 2.0, only time will tell if he will be able to resume his position back in entirety.

Arianna Huffington, an Uber board member stated, “The process was longer than we thought and more painful than we thought, but this chapter comes to an end today.  Our task now is to learn, rebuild and move forward together to write Uber’s next chapter.”

Will the driverless company at the moment be able to drive itself away from the web of scandals it has gotten itself into towards a better culture? Only time will tell.

Meanwhile, here’s a look at the Uber’s timeline of scandals this year.

Uber And Travis Kalanick: A Year Of Issues And Scandals

In January this year, Uber came under a negative spotlight after it suspended surge pricing during strikes at JFK Airport in New York City. This resulted in a public outrage and initiated a new movement: #DeleteUber, a social media campaign encouraging people to delete the Uber app and their accounts with the company.

While Uber’s hyper aggressive and insensitive image in the media started around the time reports poured in that Emil Michael had suggested that the company should consider hiring a team of opposition researchers to dig up dirt on its media critics, subsequent years have revealed that it was all an outcome of the brash bro culture set up by Travis. Hopefully, after all these expulsions and implementing the desired recommendations, Travis Kalanick and Uber can indeed come out with stronger 2.0 version.