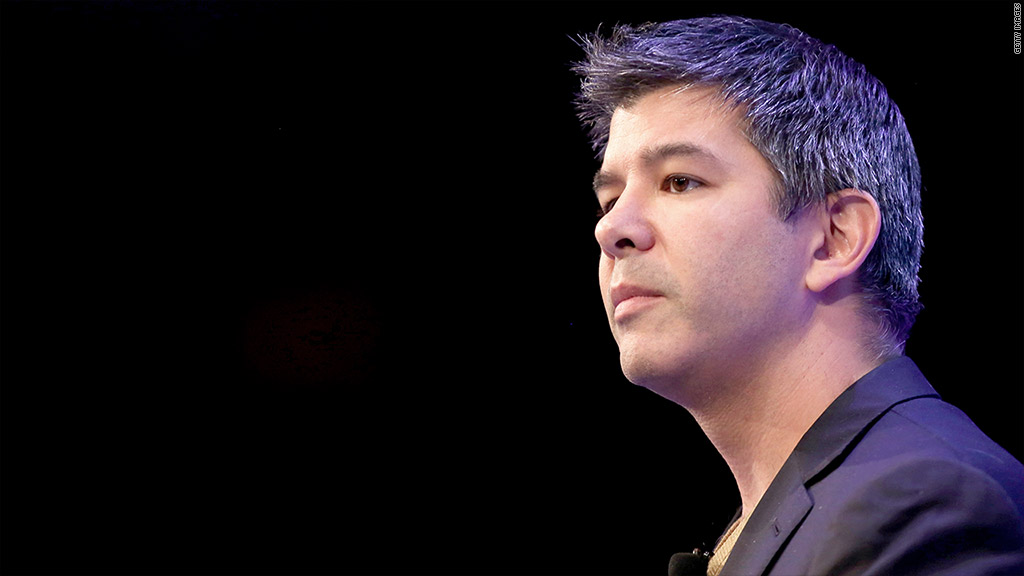 Cup of woes for Uber are overflowing day by day. In another major blow, the company is being sued by a woman who was raped by an Uber cab driver in Delhi in 2014 for illegally accessing her medical records.

The news comes after a week of Uber firing APAC head Eric Alexander, who had obtained the medical records of the Delhi rape survivor and shared the records with CEO Travis Kalanick and SVP Emil Michael in addition to numerous other executives at the ride-hailing company.

As per a New York Times report, the woman, identified only as Jane Doe, a resident of Texas, is suing Uber and CEO Travis Kalanick, as well as Emil Michael and Eric Alexander, for intrusion into private affairs, public disclosure of private facts and defamation.

The survivor stated in the suit that the three executives speculated her rape, in 2014, may have been part of a conspiracy hatched by a competing ride-hailing company or a taxi company.

The suit mentions that, “Uber has taken startup culture, in which “fierceness” and “always be hustling,” two key “Uber Competencies,” are prioritized above people to a new extreme, perpetuating rape culture and violating all bounds of decency as to customer privacy.”

It also adds that, “Uber executives violated her a second time by unlawfully obtaining and sharing her medical records.” 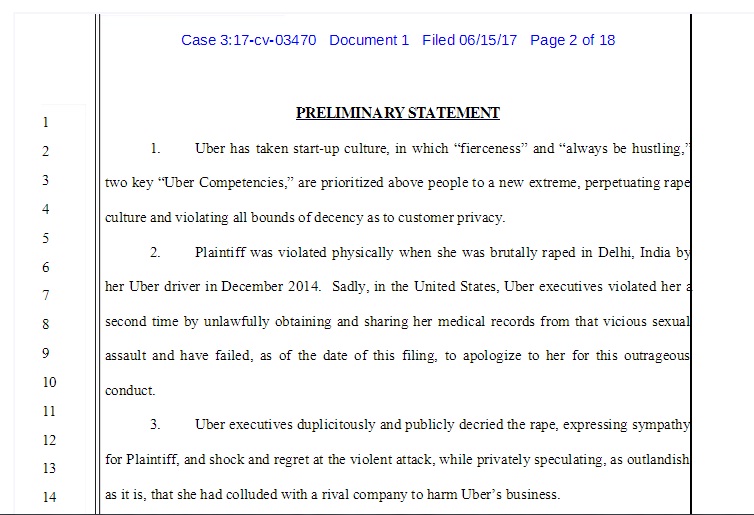 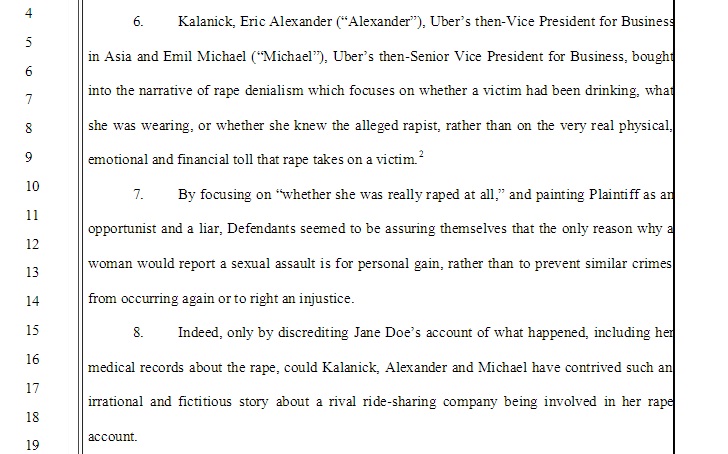 The entire Doe Vs Uber suit copy can be accessed here.

Jane Doe has filed a suit in a Court in California seeking damages and injunction against Uber. The suit states that she is “devastated” by the acts of Uber and its executives who “who have intruded into her very personal medical records from her sexual assault and callously disregarded her privacy by sharing their contents across the company.”

Douglas wrote to ET stating, “It is shocking that Travis Kalanick could publicly say that Uber would do everything to support our client and her family in her recovery when he and other executives were reviewing illegally obtained medical records and engaging in offensive and spurious conspiracy theories about the brutal rape she so tragically suffered. Rape denial is just another form of the toxic gender discrimination that is endemic at Uber and ingrained in its culture.”

Meanwhile, in a statement, a spokesperson for Uber said, “No one should have to go through a horrific experience like this, and we’re truly sorry that she’s had to relive it over the last few weeks.”  According to news reports published at that time, the woman had voluntarily “ended lawsuit” against the company and that a settlement of “more than a million dollars” was made in September 2015.

Uber: No End To Controversies

The rape case had caused much uproar at the time, for Uber had come under fire for its lax background checks as the driver had been found to be already awaiting trial for at least four other criminal charges. The accused was arrested later and sentenced to life imprisonment.

Meanwhile, the Indian government having found its security measures lacking had banned Uber from operating in Delhi, which wasn’t lifted until June 2015. In the aftermath of these developments, Uber was forced to reassess all driver screening processes and evaluate additional screening options to include background checks on its drivers in India.

This lawsuit is the latest blow for Uber, which has endured a spate of scandals in the last few months. The ongoing onslaught has led to Uber CEO Travis Kalanick taking an indefinite leave of absence and the Uber board accepting all recommendations given by the Former Attorney General Eric Holder and his law partner Tammy Albarrán, who undertook an investigation of the company’s workplace practices and offer remedies.

Uber’s board has decided to rewrite the culture of the company which has been receiving extensive flak after revelations were made regarding the misogynistic and hostile work culture, this year. However, the violation of privacy and the attempt to discredit a rape survivor by obtaining her medical records and indulging in alleged ‘denialism’ is yet another low for the cab-hailing company.

Douglas added, “Hopefully, this lawsuit coupled with the changes recommended by the independent counsel will create real change and reform at Uber and elsewhere.”