Uber is in the news and for all the wrong reasons, again! The company already had a unforgettable 2014 when the Uber rape case surfaced which led to company nearly being kicked out of the country. The incident made lives of several taxi aggregators miserable. While the company has taken a number of steps to increase passenger’s safety, an incident regarding molestation by an Uber driver has come up. The driver was accused of forcibly kissing a woman passenger who used the cab service in Gurgaon at night.

The victim’s brother complained to the company but got a templated reaction from the company. He posted the following response his sister got on Facebook. 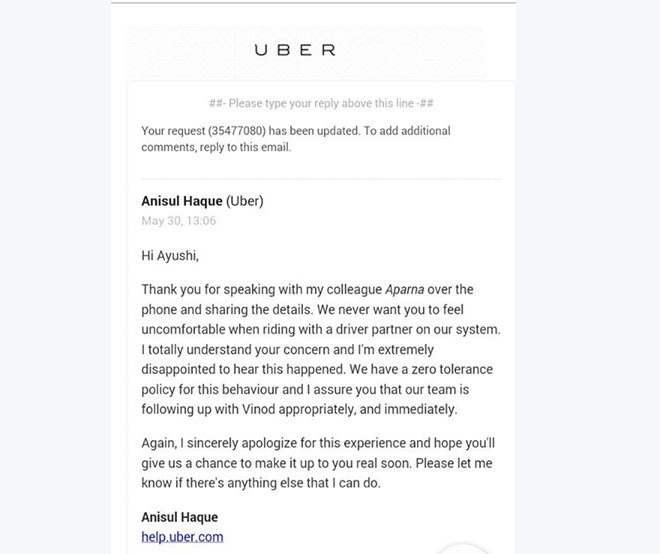 To this, Uber replied to his facebook comments to assure him that action has been taken against the driver as the company has a zero tolerance policy.

To prevent these incidents, Uber took some measures like partnering with First Advantage of have a deeper background checks on its drivers and introduction of an SOS button in all its cabs but it looks like these measures are of no avail when the driver does something inappropriate.

Despite all the ire received by customers on its last case, Uber is blemishing all cab aggregators as its so-called provisions are proving frivolous. People rely on app-based cab services because of their safety and convenience but Uber is proving otherwise, which makes us question “Can we still trust Uber?” Is this the truth behind company’s “safety manners” which seem to exist just fro name-sake?

Citizens are appalled by this incident and Uber’s insensitivity to the same. It is necessary for Uber to earn its lost trust or the company may face wrath of public.