Taxi hailing company Uber has launched a new service called UberINTERCITY today and as the name goes – the app will now allow commuters to travel between cities. The service currently, allows travellers to book cab for travelling between Mumbai and Pune, at a rate of INR 3,999.

This service is already up (May 2, 2015), however it will be offered for a limited period of time until further notice. This new service by Uber is India specific and has been rolled out due to increasing demand from travelers who travel frequently between the two cities.

A minimum balance of INR 3,999 is required by the travelers in their PayTM wallet to request UberINTERCITY, the fee will be inclusive of all taxes and tolls. Uber has also announced that, people who wish to share rides with their friends can split the total amount (making it amongst the cheapest options in the market).

How Can You Book An Inter-City Uber Ride? 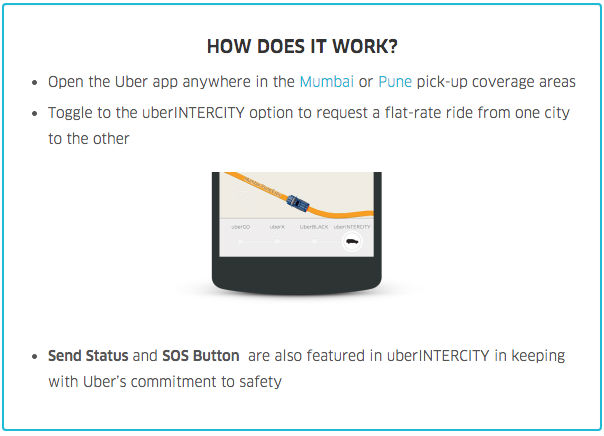