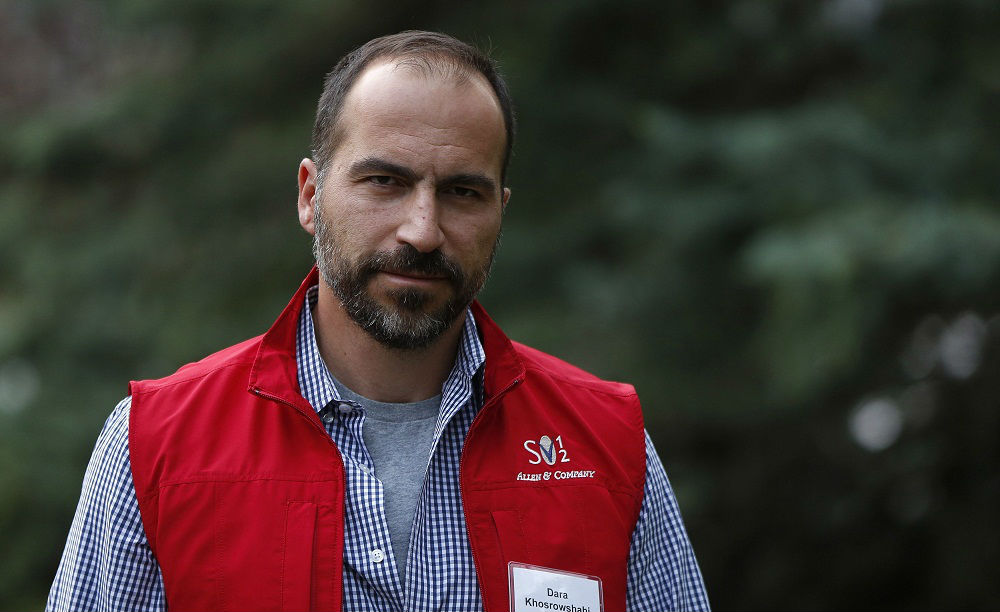 After months of contentious search, Uber has finally chosen its new CEO to lead the company out of turmoil since founder Travis Kalanick resigned from the post three months ago. As per two undisclosed sources, Dara Khosrowshahi, who leads the online travel company Expedia, is set to be its chief executive.

Dara Khosrowshahi emerged as the leading candidate from a final list of three candidates which included Jeffrey R. Immelt, the former chief of General Electric and Meg Whitman, the chief of Hewlett Packard Enterprise. While the board was leaning towards Meg Whitman, as per sources, Whitman could not agree on terms in which she would take over as chief executive.

Then Jeffrey R. Immelt, the former chief of General Electric, withdrew on Sunday when it became clear that he did not have enough support. He tweeted his withdrawal yesterday. 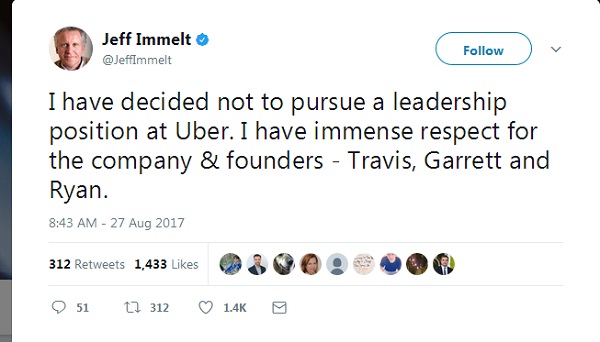 Ultimately, the board decided to settle on the third candidate Dara Khosrowshahi. As per The New York Times, Uber, the company’s board and Expedia have not yet responded to requests for comment.

Dara Khosrowshahi joins Uber at a time when it is crucial for the $70 Bn company to return to stability after Travis Kalanick stepped down from the CEO job under investor pressure on June 20. Kalanick’s resignation came after a year of scandals and currently he is also being sued by early investor Benchmark Capital accusing him of fraud, breach of contract and breach of fiduciary duty.

Read here the complete list of scandals which the company has been embroiled in, in 2017.

While Jeffrey R. Immelt was not able to garner support as he did not have the software experience that some board members deemed important for the Uber chief executive role, it is also being speculated that Immelt withdrew his candidature as he considered Uber’s board to be dysfunctional.

Meg Whitman, meanwhile, had a solid experience given that she had led also led eBay and as a female leader, could afford Uber the chance to improve its workplace image. However, apparently, she had issues about what role Travis Kalanick would play in Uber’s future as well as the current legal tussle over board control between Kalanick and Benchmark. Sources stated that she and the board could not agree on some of those matters and, hence, the board had settled on Khosrowshahi. At one point, former Google and Softbank executive Nikesh Arora was also reported to be in the race for becoming the new Uber CEO.

Dara Khosrowshahi, who has been President and CEO of Expedia since 2005, the world’s largest online travel agency by bookings, has experience in a digital industry which, like Uber, is concerned with logistics and movement of people. The publicly traded company is smaller than the privately-held Uber, with a market capitalisation of around $23 Bn in comparison with Uber’s private valuation of nearly $70 Bn. In 2015, he was the highest paid CEO in the country, mainly because of a nearly $91 Mn stock option grant. He is also on the board of the New York Times Company and sports merchandise company Fanatics Inc.

Khosrowshahi, whose family immigrated to the United States from Iran, has been an outspoken critic of President Donald Trump, blasting Trump’s travel ban, which includes Iran, as “inward-looking” and “reactionary.” Expedia even filed a legal challenge to the ban. At Expedia, he has led a string of acquisitions since 2014, buying Airbnb rival HomeAway Inc for $3.9 Bn, Orbitz Worldwide Inc for $1.3 Bn and Travelocity for $280 Mn, thus forming an expansive online travel empire.

All these scandals have made Uber’s future murkier and left investors worried. It remains to be seen how much of an impact new Uber CEO Dara Khosrowshahi can have on Uber given Travis Kalanick still remains on Uber’s board. The board itself has been reeling with discord, especially between Kalanick and Benchmark.

(The development was reported by The New York Times)