Bengaluru-based consumer SaaS firm Typeset, which provides an academic writing platform for researchers, has raised $850K in a Pre-Series A funding round from Haresh Chawla, a partner at True North (previously, India Value Fund), in his personal capacity.

Haresh Chawla had initially invested in the venture in 2015. The investment will be utilised towards expanding the platform features across the research communication workflow. The startup is also in the process of setting up the US entity, as shared by Typeset co-founder Saikaran Chandha in an interaction with Inc42.

Commenting on the funding, Haresh Chawla said, “It’s been fantastic working with the Typeset team for over two years now. They are attacking a tough problem in a massive market and have the potential to become one of the successful global B2C companies from India”.

Ideated in late 2014 and launched publically in mid-2017, Typeset is a brainchild of Saikiran Chandha and Shanu Kumar. The consumer SaaS startup has been positioned as a unified research communication platform, tapping the $25 Bn scientific publishing market, as shared in a company statement.

It provides a single platform for authors to collect, write, build and submit their academic papers. Researchers and students use the platform to write research papers, thesis, assignments, and reports.

“Millions of researchers submit their manuscript to science journals for publishing, every year. With less than 10% chance of getting published, authors battle lack of research-specific writing tools, tedious guidelines, and fuzzy submission procedures,” said Saikiran.

He further added, “Typically an author has to use four to five different tools to collect, write, format, collaborate and submits their research paper to his/her target journal. On top of this, an author has to go through an average of 20 steps to get her paper submitted, and this is even before peer review! The experience is fragmented.”

Typeset aims to change all this and it seems the process has already started. Within three months of launch, more than 11K researchers from 103 countries are writing on the platform. These users come from major organisations such as CERN, NASA, ETH Zurich, Stanford, MIT, etc. The duo is adding nearly 5000 users per month, and at the moment, the users are completing 120+ academic papers per week on the platform, with almost 95% of new users coming via word of mouth.

Monetising As Well As Striving For Unique Positioning: How Typeset Is Doing This?

The first differentiator Typeset boasts of is the ease platform provides to the researchers in writing and getting the final version of their thesis. “We have created a Universal Manuscript Editor for researchers. This intelligent editor brings down the formatting effort down to zero. The editor is built for scientific content creation i.e. math, figures, citations and scientific-tables can be easily created,’ said Shanu.

In order to cite references easily, a Reference Library has also been integrated within the editor. Authors can write their content on the platform and in a click get their paper formatted to any research Journal’s guidelines. 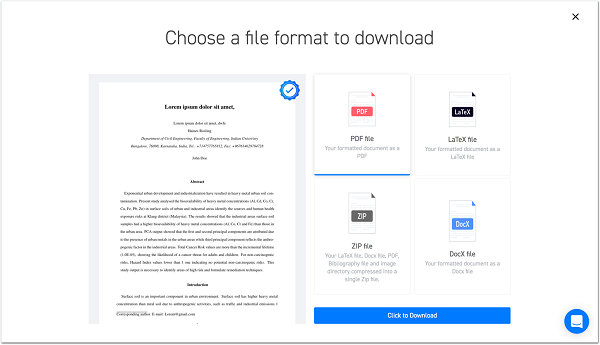 While, for any new technology, to get people pay for it is a tough job. Typeset, however, doesn’t have to struggle much here. Within a few weeks of launch, the founders were able to get paying customers and are still counting. The business model is subscription and licensing based on a three-layered product stack:

Despite all the ease, the Typeset founders do have their share of challenges. As shared by Saikiran, “We made “not-so-great” hiring decisions in the beginning when we were bootstrapped. This delayed the beta launch and created a huge technology debt.”

Nevertheless, the company is now going ahead with a team of 25 and will be soon a 33-member team. As claimed by the company, the team comprises of people from prestigious universities and organisations around the world such as IIT, IIM, NUS, NID Stanford, Flipkart, etc.

Why Typeset Would Flourish In Crowded Consumer SaaS Space

Platforms such as Typeset.io fill in the industry with a fresh breath of air, at the same time solving a complex problem at large scale. However, Typeset.io is not alone in the global consumer SaaS space. The competition comes from players such as Authorea, ShareLaTeX, Overleaf, Microsoft-word and even Google Docs.

But, the Typeset founders seem undeterred with this competition. As Saikiran mentioned, “Authorea, ShareLaTeX, and Overleaf require users to learn LaTeX and are not user-friendly. Only 5% of the research submissions are done in LaTeX. Microsoft-word and Google-docs are not built for research content creation and thus lack critical features such as auto-formatting, structured-XML output, and journal templates. Also, none of the competitors provide an end-end workflow integration such as peer-review, reference library, and single click submissions as well.”

As further stated by Haresh, “Very simply, it’s product thinking- one runs into very few teams that are so focused on creating a unique world-class product. Writing experience is broken for all the research products on the web. Existing players undervalue the merits of a good authorship experience. Consumption experience on the web is yet another problem as most publishers just put up static HTML pages.”

He further added, “With powerful web technologies, this experience can be better. Typeset team has understood this problem well and are providing a great user experience, which is critical in capturing this market.”

Typeset founders are further planning to ease out things for the researchers in near future. The team is working to bring on board features such as Plagiarism check, Advanced grammar check, Workspace management and an AI-powered Augmented writing feature. While Typeset may be considered a viable, sustainable and revenue generating venture in the global consumer SaaS market, with Indian mindset of working majorly on the ‘free’ portion of the freemium models, how well this platform can monetise in its own country, will be worth watching.