“We Want TVF To Be India’s Answer To Disney” – Arunabh Kumar, Founder, TheViralFever

“We Want TVF To Be India’s Answer To Disney” – Arunabh Kumar, Founder, TheViralFever 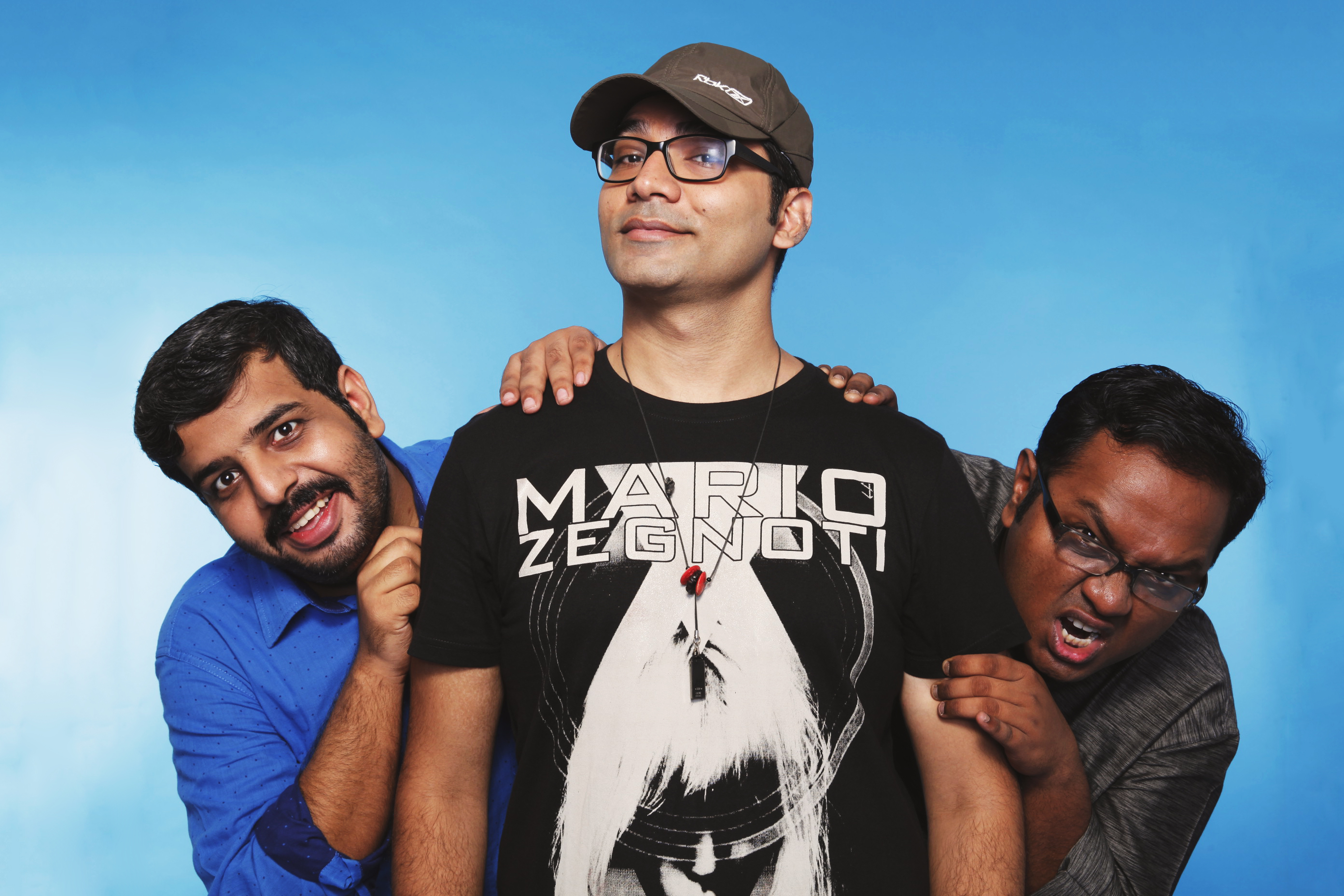 TVF Pitchers’ first episode that aired on 3rd June “TU BEER HAI” has potentially become India’s analogy to “Stay Hungry, Stay Foolish”. Pitchers is a story of three college friends stuck in the mundaneness of corporate life and are now seeking an escape into the startup world. The show seems to have been very well-timed given the mainstream attention that startups are getting thanks to the recent Housing recent fiasco, Zomato’s acquisition drive and ecommerce giants like Flipkart and Snapdeal featuring on the front page of major newspapers.

The story has beautifully crafted out the emotions & the ups and downs of the startup life, characters are well thought out and humor is bang on on the TVF meter.

The Viral Fever Media Labs, popularly known as TVF was founded by Arunabh Kumar (an IIT Kharagpur Alumni and known as TheQtiyapaGuy). It is an online youth entertainment network focusing on the funny side of Indian politics, movies, lifestyle, social system and now startup life too. With offices in Mumbai, Bangalore and Delhi, TVF is now a 100 member team creating some kickass video content.

In February 2015, TVF became the first YouTube online network to attract one million subscribers on the basis of original content within the shortest time. TVF generated revenue of about $628k (INR 4 Cr.) in 2014-15, starting from June last year.

While many media outlets and people calling TVF Pitchers as the Indian Version of Silicon Valley, Arunabh says that both the story lines are quite different. Pitchers is a much more realistic version set in the Indian context, while Silicon Valley is a more humorous take on the extreme activities and the scenario that is now seen in the Bay Area. TVF has been able to bring in the much required element of humour and the show is quite relatable for the common man working in the Indian IT industry.

We caught up with the TVF team to understand about their vision, what they think of video production in India and about their new series TVF Pitchers.

Here are the edited excerpts:

Inc42: Why host videos on your own site, TVF Play vs going for Youtube?

Arunabh Kumar: TVFplay.com is nothing but new theviralfever.com for providing all tvf content at one place. We don’t harbour any other ambition that becoming more powerful as creators and the best studio. We think, this country and globally there are some awesome players like hotstar, netflix etc. and we don’t think we have even 0.0001 % of the amount of content they have. Our platform is a place for providing our fans all of TVF stuff at one place. We would like to be positioned more as Audi, than a maruti and so our FOCUS is making awesome shows , thats it.

Inc42: Why the sudden trend of online companies getting into video production and TV shows?

Biswapati Sarkar: The ‘trend’, I feel, had started around late 2012. It has probably taken a lot of time for people with slower net connections to catch up to it. We made our first 3 episode series called ‘Aadha 24’ in December 2013. Regular programming of Qtiyapa and ‘Chai Sutta Chronicles’ from our channel had started at least a year prior to that. At least a dozen web-shows were launched since 2012 in India.

But, post the success of ‘Permanent Roommates’, probably a lot of people got encouraged to try their hand with long-form storytelling in a democratic medium. The show perhaps re-defined the idea of what and how an online show can become. A lot of people recognized that even a quality drama show can find its audience online. I hope ‘Pitchers’ can elaborate the definition even further.

Inc42: What’s the plan to monetise these kind of video productions?

Amit Golani: Right now the focus is on streamlining the content generation. We treat and approach our content on par with any Good Shows and series out there. Thus put in the same effort and resources to it, which in turn leads to the audiences treating it the same way. I believe with a lot of effort we have made a reputation of not being guys who make ‘Videos’ but the Brand that is producing Awesome shows.

Monetization of such shows has been cracked long back, where in good content attracts viewers and thus Brands, both of whom are willing to pay. However the big difference with respect to brands that has come up recently is that instead of just adding a ‘Brought to you by’ slate to such shows, the shows are being created around a core essence of the brand. For eg, permanent roommates although a RomCom revolves around the couple hunting for a house to move into, and hence the brand commonfloor fits and becomes an integral part of the story automatically.

Inc42: Will TVF try to enter into online video content as a business model too? I am talking about the likes of ScoopWhoop and Buzzfeed. While the others first captured the online platform through text and video content (aggregated from the web) and then went for the in-house production. In your case can it be a possibility of TVF entering into online and aggregating content along with your in-house video content?

Arunabh Kumar: TVF’s core competence and goal is content experience, and we want to grow more powerful as creators. We have managed to become one of the coolest and best Brands in India on the bank of our content and that’s why TVF is loved by million youngsters today. We dont want to be Scoopwhoop or Buzzfeed cause they are not about content creation but just content hacking and aggregation. They are essentially platforms with barely any original content till now and they may want to become creator as well, as seen from there series n channel but TVF would like to focus and be ACE in what we know best, that is content creation. Everything else are semantics, and keeps changing with time and technology. We want TVF to be India’s answer to Disney. 🙂

Inc42: What was the thought process behind the script of this particular series?

Biswapati Sarkar: We wanted to do a show on the sub-culture of entrepreneurship in India and how the meteoric rise of new companies is exclusive to our generation. We wanted to present a realistic world of people coming together, quitting their mundane jobs and aspiring to create something beyond their dreams. This season is essentially the origin story of these young entrepreneurs.

Inc42: Why such a sudden interest on doing content, videos and everything around entrepreneurship?

Biswapati Sarkar: I bet even you guys, the inc42 writers have been asked this question. Perhaps way more than us. Why entrepreneurship? And not film reviews or travel blogs or celebrity gossip? I feel there is no specific answer to that question apart from the fact, that it interests you. Because we are doing a show on entrepreneurship, we are bound to make content and videos and everything around that theme. There is an interesting story to tell and there is a new show to promote. If tomorrow we were telling the story of a silk weaver in Varanasi, we would start creating content which brings the viewer closer to the universe of the story.

Inc42: Do you think startups and entrepreneurship has come into the main league even when it comes to entertainment?

Biswapati Sarkar: No. I don’t think the Indian entertainment industry has ever told the story of a contemporary startup. There have been elements of starting a company in Rocket Singh, but a holistic take of an entrepreneurial journey in the world we live in today, has never been done in traditional or new media. But, I hope thematically it comes into the main league after Pitche

Inc4: Can we see TVF raising funds the way startups are raising? If so, for what exactly?

Arunabh Kumar: We are in talks with several partners in regard to raising funds and will use it for creating the coolest shows India, online and otherwise.