Fall In Love With An Idea And Just Go After It: Travis Kalanick, CEO Uber

Fall In Love With An Idea And Just Go After It: Travis Kalanick, CEO Uber 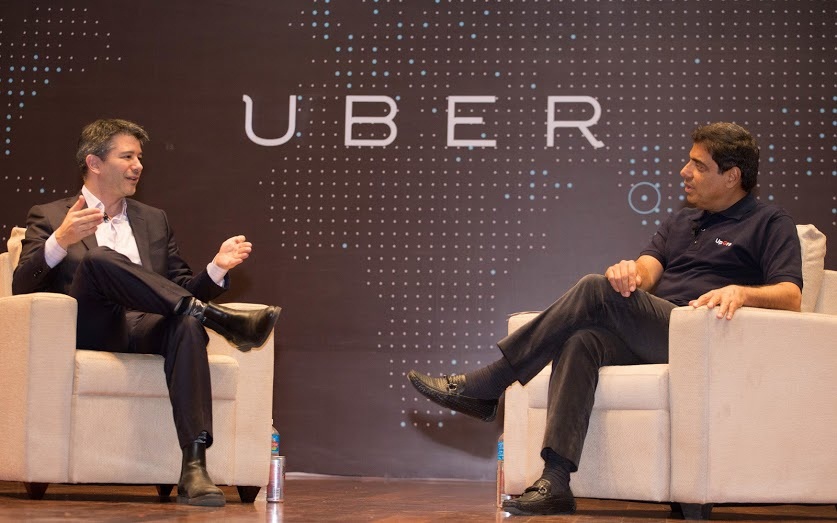 He came, he spoke, he awed!

These words sum up the boundless entrepreneurial passion and swagger of Travis Kalanick, CEO Uber, who enthralled IIT Bombay students this week in a fireside conversation with media industry veteran and serial entrepreneur Ronnie Screwvala. In an one hour session, Travis shared his views on topics ranging from dealing with failure to the importance of co-founders and mesmerised the students with his quick wit, his go-getter attitude, his passion, and unbridled enthusiasm for entrepreneurship.

Here are the excerpts from the session:

Have A Champion’s Mindset

When questioned about an entrepreneur’s attitude towards failure, Travis spoke about developing a champion’s mindset. He said,

Travis also added that failure is also about how you assess risk and as an entrepreneur, one has to think about failure and risk differently. He added, “If one thing doesn’t work out, there are a thousand other companies that will hire you. If you are smart and it doesn’t work out, there will be something on the other side of that. And you will be way better and way smarter for having tried something that nobody else tried. You have to think about failure and risk differently.”

When Ronnie questioned him about his biggest failure, he referred lightly to his first company Scour where he got sued for a trillion dollars, which at that time was the GDP of Sweden! However he stated that as per him, real failure meant not putting everything he had into a problem. Saying that, he also added that while one should keep on going if one believes in what one is doing, but one should know when to move on. “If keeping going means that you will do severe physical and mental damage to yourself, you should move on. In my last company I got to that point. I knew if I kept going, I would go crazy.”

R&D & Innovation Is No Longer Just a Silicon Valley Thing

Speaking about the rapid progress of the Indian startup ecosystem, Travis stated that innovation is no longer just limited to the Silicon Valley. He said in unequivocal words,

There will be global technology hubs in the world. And leading those are the three bays, Bay Area, Beijing and Bangalore. The quality of minds coming from IITs is phenomenal. All we need to do is just start building things.

He added that even the startup funding environment has gone global. Now, there were many funds which just want to invest in India.

Recapitulating the moment when he realised that people from IITs will drive innovation, Travis stated, “My job as an entrepreneur is to see the future. And, I clearly remember the moment in time when I realised people from IITs will drive innovation. That was when PM Narendra Modi was in Silicon Valley last year, meeting global CEOs of firms such as Adobe, Google and Microsoft. And all of them were sons of India. That’s the moment I realised innovation is about to go global.”

Fall In Love With An Idea, And Just Go After It

Speaking about entrepreneurship, Travis stated that an entrepreneur’s way is going at the world and looking at problems. He said, “ It’s  a curious mindset, you have to find a problem you fall in love with and have the fierceness to go solve that problem, push until it hurts, otherwise someone will do it. So an entrepreneur’s way is constantly looking for things that will make somebody go wow, getting someone interested in an idea that can become real. Fall in love with an idea, and just go after it. And when you do that, win or lose, if you put your all in it, it’s a worthwhile endeavour.”

He added that everyone has an idea, but an entrepreneur is the one who just goes out and does it. While having a straightforward idea to implement helps, but one needs to have enough guts to go out and just do it.

Travis added that one of Uber’s values is always keep hustling, and joked that the Indian equivalent would be to “Always be jugaading!” “The jugaad will get you your funding and get some things working when things are not quite working.”

Don’t Wait For Your Investor To Tell Anything

“Don’t wait for your investor to tell anything. Building is playing a 3D chess. The investor comes once a month or quarter, he doesn’t even play chess. Your job as an entrepreneur is to be an expert chess player and see the moves so far ahead that when an investor suggests a move, you should be able to say I thought about it, it’s an interesting move but here are the 1800 reasons why it doesn’t work. And there is the move that for 3650 reasons is the right move, and when you explain the full complexity of it for one hour 20 minutes, you will never get a question again!”

He added that an entrepreneur has to have a strategy for how he is going to win, and essentially have a positive expected value that comes out of his investment. A statistical probabilistic approach, plus some guts, some vision and some sweat is what is required.

If You Do It Alone It Will Be Incredibly Lonely, You Got To Be Up For That

Speaking on how the topic of having/ not having a co-founder, Travis stated that it is a personal choice depending on one’s style and personality. While it is not absolutely necessary to have a co-founder, but one needs to remember that if one does it alone, it will be an incredibly lonely journey and harder in the tough times. He said, “If you do it alone it will be incredibly lonely, you got to be up for that. Especially in hard times, it helps when you have someone to have jam with, more so when you are small.”

I Don’t Know Where Uber Will Be In Five Years

When questioned by a student as to where will Uber be in the next five years, Travis stated that it was hard to say. He summarised his journey as, “ The way to describe Uber’s journey is that you are in a car, you are driving down pretty fast, and it’s pretty foggy. You definitely don’t have time to look back and see where you were, and you can only see so far. I don’t know what it is going to be in five years, but our mission today is reliable transportation like running water, everywhere for everyone.”

Competition Makes Us Work Harder For The Riders And Drivers

Speaking about the competition Uber faces in India, Travis acknowledged that he sleeps two hours lesser because of the competition! But he acknowledged that it makes them work harder for the riders and drivers. Said Travis, “January last year we were at 4% market share in India. January this year we are at 40%.  And three of India’s top five cities prefer Uber.”

Similarly, speaking about the fact that no internet company outside of China has succeeded in China in a big way, Travis stated, “But that’s the thing. Doesn’t that make you want to try and show that it can be done? Because my question is are you saying no internet technology company is ever going to make it in China? Or is some time in our history moving forward at least one company that does it? So why can’t I try? And then you get to work because that’s hard.”

User’s Guide To Fierceness – Knows What Is Right, Fight For It, & Don’t Be A Jerk

When questioned about an entrepreneur about tackling resistance to change, Travis replied that at Uber they follow the user’s guide to fierceness which means knowing what is right, fighting for it, and not being a jerk. He added, even when lot of people don’t want change but if it means progress, then it is the right thing to fight for. And as long as one is not being a jerk, one is probably doing the right thing to fight for it. He summed it up as, “I believe the right thing should be fight for. You should not pretend nor shy away from the fact that you have to fight for it.”

In the end, Travis reaffirmed his highest regard for engineers as problem solvers by sharing his email id with the IIT Bombay students, asking them to write to him! No wonder, the CEO of the most highly valued tech startup in the United States, which has actually led to the word ‘uberize’ to the dictionary, left the audience fired with imagination and optimism. And he did not even have to push a button for that!