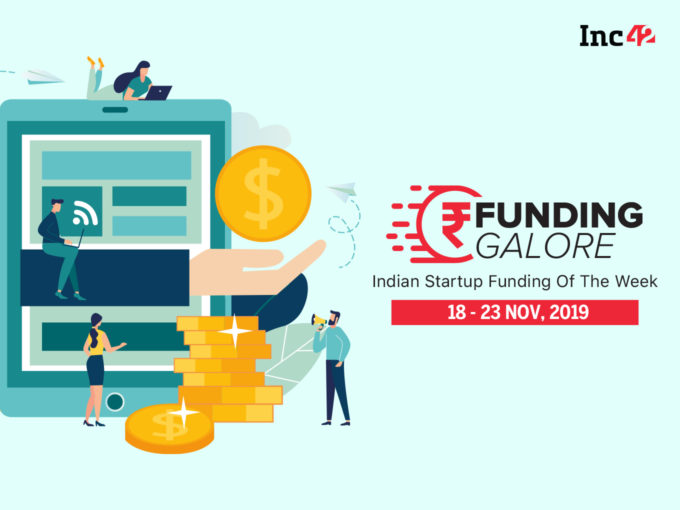 In one of the biggest funding round this week, Bengaluru-based fintech firm Perfios has raised $50 Mn in Series B funding round led by Warburg Pincus and its existing investor Bessemer Venture Partners.

The recent funding of Perfios has also given an exit to a few of its angel investors from the fintech company. The company plans to utilise the funds in its three core areas — continued technology innovation, developing new offerings, and international expansion.

Overall, this week 19 startups raised around $122.56 Mn funding totally and one startup acquisitions took place in the Indian startup ecosystem. (This funding report is based on startups that disclosed funding amount).

Gurugram-based food and beverage maker Wingreens has raised $17 Mn (INR 125 Cr) in Series B from venture capital firms Sequoia Capital and responsAbility to expand its presence to general retail stores. With the funds, the company plans to expand its distribution, with a special focus on general trade to scale up revenue and sales.

Delhi-NCR headquartered coworking space provider, myHQ has raised $1.5 Mn in Pre-Series A funding round led by India Quotient, Singapore-based family office RB Investments, Ashish Goenka from Suashish, angels from the online platform LetsVenture and existing investors including Anupam Mittal and Nitish Mittersian also invested in the round. myHQ plans to utilise the funds to expand its operations.

Bengaluru-based non-profit organisation, GiveIndia has received a combined grant of INR 23.4 Cr ($3.26 Mn) from A.T.E. Chandra Foundation, Bill and Melinda Gates Foundation, Omidyar Network India and philanthropist Vikrant Bhargava, towards its mission of scaling up every day giving in India. With the new funds, the nonprofit organisation plans to scale up its donor base from 1.7 Lakhs to 20 Lakhs over the next five years.

Mumbai-based Furtados School of Music (FSM) has raised a fund worth INR 20 Cr ($2.8 Mn) from IAN Fund and DSG Consumer Partners. The company has said that it will be utilising the funds for expanding its presence across major cities in the country, enhance its service offerings, and scale its technology infrastructure (app and online platforms).

Gurugram-headquartered customer engagement and rewards platform EasyRewardz has raised an undisclosed amount of Series B funding from Walmart-owned ecommerce player Flipkart. The company said that the fresh funds will be used to drive new product development and accelerate global expansion.

Delhi NCR-based Digital Mall of Asia (DMA), a virtual ecommerce platform, has raised INR 22 Cr ($3.1 Mn) in a funding round led by real estate investor Satish Jain through his privately held infrastructure development company Amour Infrastructure. The company plans to utilise the funds to scale up product development and branding, to create awareness about its key offerings and how it’s differentiated from traditional ecommerce models.

Bengaluru-based fintech startup Kaarva has raised undisclosed seed funds from angels such as InMobi founders Naveen Tewari and Piyush Shah; Yulu CEO Amit Gupta, Vokal founders Aprameya Ramakrishnan and Mayank Bidawatka, NuWare founder Venk Krishnan, Melissa Frakman of Emphasis Ventures (EMVC), Citrus Pay’s Satyen Kothari, Bhagchandka Family Office Fund and Gemba Capital among others. The company said it used the funds to build its product and is now taking it to market as it looks to increase the reach among the addressable base.

Bengaluru-based edtech startup, Multibhashi, has raised an undisclosed amount of funding from RareJob and other investors. This is the first time that a Japan-based English tutorial company has made such an investment in an Indian edtech startup. Multibhashi plans to utilise the funds towards the development of technology, enhancement of product, hiring of team and acquisition of new users in the country.

Yuvraj Singh-backed Healthtech startup Healthians has raised INR 85 Cr ($12 Mn) in Series B round led by Japan-based DG Incubation and DG Daiwa Ventures. Other investors included Kotak PE, Trifecta, Tokio Marine and Singapore-based fund Mistletoe. Healthians is planning to use the funds to expand its geographical presence and penetrate deeper into the cities it already operates in. In addition, it plans to enhance its technological capabilities and introduce new products for the users.

Mumbai-based B2B healthtech marketplace Medikabazaar has raised INR 112 Cr ($15 Mn) as part of Series B round led by HealthQuad, Ackermans & van Haaren, Rebright Partners and Toppan Printing company. Medikabazaar plans to use this funding to enhance its technological abilities, supply chain infrastructure and expanding its team.

Hyderabad-based B2B Enterprise FoodTech Marketplace, Food n i, has raised an undisclosed seed round from a group of HNIs and angels like founder and CEO of Go North Ventures, Sanjay Jesrani, CEO Acko, Varun Dua, Premanshu Singh, CEO Coverfox, among others.

Gurugram-based tech startup, Do Your Thng, has raised $150K ($0.2 Mn) from angel investors including Puneet Chandra, founder and joint managing director at Skootr Global Private Limited, Sorabh Agarwal, ex-MD – Copal Partners, among others. The raised amount will be utilized for expanding the team, getting more creators on-board and do tie-ups with brands and other organisations to increase their revenues.

Mumbai-based consumer healthcare brand OneLife has raised pre-Series A funding of INR 5 Cr ($0.7 Mn) from a group of HNIs from pharma, healthcare and chemicals industry. The funds raised will help the company to strengthen its product range, expand geographies, increase online and offline presence, invest in marketing and brand building, and hire talent.