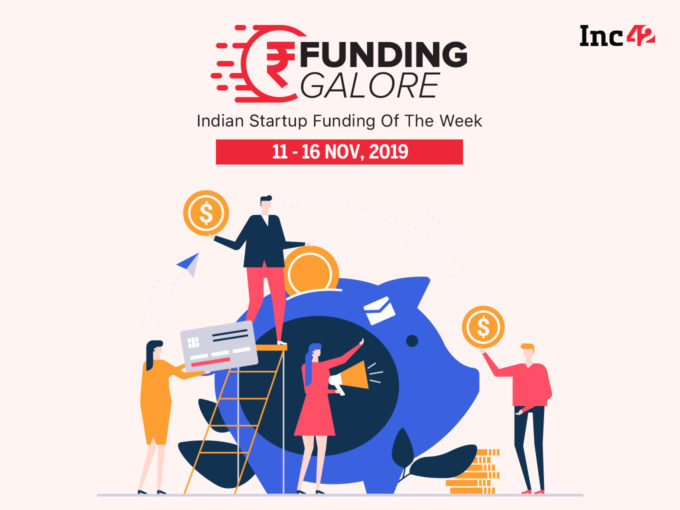 In one of the biggest funding news this week, Chennai-based software-as-a-service (SaaS) unicorn Freshworks has confirmed that it has signed an agreement for a $150 Mn Series H round led by Sequoia Capital, CapitalG, and the company’s first investor Accel. With this investment, the company’s valuation has reached $3.5 Bn.

Further, Chinese multinational conglomerate Tencent Holdings acquired 10% minority stake in Indian insurance aggregator PolicyBazaar, which has now been valued at $1.5 Bn. The deal was signed last week. Founded in 2008 by Alok Bansal, Avaneesh Nirjar and Yashish Dahiya, PolicyBazaar Group has two entities: PolicyBazaar and PaisaBazaar. The company was founded in 2008 as a web aggregator and comparison website for insurance products.

Overall, this week 16 startups raised around $33.12 Mn funding totally and one startup acquisitions took place in the Indian startup ecosystem. (This funding report is based on startups that disclosed funding amount).

Mumbai-headquartered beverage startup Coolberg has raised $3.5 Mn in its Series A funding round from Singapore-based RB Investments, existing investor India Quotient. Other investors include Ashish Goenka, chairman of Suashish Diamonds and a pool of investors from Indian Angel Network (IAN). The company said that it will use the funds to help the company to strengthen its distribution network and increase brand awareness.

Bangalore-based online grocery delivery startup Ninjacart has issued 300 debentures to Indian venture debt fund, Trifecta Capital for INR 30 Cr ($4.2 Mn) in its new funding round, according to a regulatory filing published on October 24, 2019. The company also undertook a buyback of all vested shares of employees who chose to sell their ESOPs.

Gurugram-based electric two-wheeler startup, Zypp, previously known as Mobycy, has raised INR 15 Cr ($2.1 Mn) in Pre-Series A from the Indian Angel Network (IAN) to scale up its fleet to include over 5K e-scooters. Besides the capital, IAN has also mentored the early-stage startup to take its business forward. The startup is also planning to scale up its operations across five Indian cities, including Delhi-NCR, which has recently changed its policies to approve bike-taxis. The company targets to expand its fleet to include around 20K e-scooters by the end of 2020.

Hyderabad-headquartered healthtech startup ekincare has raised $3.6 Mn in Series A funding round. The company said that undisclosed new investors with participation from existing investors including Eight Roads, Touchstone Equities and Ventureast, invested in this round. The company plans to use the fresh funds towards marketing and sales efforts as the company has mostly grown through word of mouth references until now.

Bengaluru-based commerce platform Niki (earlier Niki.ai) has raised an undisclosed amount of fresh funding from US-based fintech-specialist fund EMVC along with its existing investors. Founded in 2015 by Shishir Modi, Sachin Jaiswal, Keshav Prawasi, and Nitin Babel, Niki is a B2C commerce app used across Tier 2, 3 and 4 towns of India, to transact online by assisting them in every step with assurance through a conversational agent in ones’ language.

Singapore and Pune-based SuperGaming has raised $1.3 Mn funding round from Japanese investors Dream Incubator and Akatsuki Entertainment Technology (AET) Fund, and Better Capital, an early-stage investor. Yet to introduce its product in the market, SuperGaming is planning to launch its gaming platform with the new funds. It is also looking to partner with popular game developers and publishers as well as expand its team.

Gurugram-based men’s health and wellness startup, misters.in, has raised INR 3.5 Cr ($0.49 Mn) as a part of its series B round of funding led by Sauce.VC, Rainforest Ventures Pvt Ltd and other angel investors. The company plans to utilise the raised capital to establish its strong footprint in the men’s health and wellness space, with a focus on high-quality products, science, and sensitivity.

Bhiwandi-based AutoNxt Automation Pvt. Ltd has raised an undisclosed amount of funding from Sun Mobility’s Chetan Maini and Sandeep Maini in the ongoing funding round of the startup. Kaustubh Dhonde, founder and CEO of AutoNxt said that the fresh funds will be used to help the company prepare itself for market launch, which will include getting required certifications.

Gurugram-based SasS provider, Bookingjini has raised INR 3 Cr ($0.42 Mn) in seed funding from Mumbai Angels Network, and other angel investors. Founded in 2017 by Sibasish Mishra, the startup leverages automation technology to help hotels get direct bookings on their website.

Delhi-based video commerce platform, SimSim, has raised INR 43.49 Cr ($6 Mn) in a Series A funding round jointly led by Accel India and China-based Shunwei Capital. In this funding round, Accel and Shunwei invested INR 17.91 Cr ($2.5 Mn) each in SimSim, with both taking a 12.5% stake in the company.

Mumbai-based personal styling platform, StyleCracker has raised $2 Mn from US-based investor AMJ Ventures. The startup has been backed by Bollywood actor Alia Bhatt. With the new funds, the company plans to increase its presence in the country, build out capabilities in machine learning and strengthen its position in the personalisation fashion market.

Homegrown quick-service restaurant chain, Burger Singh, has raised an undisclosed amount of investments in a funding round led by Singapore-based venture capital firm RB Investments, and other angel investors. With the funds, the company plans to open about three new restaurants every month for the next 6-8 months.

Gurgaon based digital logistics platform Shipsy has raised an undisclosed amount of fund in its pre-Series A round led by Info Edge India Ltd. Founded in June 2015 by IIT alumnus Soham Chokshi and Dhruv Agarwal, initially focused on courier and LTL logistics. The startup claims that it has now diversified and expanded its services to broader logistics ecosystem.

Other Developments Of This Week