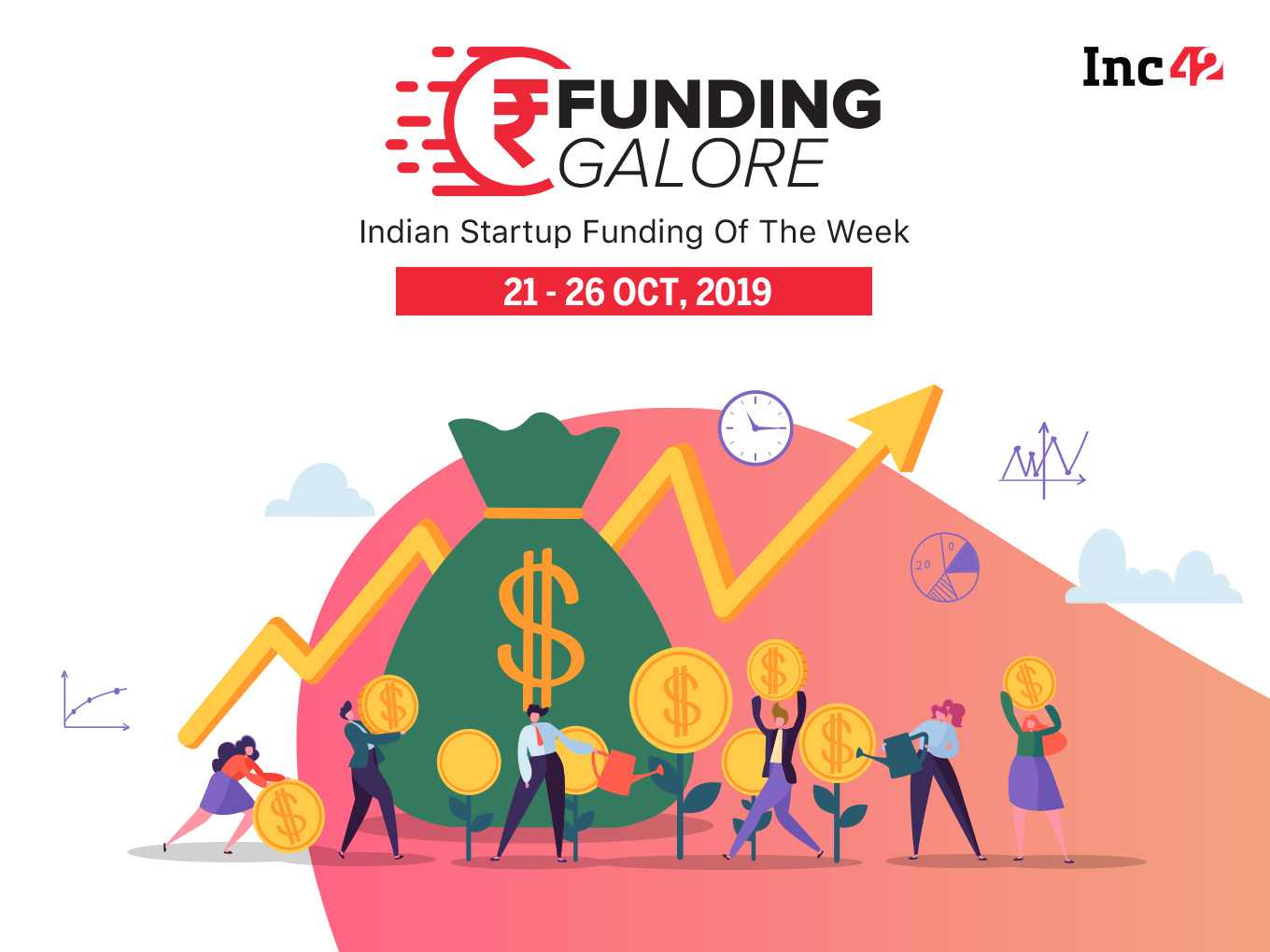 Apart from this, 17 startups raised around $31.26 Mn funding and one startup acquisition took place in the Indian startup ecosystem. (This funding report is based on startups that disclosed funding amount.)

Mobikon: Singapore-based Mobikon, AI-driven consumer engagement and predictive analytics SaaS platform raised a Series B round of $12.5 Mn led by former chairman and CEO of ‎Flipkart and an angel investor, Binny Bansal. Mobikon is said to utilise these funds to enhance its tech platform and further expand into other geographies. This is the first time Bansal has made an investment in a growth-stage startup focussed on the Southeast Asia market.

Log9Materials: Bengaluru-based cleantech startup Log 9 Materials raised $3.5 Mn (INR 25.22 Cr) funding in Series A round led by Exfinity Venture Partners and Sequoia Capital India’s accelerator programme Surge. The startup will be using this funding for product development, and commercial and industrial deployment of aluminium fuel cell, which the company has been working on since last year.

Instacar: Outstation cab aggregator InstaCar raised an undisclosed amount of funding from Techstars Cofounder David Cohen, who had previously invested in the US-based ride-hailing service Uber. Previously InstaCar had raised $1 Mn in seed funding from Hong Kong-based Swastika Co Ltd, within a year of its launch in 2016. Back then, the company had also claimed to have on-boarded 500 taxis in Madhya Pradesh, within two months of its launch.

NutriMoo: Gurugram-based dairy and whole-food brand NutriMoo received $1 Mn in an equity funding round from IndoCan Honey Pvt ltd. With the investments, the startup has set up plans to market its products through its distribution network comprising of an in-house dedicated team, distributors, and agents along with supermarts and large grocery formats.

Loca: Bengaluru-based shared last-mile connectivity provider Loca raised an undisclosed amount of funding in its first round of investment led by Stellaris Venture Partners, China-based Fosun RZ Capital and a group of individuals including Aprameya Radhakrishna, cofounder of Taxiforsure, Mayank Bidawatka, cofounder of Vokal and Rohit MA cofounder of Cloud Nine. Loca plans to invest the funds to expand its presence to all major metro stations in Bengaluru. Additionally, it wants to build its tech and operations teams and has plans to expand its operation to new cities. The startup is also targeting to operate in New Delhi by early next year.

Wealthy: Wealth management startup Wealthy raised $1.3 Mn fund in a round led by early-stage venture capital firm Good Capital. Fintech venture capital firm Emphasis Ventures (EMVC) also participated in the round. It is expected to use the funds to scale up its partnerships with wealth managers to tackle trust issues among customers and further develop its financial products.

Crediwatch: Bengaluru-based fintech startup Crediwatch raised $3.2 Mn in a Series A funding round, led by Artis Ventures and with participation from Abstract Ventures. The funds will be used to improve and scale up their models for a dynamic ‘Trust Score’ credit scoring model for businesses, especially for SMEs.

Stage3: Fashion rental and styling platform Stage3 raised $2 Mn in a Pre-Series A funding round led by Blume Ventures. The fresh capital will be used to amplify the brand experience. It would also boost its offline footprint for the omnichannel play, augment its data capabilities presumably for procurement and designs, while solidifying Stage3 as the pre-eminent platform for design-led fashion at affordable prices.

The Man Company: Bollywood actor Ayushmann Khurrana invested an undisclosed amount in Gurugram-based male grooming startup The Man Company (TMC). The funding is part of a strategic investment in the company, and the actor would not hold any board position. The funds will be used for branding and ramping up presence across India.

Credenc: Delhi-based startup Credenc raised $2.5 Mn in seed funding from Omidyar Network India. Investors such as EMVC, Better Capital, and Indian Institute of Management -Kozhikode (IIMK) Alumni Fund also participated in the funding round. Credenc is a tech-based education loans platform and it works as the digital finance desk of more than 200 management colleges across 17 Indian cities.

Pumpkart: Dr. Dinesh Dua, North India Chairman for Startups and Entrepreneurship for CII made an angel investment in Pumpkart, an online B2B platform which works on Brand to retailer model. Founded in 2014 by Mr. KS Bhatia, the startup which began as B2C company selling Pumps online pivoted earlier this year into a B2B platform.

eBikeGo: Amritsar-based electric two wheeler rental platform, eBikeGo raised an undisclosed amount as part of its recent funding round led by Startup Buddy. The round also saw participation from other investors like Singer Sukhbir Singh, Rajesh Sawhney (Co-Founder of Innerchef), Rohit Chanana (Founder, Sarcha Advisory), Siddartha Ahluwalia (Founder of 100x Entrepreneur), Milind Garud, Arun Gholap, Shantanu Vinekar and other senior corporate executives. It is now expanding to four other cities with the increasing demand and also increasing their fleet in cities they are already in. They are also working to expand the service network in different parts of the city to provide a solution for the customers and business partners using the two wheelers.

CashSuvidha: fintech startup Cash Suvidha raised $4 Mn in debt in the second quarter of FY2019-20. The funds were raised through different Financial Institutions.  The debt will be used to increase the loan books of the company.

Styched: Bengaluru-based fast-fashion ecommerce venture raises seed funding from marque angel investors. The team is led by Soumajit Bhowmik, the ex-head of ecommerce at Capillary technologies. Styched said the round is raised to hire more people, invest on marketing, and open its first overseas office with an aim to become a global fast fashion online brand.

MiStay: Bengaluru-based hourly hotel booking company, MiStay raised an undisclosed amount of investment from ah! Ventures and other investors in a funding round, led by Hyderabad-based ex-entrepreneur Sumit Nagpal. The company is said to utilise the fund to grow the leadership team and build up the brand.