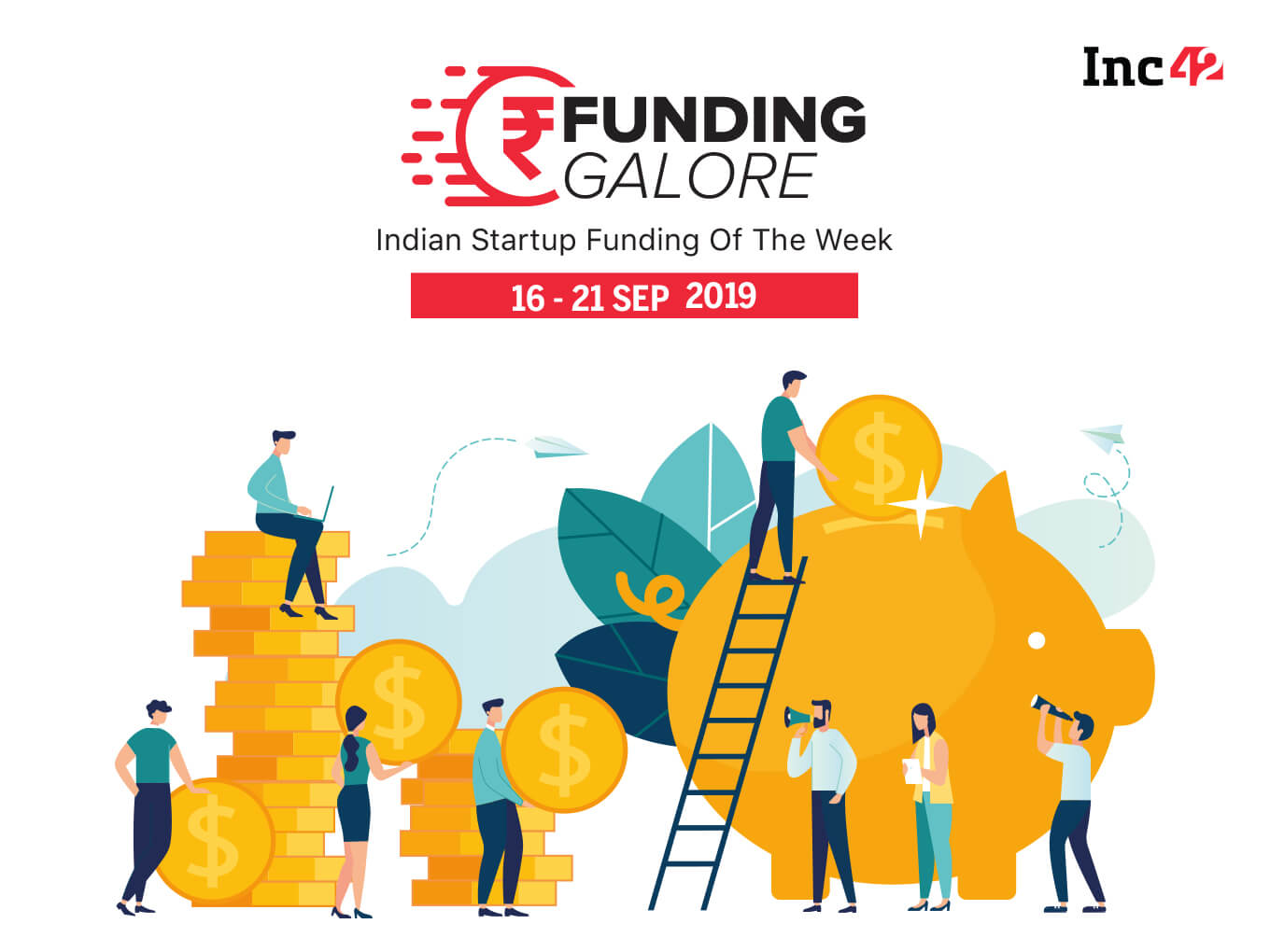 In one of the biggest Indian startup funding developments, Noida-headquartered digital payments giant Paytm announced its commitment to invest INR 250 Cr ($35 Mn) in Paytm Travel over the next six months. The funds will help the company in towards scaling up the product and technology team, set up new business verticals and grow the market share in existing travel verticals.

Another big round of funding was raised by digital stockbroking firm Upstox. The startup raised $25 Mn in its second round of investment from New York-based investor Tiger Global. Upstox cofounder Ravi Kumar claimed the company has been profitable for two years and a fresh round of funding will be used to expand its business, making product improvements and adding new features, as well as hiring.

Generico: Pharmacy chain Generico has secured an $11 Mn of funding from Lightbox Ventures, today, as a part of their series A funding. The pharmacy chain plans to utilise this funding to strengthen its supply chain, technology and healthcare prepositions. It will also be expanding to 150 stores in Mumbai and other cities such as Pune.

SpaceJoy: United States and Bengaluru-based home decor startup Spacejoy raised $1 Mn seed round from Accel Partners. The company will use this funding to grow its services and reach in the global market.

Square Yards: Proptech company Square Yards raised $20 Mn equity funding round from a clutch of investors including Bennett Coleman & Co Limited (BCCL), Genkai Capital, founders of PropertyGuru Steve Melhuish and Jani Rautiainen, Koh Boon Hwee, former chairman of Singtel and DBS along with the participation of some existing investors. In addition to this, Square Yards has also raised around $25 Mn in debt financing. Square Yards estimates its valuation to be in the range of $260 Mn to $300 Mn. Going forward, the company wants to aggressively ramp up its investments in strengthening its technology infrastructure, building a go-to consumer brand, as well as expanding to newer geographies in emerging countries especially those that have a large primary residential market and fragmented distribution.

Groww: Bengaluru-based wealth management platform Groww raised $21.3 Mn in Series B funding round led by fintech-focussed investment firm Ribbit Capital. In addition, the capital will enable the startup to strengthen its team to build exciting products for its users.

Kaarya Naturals: Paytm’s Vijay Shekhar Sharma supported investment firm Roots Ventures invested an undisclosed amount in health food company Kaarya Naturals, which goes by the brand name eighty20. The company has a range of protein and health bars and is now planning to expand its range of healthy snacks with this new funding.

PlusPin: Hyderabad-based healthtech startup PlusPin raised INR 5.25 Cr ($733.68K) in a fresh funding round led by Indian Angel Network (IAN). Sanjay Jesrani, Dr Vinay Tulla, Dr Kiran Peddi, and Rajan Anandan, among others IAN angels participated in the funding round. PlusPin’s existing angels including Ambicare Clinics, participated as co-investors. Munjal Group, Axilor Ventures, among others also joined in as the new investors. The funds will be used to scale to key target cities, strengthen its technology infrastructure, and augmenting customer engagement and experience.

NestAway: Bengaluru-based home rental startup NestAway raised INR 34.92 Cr ($5 Mn) from existing investor Goldman Sachs. The company claims to be clocking over $2 Mn in revenue every month. The company plans to enter the women’s housing and senior living management over the next 12 months.

Syntizen: Hyderabad-based digital identity solutions provider Syntizen raised an undisclosed amount of Pre-Series A funding from global payments technology company Mastercard and biometric solutions provider ACPL. The company plans to use the funds to strengthen its product offerings and expand its services in India and internationally.

Hello World: Home rental startup Nestaway invested $10 Mn towards its co-living and student living entity, Hello World. In the next two-three months, the company says it would be looking to expand its capacity to over 50K beds in nine more cities across India — Indore, Manipal, Chandigarh, Vizag, Lucknow, Ahmedabad, Cochin, Goa, and Vellore.

GigIndia: Freelance marketplace GigIndia raised a strategic round of funding from a clutch of technology veterans including S Ramadorai, former Tata Consultancy Services CEO; Kiran Deshpande, former CEO of Tech Mahindra; Ravi Nigam, ex MD and cofounder of Tasty Bite Eatables; and Shashank Deshpande, cofounder of Clarice Technologies. Going forward, the company is now keeping a laser-sharp focus on business growth for the next six to nine months before raising a bigger round.

Blowhorn: Bengaluru-based logistics startup Blowhorn announced a new round with the undisclosed amount of funding from a clutch of investors. The company didn’t disclose the lead investor but said that other participating investors include Venture Catalysts, James Lee Sorenson and Japanese VC firm, Dream Incubator. The company plans to use the funds towards bolstering innovation and expansion.

Zivame: Bengaluru-based online lingerie retailer Zivame raised equity funding from existing investors Zodius Capital and Avendus Capital. The company had said that aligning with its growth strategy, Zivame plans to raise a larger round later in 2019.

Meddo: Gurugram-based healthtech startup Meddo raised $3 Mn in Pre-Series A funding round led by SRI Capital. Other entities like growX Ventures, LetsVenture, Jitendra Gupta (cofounder Citrus Pay) and Venture Gurukool also participated in the round. The funding will be invested to increase the team size, and build on the technology backend.

Cred: Kunal Shah’s credit card rewards app Cred raised $9.5 Mn (INR 68.87 Cr) in Series B funding round from US-based venture capital fund General Catalyst. The company said in its filings earlier that the bridge Series B funds will be used for growth, expansion, marketing and general corporate activities of the company.

BYJU’S: Bengaluru-based edtech company BYJU’S issued fresh set of warrants to Bennett, Coleman and Co. Ltd (BCCL) worth INR 3.9 Cr.  In an extraordinary meeting on August 30, BYJU’S passed a resolution to offer and issue five warrants at a consideration of INR 78 Lakh each to BCCL. Prior to this, Times Group held 5 equity shares and 5 warrants and post-investment, it will hold 5 equity shares and 10 warrants.

iKure: Kolkata based iKure Techsoft Pvt. Ltd. raised an undisclosed amount of funding from Inflection Point Ventures (IPV). iKure is a social health enterprise that is engaged in delivering primary healthcare, wellness and prevention services to rural, semi-urban and urban population through its hubs and spokes clinic model. The startup plans to utilise the acquired funds for business and technology expansion.

SlicePay: Fintech startup SlicePay raised INR 20.5 Cr ($2.8 Mn) debt funding from Japan-based Gunosy Capital and investment arms of Das Capital, Pegasus Wings Group. SlicePay founder Rajan Bajaj told Inc42, “We are touching 15K transactions a day and a waiting list of more than 300K customers. To keep up with the pace, fundraising is a constant for us and we keep meeting the best investors in the world.”