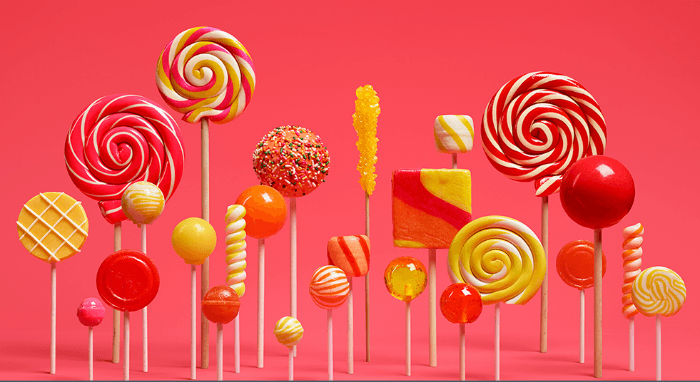 Finally Google has announced what its Android L will be called. Yes it’s time to say hello to Android Lollipop.

Lollipop as said by Google is the most ambitious release on Android with over 5,000 new APIs for developers. Lollipop is designed to be flexible, to work on all devices and to be customized for the users the way they see fit.

Lollipop is the 13th major release of Android. The platform has a new, more fluid animations, a cleaner design with a bolder color palette, a revamped multitasking menu, and also offers new ways to interact with voice.

The new Android comes along with a “material design” user interface which caries a common look across devices such as cars, TVs and watches, along with the core Android market — phones and tablets.

“As you switch from one screen to another, the experience should feel the same. So Lollipop has a consistent design across devices—an approach we call Material Design. Now content responds to your touch, or even your voice, in more intuitive ways, and transitions between tasks are more fluid”

One can adjust settings so that only certain people and notifications can get through, for example, when you’re out to dinner or in the middle of an important meeting. And when an important notification does come through, you can see it directly from the lockscreen.

There’s a new battery saver feature that extends the life of device by up to 90 minutes.

Another interesting feature is that now Google has enabled multiple user accounts and guest user mode on the phones so as to keep personal stuff private for a user. Users can even secure device with a PIN, password, pattern, or even by pairing your phone to a trusted device like your watch or car with Smart Lock.

With the new Lollipop Google is also supporting a “kill switch” feature so as to make stolen phones unusable through what it is calling “Factory Reset Protection” as it requires a password before a phone can be reset.

Google has also announced three launch devices for Lollipop — the Nexus 6 phone, made by Motorola, the HTC Nexus 9 tablet and the ASUS-manufactured Nexus Player set-top box.

Android Lollipop will be made available for download to Nexus 5 phones and Nexus 7 tablets on Friday on the Android developers website. It will come pre-installed on the forthcoming Nexus 6 and Nexus 9 devices. Whereas, other manufacturers and networks will have to test the software before they release it alongside updates of their own software for their machines.