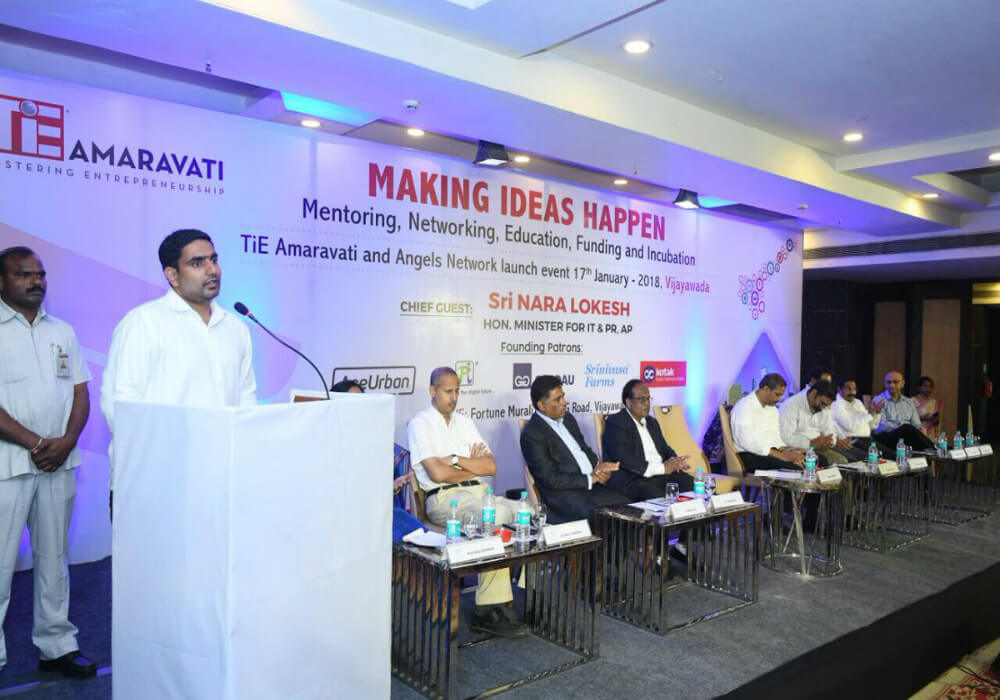 The Minister for IT&C, Govt of AP Nara Lokesh has formally launched TiE Amaravati Chapter and Andhra Angels in Vijayawada to kickstart the startup ecosystem in Andhra Pradesh, which had weakened after Hyderabad’s separation from the state.

Launched TiE Amaravati and Angels Network – AP Chapter today in Vijayawada. This will help build an ecosystem for Startups to launch and scale faster. pic.twitter.com/HUNFXOAPt7

Andhra Angels is expected to invest over $15.38 Mn (INR100 Cr) in startups over the next few years.

In 2014, Hyderabad, home to hundreds of startups in the country, had gone to the newest recognised state Telangana, earlier a Northwestern part of Andhra Pradesh. Amaravati is now the capital of Andhra Pradesh.

TiE, a Valley-based organisation to encourage entrepreneurs, has now 61 Chapters across 18 countries in the world. In India, among some of the other TiE Chapters are Bengaluru, Hyderabad, Mumbai, Delhi, Coimbatore, Pune and Ahmedabad.

Initially, TiE Amaravati will enrol about 30 to 35 charter members including several hundred Associate and Student Members in the first operational year and hopes to grow its strength gradually, says the official statement.

J A Chowdary, Special Chief Secretary and IT Advisor to CM, Andhra Pradesh said, ” To build a strong startups ecosystem in the new state besides the local entrepreneurs we need to attract the best minds from across the globe.”

Chowdary also spoke about the 5M strategy (Manpower, Money, Meetup Events, Money and Market Access) the government of Andhra Pradesh will focus on to create a vibrant entrepreneurship ecosystem in the state.

Sateesh Andra, President TiE Amaravati said “As per the 2017 edition of the NASSCOM-Zinnov report, India ranks third among global Start-up ecosystems with more than 5000 startups with 1000+ new additions in 2017. One of the key developments in India’s startup market over the past decade has been the development of large, robust Angel Investor ecosystems.”

“To enable State of Andhra Pradesh to lead collective dream of a new India and for the development of innovation, entrepreneurship and startup culture, we strongly felt the need to establish TiE Chapter as well as an Angel Network,” added Sateesh.

TiE Amravati’s immediate focus will be fintech, IT/ITES, pharma/life sciences, manufacturing, agriculture and food processing sectors. TiE Amaravati will also work closely with educational institutions to introduce entrepreneurship based courses in the curriculum, assist in setting up E-cells and incubators to inculcate the entrepreneurial aspirations in young minds.

TiE Amaravati Chapter aims to provide a catalytic environment to local women entrepreneurs in the state of Andhra Pradesh by focusing on giving a strong platform for networking, knowledge sharing and mentoring to women entrepreneurs.