From $500 Mn Loan Requests To Paid Feature Requests To Why Tesla Is Getting Delayed, Paytm Boss Vijay Shekhar Sharma Gets The Weirdest Messages! 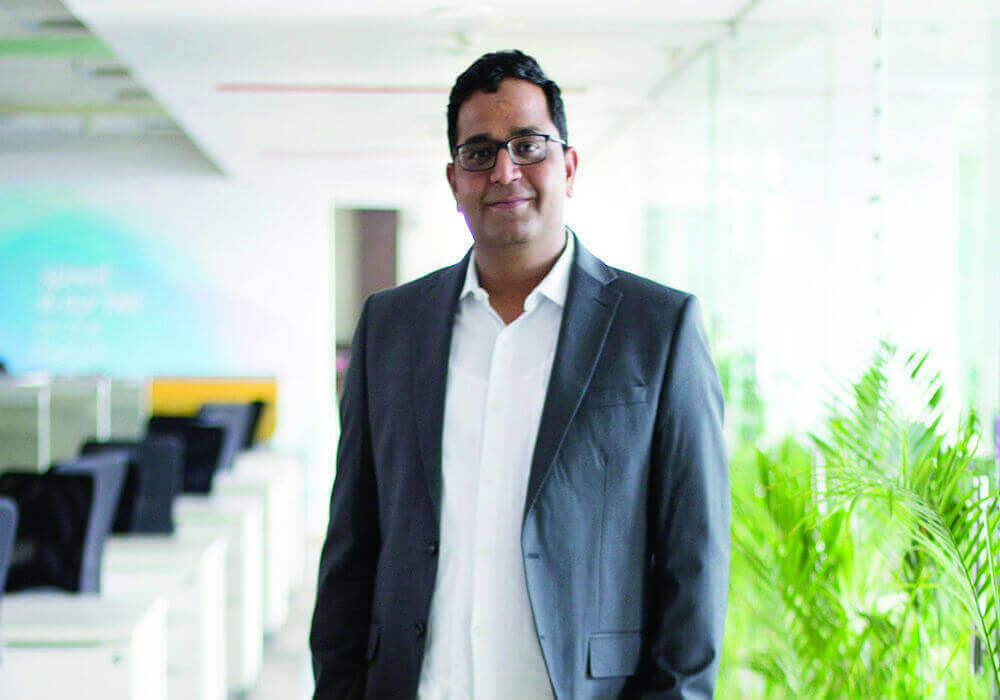 When it comes to weird emails (spam filters don’t seem to be of much use), most of us receive more than our fair share. Why, only this morning, I checked my inbox and found emails offering me an unsolicited “approved personal bank loan of INR 80 Lakh”; a free iPhone/Mac/high-end refrigerator/65-inch LED TV if I used my mobile wallet to buy goods worth INR 5,000; “80% recovery of lost hair” (from a hair loss clinic); and even an email asking me if I was I and that the sender, some Sarah Jacobs, needed to talk to me urgently.

But while most of us “aam” (common) people usually receive spam and promotional emails (with the odd request on WhatsApp or FB Messenger to connect someone with someone or refer someone for a job vacancy) things can get really weird for the who’s who of the world.

Public personalities are subjected to much more than promotions and spam. It doesn’t even stop at abuses and fangirls/fanboys. You have to deal with weird messages and emails demanding loans of billions of dollars and even Twitter access.

As we discovered when we went stalking on Paytm Boss Vijay Shekhar Sharma (VSS)’s social media accounts. (Honestly, it wasn’t all that difficult, Sharma has been sharing the weird emails and messages he gets on his Twitter handle).

Let’s start with our favourite emails/message revelations Vijay Shekhar Sharma did on Twitter: 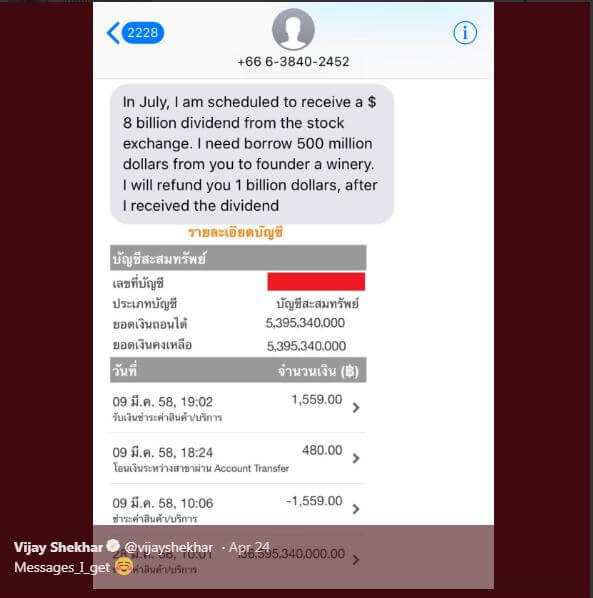 Of course, this led to some interesting replies and also pointed out what we might have missed. 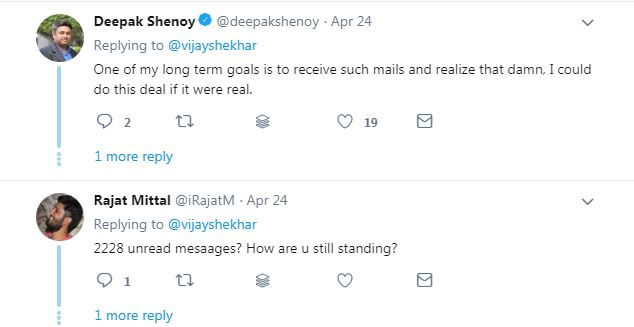 Looks like even requests for money to others can remind one of one’s goals!

Next, we have some sort of phishing attempt that seems to have failed miserably. 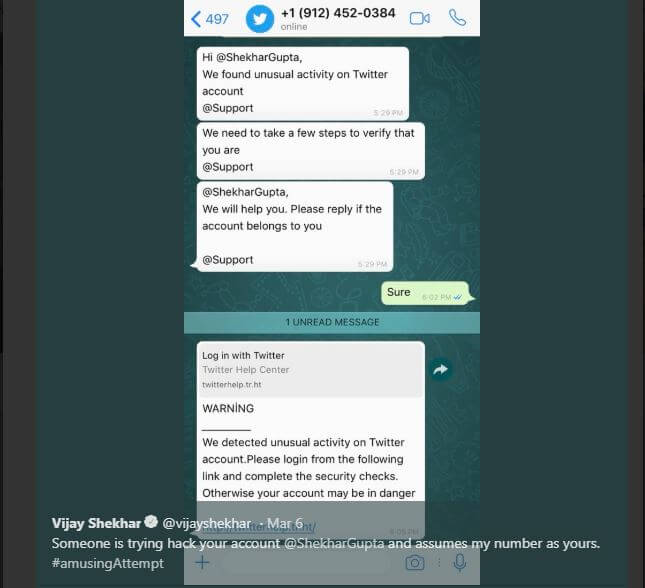 His tweet led to some even more amusing replies from Twitterati!

One of Sharma’s “loyal customers” of Paytm too asked Vijay Shekhar Sharma for a loan. At least he didn’t ask for $500 Mn, neither did he offer the double in return! 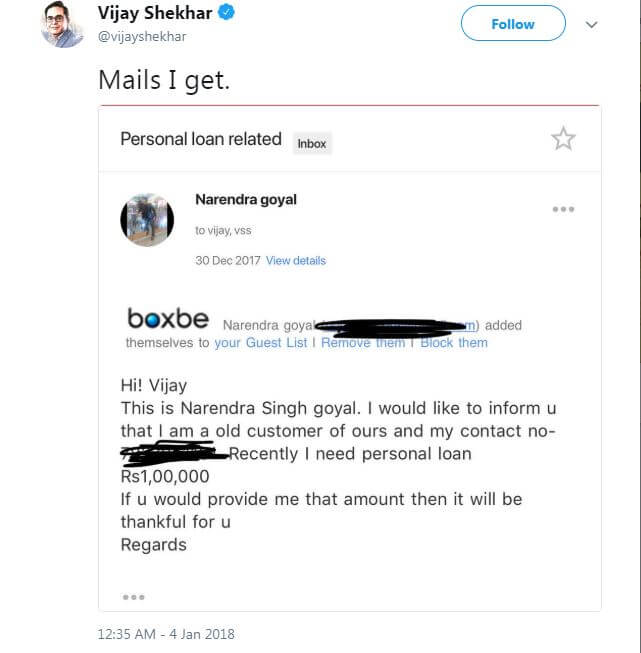 Looks like Paytm’s Vijay Shekhar Sharma isn’t the only getting such requests. And his tweet triggered some others to share the mails they get. Poor Ajay Singh below received a request for project funding in his ‘matra bhasha’ (mother tongue).

To decipher ‘About cheraty’s’ cryptic email to Rahul Verma, we need to unlearn and learn English spellings all over again. We feel the “struugller actor from kabul” would do exceptionally well in spelling bee! It made us go “crazzy”! 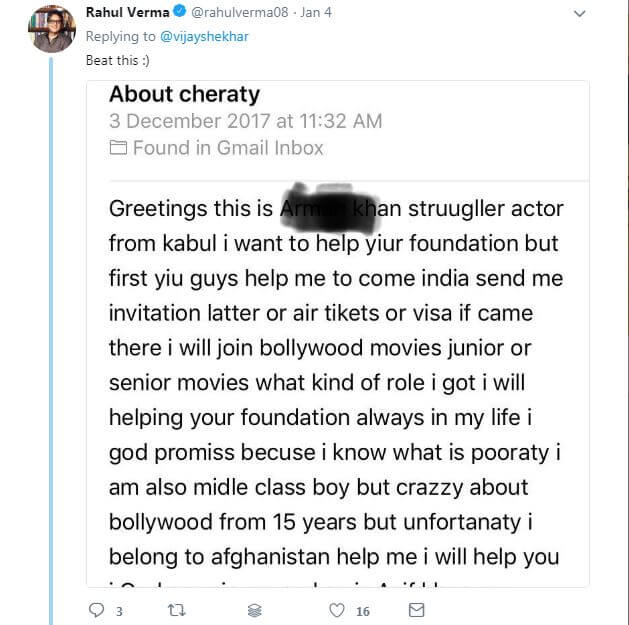 We dug a bit deeper and found a tweet by Sharma on a “by-invitation only arranged meeting” in Zurich and Davos. Sharma received this directly in his mailbox. #Visionary! 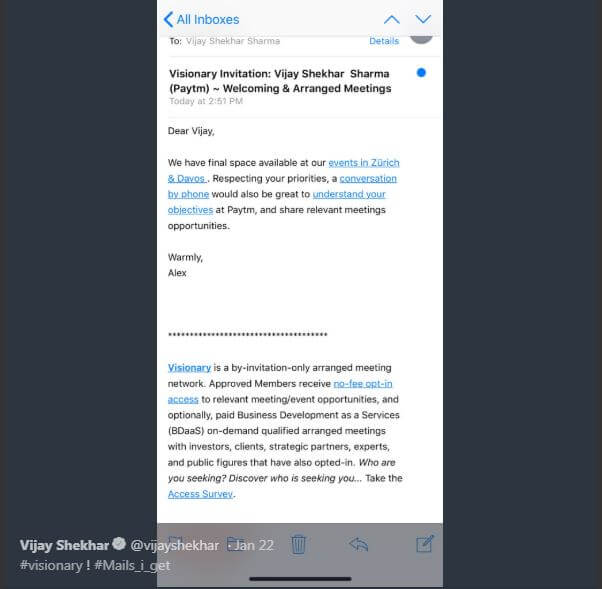 Badass Twitterati had a lot to say about this too.

We also found out the reason why Tesla is getting delayed! 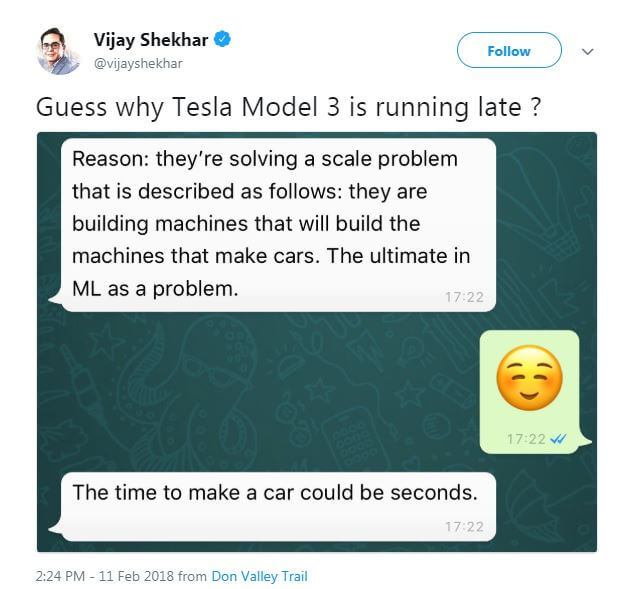 If you think this is absurd, check out the replies: 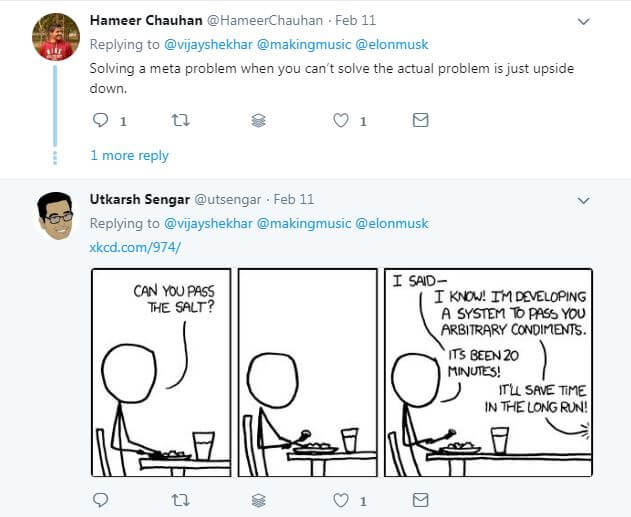 And finally, we found a way to get a two-page feature in a magazine which we can show off forever. The writer promises this is the “best opportunity to feature your profile in front of global audience”. Heck, he even offers “permanent visibility” on his website and a “certificate of listing”. And all for INR 30k. Good deal this! 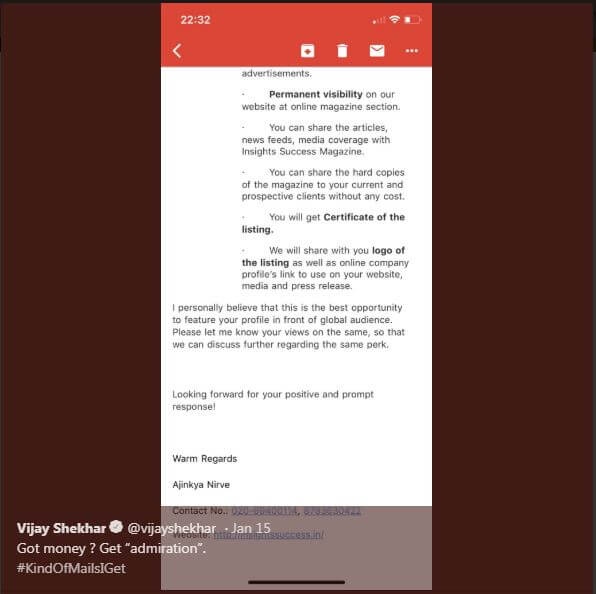 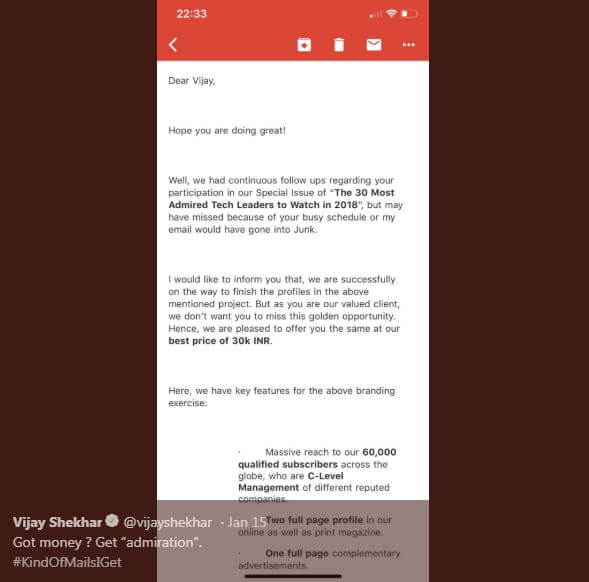 As expected Sharma’s followers had a good laugh: