From Being Spurned For A Loan To Creating A Unicorn: The Girish Mathrubootham Story

From Being Spurned For A Loan To Creating A Unicorn: The Girish Mathrubootham Story

With IPO plans for next year, Freshworks has raised nearly $400 Mn from investors

Mathrubootham relived his journey from school to the boardroom at SaaSBooMi 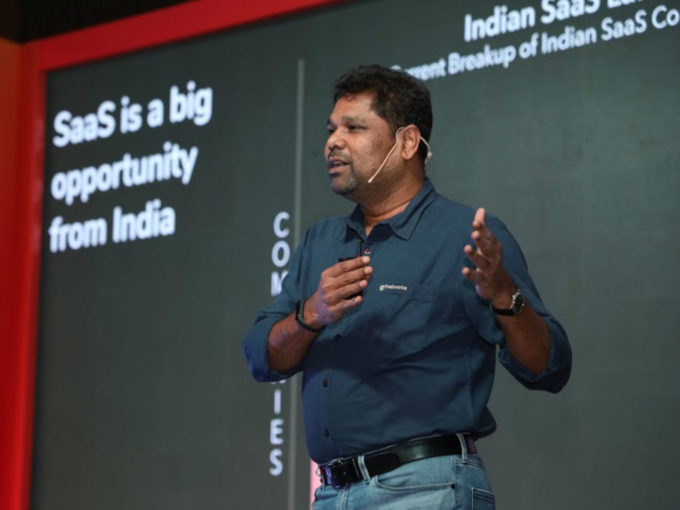 “I had to do B.Sc Chemistry since I didn’t get a merit seat in engineering. My father wanted to get me a seat in Shanmuga engineering college for BE, electrical and electronics. But he was a special officer at Bank of India so he didn’t have money to pay management fees, which was INR 75,000 at the time (1992). So he had to take a loan from relatives,” Freshworks CEO Girish Mathrubootham recalls.

Enthralling an audience of over 500 SaaS entrepreneurs, investors, journalists at the recently-concluded SaasBooMi, the Freshworks CEO touched hearts with the story about his father seeking a loan from relatives for him Girish. The story had already touched hearts, but it was an especially emotional moment for the entrepreneur as his father had passed away a few days ago.

“I have been fortunate enough to experience the joy of dreams coming true.”

Mathrubootham is nothing short of an icon in the SaaS world and that’s because his journey has been such. After starting up unsuccessfully multiple times, he began working at Zoho. That’s when he was inspired to create a new startup with a new helpdesk product in 2010. The perseverance led to success around the globe.

Talking about his “you can do it” mindset, Girish Mathrubootham told the young entrepreneurs in the audience that proving those who tell them they can’t do it is one of the best feelings in the world.

Growing One Step At A Time

Launched in 2010 by Mathrubootham and cofounder Shan Krishnasamy, Freshworks (earlier Freshdesk) offers multiple products across customer support, IT service management and CRM among several other services, which are also bundled together as Freshworks 360.

With IPO plans for next year, the company has raised $399 Mn from investors such as Sequoia Capital, Accel Partners and Tiger Global. With over 1500 clients, Freshworks crossed $100 Mn ARR in FY2018. Mathrubootham revealed that the company achieved $200 Mn ARR within the next 18 months and is targetting $1 Bn in revenue soon.

Aiming big and then achieving it is one of the constant themes in Mathrubootham’s tale. As he said, “we are only constrained by our thoughts”. As an example, he spoke about how the company took eight years to go from zero revenue to $100 Mn in income and it achieved $200 Mn in the next 18 months. So the jumps are always big but so is the desire.

But that does not mean it comes at any cost. Mathrubootham spoke about offering psychological safety to employees. “We all have to understand employee morale is important, you cannot set unrealistic goals. We have to create an environment where we can aim high, and give make sure the team that is working hard to make them is taken care of,” he explained.

The bigger mistake, according to Mathrubootham, is setting a lower target and not growing fast enough.

This isn’t the first time that Mathrubootham has spoken about the significance of culture and the importance of protecting employees to a large extent. In an earlier chat with Sequoia Capital MD Rajan Anandan, Mathrubootham had said that leaders at VC-funded startups should start focussing on business metrics, but they should avoid pushing the metrics down the throats of all their employees.

“If you push the metrics, it becomes a meaningless run. If everything becomes metrics, there is no joy in it,” Freshworks CEO Girish Mathrubootham said.

Mathrubootham’s dedication towards this ‘responsibility’ can also be attributed to the fact that he is attached to his hometown and the talent he has helped develop here. Talking about the early days at Freshworks, Mathrubootham recalled how several of his investors urged him to move to Bengaluru so that talent acquisition gets easier.

And Mathrubootham entertained the thought — he visited Bengaluru and looked for the right school for his kids and was on the verge of doing it. But then he got a call from an employee’s mother, who was upset that the company wanted to move to Bengaluru. That changed his mind because a company is not just about the employees — it’s also about the larger family.

He had set his heart on building Freshworks from Chennai and decided to build whatever was missing. For Mathrubootham, it was not about finding the “been-there-done-that” talent, but nurturing new talent in Chennai as a conscious decision.

So what does the Freshworks CEO Girish Mathrubootham tell investors who urge him to move to the US? Mathrubootham said he always insists that Freshworks will move when there’s something he can’t do from Chennai.

Over the past several years, Mathrubootham said he has seen investors almost giving up. He was also concerned about how the business might function if he leaves and sets up shop in the US. But in 2019, he surprised investors when he eventually moved to the US for the next phase of Freshworks’ evolution.

Now, he feels he has built a great base in Chennai that can sustain on its own with a capable leadership team, so moving to the US is not just about going there for the sake of it. Now the US makes sense — Mathrubootham is at the helm of a new arc in the Freshworks story as it looks to go public.