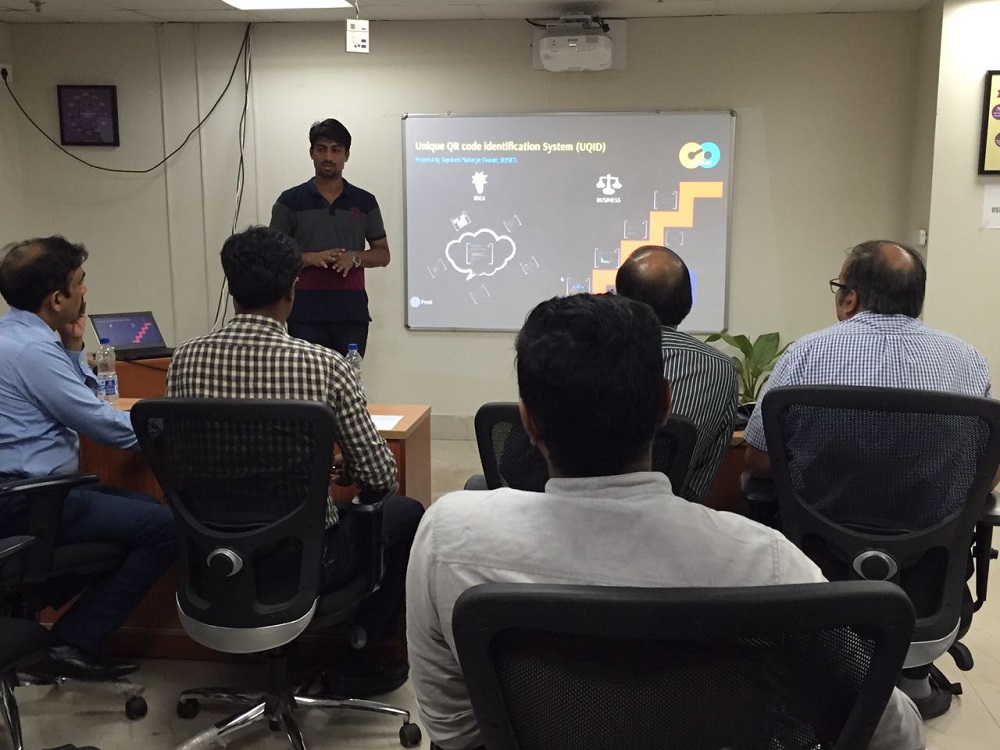 Nasscom 10,000 Startups recently announced TechMarch – an initiative to bring together smart hardware startups driving innovation through a series of events in eight cities.

The next stop in the series was Coimbatore, where the Nasscom 10,000 Startups team reached FORGE Accelerator. They had an insightful and deep dive session on hardware with Intel India executives and Vishwanathan Sahasranamam, Vice President at FORGE Accelerator.

Here Are The Selected Startups From The TechMarch Roadshow From Both The Cities:

Skynet: Based in Kolkata, its flagship product is UQID – a QR code-based door locks system which can be used for hotel rooms. With this, when a guest books a hotel room online, s/he will receive a QR code via email that has a validity period in the range of dates he has booked the room. This eliminates the need to carry swipe cards. The guest can simply show his QR code in his phone/tablet/smartwatch at the door lock which allows him access.

Bleeding Edge: The startup is based in Kolkata and has built a smart helmet with an aim to reduce loss of life during an accident due to delayed treatment. When an accident happens, the helmet will send information to the phone and then the phone will send the location to a relative, the nearest police station, and hospital.

SATARK: Based out of Kolkata, SATARK aims to counter the problem of rapes and molestation cases. It claims to be India’s first product-based approach towards the problem.

Blacro Technologies Pvt Ltd: A yet-to-launch startup, Blacro is working on IoT-based woman and health safety. It is based in Kolkata.

Rootalpha:  Based in Kolkata, it has a real-time navigation in telepresence system to allow a user to watch, listen to anything whenever and wherever he wants to in real-time. Robopuppet is a personal remote avatar which is basically a smart webcam on wheels that a user can control from anywhere in the world using only a web browser or a mobile application.

Gunpoint Technologies LLP: Based in Kolkata, it develops and manufactures innovative gaming equipment for battlefield simulation gaming. Apart from gaming, this technology can be used to train soldiers and police personnel more effectively like in the US and UK.

Smart Agri (Tiino Techmations): Based in Coimbatore, it is a wireless sensor network-based precision agriculture. Agriculture depends on upon weather conditions, and water scarcity has led to a great decline in agricultural output leading to poverty. So the need for more yield in less area while maintaining the fertility of soil has become a major problem for farmers. The startup aims to sort this out and provides smart agricultural solutions to farmers.

VRNEXT: Based out of Coimbatore, this startup aims to provide virtual reality and augmented reality tech products like cost-effective hologram displays for retail stores. VRNext, launched in February this year, has begun testing prototypes of its products.

The finale will be held on October 26, 2016, on the sidelines of National Product Conclave in Bengaluru.

The five selected startups in the smart hardware space will receive mentorship, investment, and partnership opportunities.

As a part of the programme, startups will be provided with technical, marketing, and financial support, and leadership skills to build their applications and businesses. They will also be connected to industry leaders (CEOs, thought leaders, VCs, ecosystem evangelists, social change leaders), and funders.

Furthermore, the winning team will get funding support from partner Kalaari Capital.

Check out some pictures of the event here:

[This article is powered by NASSCOM 10,000 Startups]