Is the Tech Balance of Power Shifting from China to India?

Is the Tech Balance of Power Shifting from China to India? 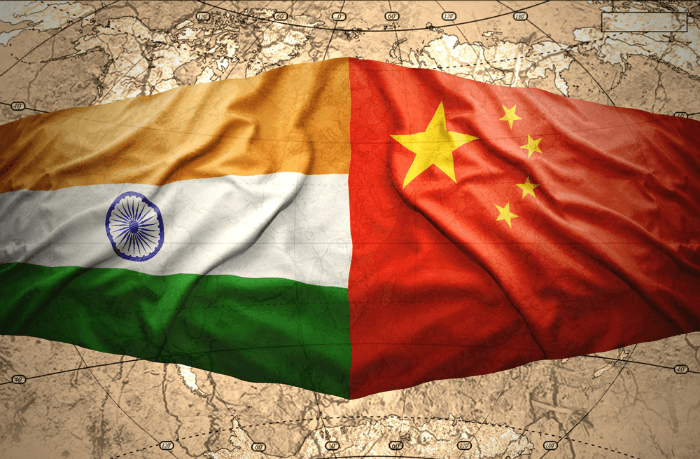 The tech scene in India has witnessed some of the biggest deals in the past few months. Starting off with Flipkart’s $1 Bn funding in July to Softbank announcing that it is putting in over $10 Bn as investments into India. The level of attention that Indian startups are getting has somehow led us to believe that the tech balance of power is shifting within Asia from China to India.

CB Insights recently analysed and compared the data in regard to the tech deals that took place in India and China on the following themes:

Note: This analysis covers through Q3’2014, and thus does not include the Softbank’s disclosure of $10 Bn investment which was announced in Q4’2014.

Here is a detailed analysis:

Though the Indian tech scene witnessed a significant uptake in the funding activities in the past quarter which has reduced the gap between India and China in regard to the amount invested but however the difference is still huge. The Flipkart’s $ 1 Bn round was the most significant one during the year.

In 2014, the funding gap was greatest in Q2’ during that time investments in China were three times more than India. However, in Q3’ YTD, the gap significantly reduced with Softbank’s recent deals in the country. This is further expected to reduce and India might also overtake China in the Q4 for tech investments with Softbanks $ 10 Bn investment and other deals that might also come up. 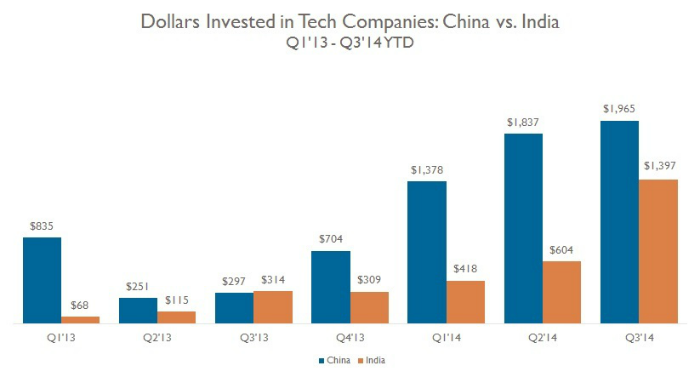 Number of Deals Made

Since Q2’2013 China has consistently seen more deals in the tech sector than India. In Q1’2013, China witnessed 23 deals whereas India was ahead it with over 31 deals. However, in the Q2’2013 China overtook India with 34 deals which rose to 64 Q4’2013. In the last quarter, China saw 78% growth in deals with over 91 deals whereas India witnessed 50 deals overall which is almost half of China. 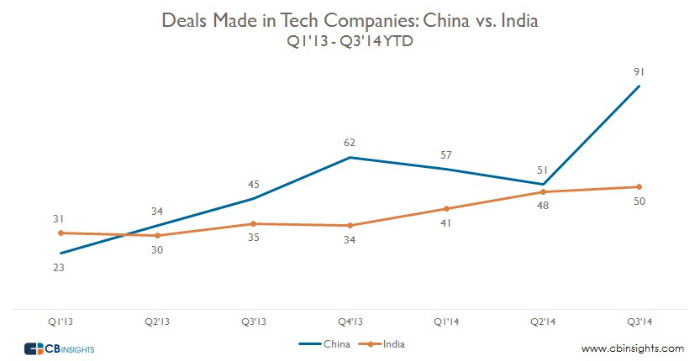 In the context of the Seed/Angel rounds, India has dominates China with 113 deals being made since Q1’2013 compared to the 48 made in China.

However, China largely dominates across the other rounds including Series A through mid-stage. With the Myntra, Quikr, and Snapdeal’s funding, India witnessed slightly more deals in Series E+ rounds i.e. 18 deals which have been just 3 more than China. 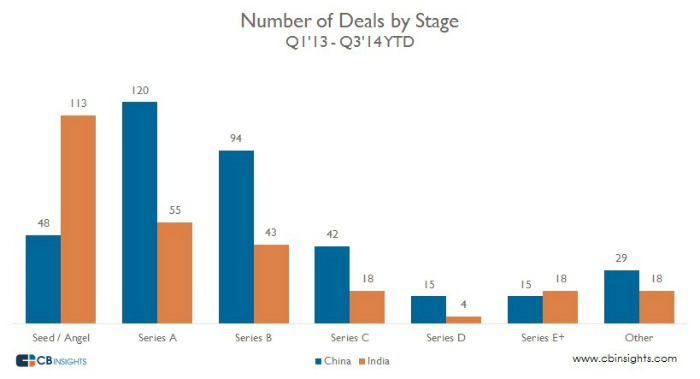 There are over 6 investors who have invested in 131 companies in both India and China. These include:

These startups raised the largest rounds since Q1’13 in each market:

Flipkart – Leading ecommerce firm in India, Flipkart raised a $1B round in a Series G funding from investors including Accel Partners, Tiger Global Management, and Digital Sky Technologies.

Snapdeal – Snapdeal raised a $133.7M Series D round with investors including Bessemer Venture Partners, Intel Capital, and eBay prior to their recent Softbank investment of $ 627Mn. Well, apart from this round Snapdeal grabbed a few more deals in the past few months which also include a funding round led by Ratan Tata.

Checkout: This Is How Snapdeal Grew Into A $3Bn Mammoth

Quikr – Online classified portal, Quikr raised $60 Mn from Tiger Global Management in the last quarter. Previously it had also raised $ 90 Mn in a funding round led by Swedish investment firm Kinnevik in March this year.

Xunlei Networking Technology – Its a file sharing and video download service provider which delivers solutions for broadband users to obtain multimedia content. It raised a $310 Series E round with investors including Morningside Group, IDG Capital Partners, and Xiaomi.

Meituan – Its group discount platform which raised a $300M Series C round from General Atlantic, Sequoia Capital China, and the Alibaba Group.

Wandoujia – It’s an Android app store that allows users to manage their personal data and digital contents from PC, mobile, and in the cloud. It recently raised a $120M Series B funding round from Doll Capital Management, Goldman Sachs, and Softbank Corp.