TeamIndus, The Only Indian Team In The Race, Has Signed A Launch Contract With ISRO To Land A Robotic Spacecraft On The Moon 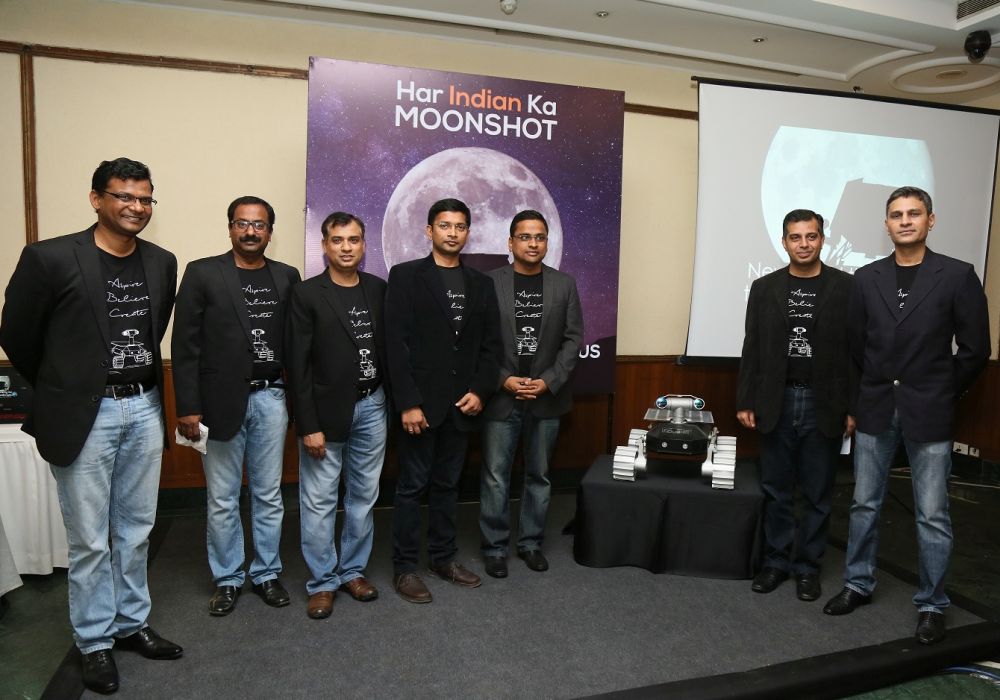 “That’s one small step for man, one giant leap for mankind.”

Uttered by Neil Armstrong, this quote immortalises man’s first steps on the moon. Although 48 years have passed since that epoch-making moment, fascination with Earth’s only satellite has not abated even by the slightest degree. In India, Bengaluru-based startup TeamIndus is gearing up to conquer the moon once again with a rover landing as part of the coveted Google Lunar XPRIZE competition.

To boost the team’s morale and get Indians excited about space travel, an anthem #HarIndianKaMoonshot has been released today. Commenting on the development, Sheelika Ravishankar from TeamIndus’ Marketing and Outreach Department added, “The team is working day and night to win the competition.”

Inspired by TeamIndus’ ambitious undertaking to be the world’s first private mission to the moon, music composer Ram Sampath has written a soulful song, with Sona Mohapatra lending the vocals. The #HarIndianKaMoonshot anthem, according to Sampath, serves as a call for every Indian to “dream big and claim their moonshot.”

TeamIndus, Sheelika revealed, will be conducting a test run next month before the actual robotic launch in March 2018. According to sources, the team aims to complete this mission within seven earth days, where one lunar day is equal to 14 earth days.

Announced back in September 2007, Google Lunar XPRIZE (GLXP) is an inducement prize space contest organised by XPRIZE and sponsored by Google. XPRIZE is an innovation engine, a facilitator of exponential change and a catalyst for the benefit of humanity.

In the competition, privately-funded space technology enterprises will be racing to be the first to land a rover on the moon, situated at a distance of 384,400 km from Earth. As part of the Google Lunar XPRIZE challenge, which carries $30 Mn in prize money, the teams will have to fly their robotic spacecraft for a total of 500 metres on the moon’s surface. They will also be required to send high-resolution images and videos back to Earth.

As stated on the Google Lunar XPRIZE website, “The contest seeks to inspire engineers, entrepreneurs and innovators from around the world to develop low-cost methods of robotic space exploration.”

TeamIndus is the currently only Indian team in the race, competing against SpaceIL (Israel), Moon Express (USA), Synergy Moon (International) and Team Hakuto (Japan). All these teams, according to sources, have secured verified launch contracts as of 2017.

Although he had no aspirations of space exploration, TeamIndus founder Rahul Narayan first came to know about the Google Lunar XPRIZE competition during a video conference, which he attended while working at Agnicient Technologies. A serial entrepreneur, Narayan previously established Axiom Research Labs.

The last day of the competition was December 31, 2010, and the fee for it was $50K. He quickly put together a team which consisted of folks who had no background in aerospace and on December 30, 2010, Rahul finally registered the team.

In an earlier interaction with Inc42, Narayan said, “What gave us the confidence to dream big when we started on this journey many years back, was the heft of the scientific legacy that India, with ISRO, created over decades. This launch contract reaffirms our mission as a truly Indian mission where the best of India’s public and private enterprises have come together to realise a common dream.”

The TeamIndus Spacecraft has been designed and developed in Bengaluru by a 120-person engineering team including a dozen retired ISRO scientists. The startup has so far received support from a wide range of investors including Ratan Tata, Nandan Nilekani, Sachin Bansal and Binny Bansal, Rajiv Mody of Sasken Communications as well as stock market investors Rakesh Jhunjhunwala, Ashish Kacholia and RK Damani.

In December 2014, the IIT-Delhi alumnus founded startup TeamIndus raised funding from investors including Subrata Mitra & Shekhar Kirani of Accel Partners; Vivek Raghavan, Chief Product Manager at UIDAI (the Aadhaar project); and Pallaw Sharma, Director of Analytics at Microsoft, among others.

Within a month, the startup was awarded $1 Mn prize in the landing category of the Milestone Prizes and became one of the five teams which crossed a major milestone. Milestone Prizes honour hardware and software innovations needed to overcome technical risks. Later in December 2016,  Team Indus announced a verified commercial launch contract with the Indian Space Research Organisation (ISRO) for its mission to land a spacecraft as part of the Google Lunar XPRIZE contest.

Soaring Beyond The Challenges To Achieve India’s First Soft Landing

Given the scale of the mission, there are quite a few challenges that need to be solved for a smooth, error-free launch in March 2018. Before the rover can land on the moon, there are a number of tests and evaluations that need to be done to prevent any kind of malfunctioning. One such test is the qualification test, which entails simulating the actual conditions on the moon to test the robustness of the system.

In April 2017, it was reported that the qualification model would undergo testing in the next two to three months. Later on, in July, Narayan announced that the tests were postponed until the second week of August. No further development was reported on the subject. Another area of concern is the soft landing itself. If successful, the mission will be the first time India manages to pull off a soft landing.

Funding is another major challenge that TeamIndus is currently dealing with. To fund a mission of this magnitude, the company was originally planning to raise $65 Mn (INR 400 Cr) through equity sale, brand sponsorships, and public donations. In the beginning of July this year, Narayan told The Hindu, “We are at the halfway mark after completing the equity and [paid-for] payload parts. Now we are working with [consumer-oriented] partners who will be our potential sponsors for this mission and later also.”

Recently, XPRIZE also announced the winner of its Global Learning programme, which is looking to create scalable solutions to enable children to teach themselves basic reading, writing and arithmetic within 15 months. The winner, Bengaluru-based edtech startup Chimple, has reportedly been awarded $1 Mn as part of the contest.

The Google Lunar XPRIZE mission will help India join an exclusive club of nations with proven technology to soft-land on the Moon, thereby opening newer avenues of space exploration for the benefit of all humankind. The anthem, according to Sheelika, is meant to foster a sense of excitement and purpose among the members of TeamIndus before the much-anticipated lunar rover launch.