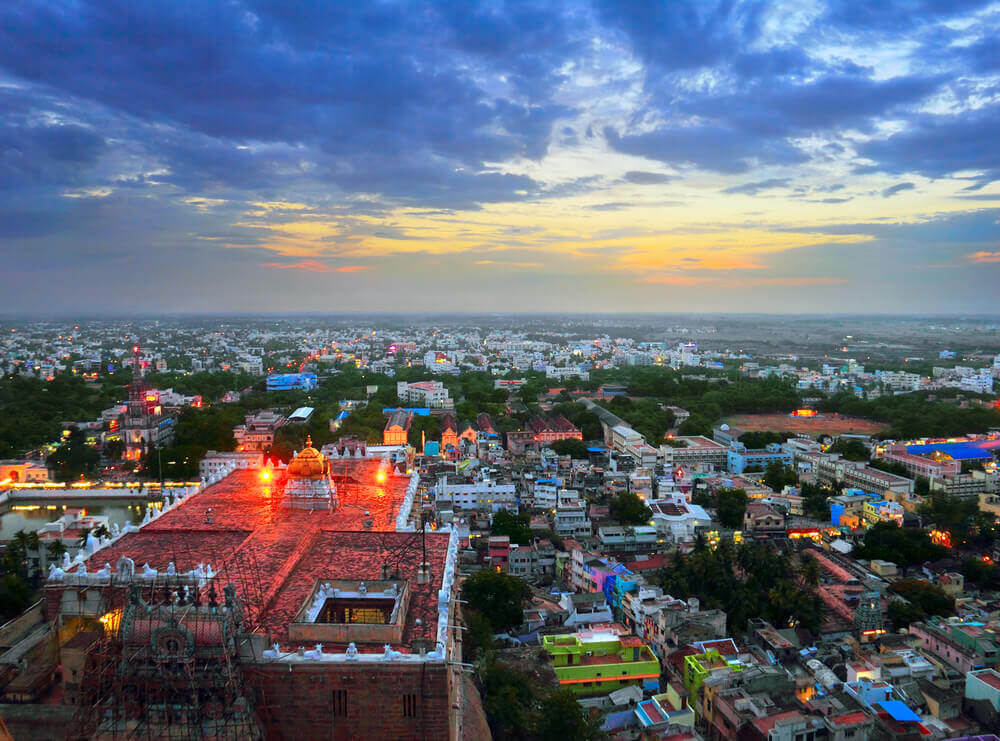 “She is a quaint city with quirky street names…She offers global cuisines on roadside carts, Piping hot idlies at the stroke of midnight… Is it denims,dry fruits or spices you want? Books, electronic or musical instruments? Name it and she will let you have it… She is the modernity that villages lack and the tradition long forgotten by cities.” – Source: YourQuote.in

These few lines perfectly describe Tamil Nadu – also known as the land of temples. The Madras Presidency was established in 1773, while the state of Madras was formed in 1950. The state was renamed as Tamil Nadu (land of Tamils) on January 14, 1969. Since then, Tamil Nadu has graciously embraced both its age-old traditions and new lifestyles. It is ranked as one of the top seven developed states in India based on RBI’s “Multidimensional Development Index” Report 2013, and is home to eight UNESCO World Heritage Sites.

Over the years, the state has also taken significant steps towards digitalisation and has been a forerunner in the IT sector. As part of its proposed e-governance initiatives, a large part of government records and major state government offices have also been computerised.

In keeping with the startup frenzy taking over India, the Tamil Nadu state government is also keen to promote entrepreneurial projects in the state. Recently, the state government revealed plans to set up a $77.4 Mn (INR 500 Cr) venture capital fund to boost the startup ecosystem in the state, reported Hindu Business Line. The fund is proposed to be run with the help of industry experts.

As stated by Mangat Ram Sharma, Principal Secretary, Department of MSME Tamil Nadu, “The State government will provide money for the fund, which can start with $7.7 Mn (INR 50 Cr) or $15.4 Mn (INR 100 Cr) and gradually increase it to $77.4 Mn (INR 500 Cr).” He further stated that, “A global annual sourcing fair on the scale of the Global Investors Meet is being planned to be held in Chennai to provide both domestic and international companies a platform. The department will spend $1.5 Mn (INR 10 Cr) a year on this.”

Tamil Nadu’s capital city Chennai, nicknamed “The Detroit of India,” has been a manufacturing and automobile hub for years and is now emerging as a successful playground for startups too.

The creation of several active mentor organisations like TiE (The Indus Entrepreneurs), CIIE Startupreneurs, IIT Alumni Clubs, and Nasscom’s Million Dollar startup programme, has definitely given a push to the startup ecosystem in Chennai. In recent years, the city has become home to many accelerators and incubators, including PayPal’s incubator and Start Tank. Not to mention the growing funding opportunities, which include Chennai Angels and TVS Capital Funds Limited.

The state has also attracted a series of marquee investors including Inventus Capital Partners, Nexus Venture Partners, The Chennai Angels, Accel Partners, Matrix Partners, Sequoia Capital Partners who have invested in the Chennai based companies. As per an Inc42 report, 70 Chennai startups have been funded between 2014-2016, with a total amount of $467 Mn. About $137 Mn was infused in SaaS startups alone, contributing 30% of the total funding between 2014-2016. In 2016,30 deals were made amounting to $212.12 Mn in funding, as per Inc42 Datalabs.

Notable Startups And Investments In Chennai: 2017

Chennai is the fastest-emerging SaaS hub of India with Zoho, Freshdesk, and Indix already active in global territories and taking on global contenders. Amongst the other well-known names is finance marketplace BankBazaar.com; subscription and recurring bill solutions provider Chargebee; and Caratlane.

As of Q1FY18, funding in Chennai startups has seen a bit of a dry spell with only seven deals taking place, amounting to $8 Mn, as per Inc42 DataLabs. Reports also surfaced about a possible $35 Mn investment by Alibaba Pictures into TicketNew – an online events booking portal founded in 2008 by N Ramkumar, V Sasi Raman and Ravishankar Ramanujalu.

Here is a quick overview of Chennai-based startups/companies who have raised funding in 2017 till April 19, 2017:

Karomi is a global technology solutions provider, with significant focus across two principal industries – Life Sciences and CPG (Consumer Packaged Goods). The company is headquartered in Chennai and the US, with a partner presence in the EU, Latin America, and Australia.

Funding: In March 2017, it raised $1.1 Mn (INR 7.3 Cr) in a Seed round of funding from IDG ventures, Axilor Ventures, Emergent Ventures, Indian Angel Network and others.

PipeCandy is an enterprise SaaS startup, with an aim to help companies discover very relevant prospects in their respective target industries. The startup further aims to provide contextual insights to sales representatives to make authentic and well-researched sales pitches.

Funding: In February 2017, it secured $3.2 Mn in Pre-Series A round from Anil Jain (MD at Refex Energy), HNIs from India, and the Middle East.

Wassup is an on-demand service provider which currently offers services like laundry, dry cleaning, shoes, and bag refurbishments at the user’s doorstep. It has a young team of entrepreneurial professionals in the hospitality, retail, and laundry industry.

Funding: In February 2017, it raised $300K from The Chennai Angels and Freshdesk founder and CEO Girish Mathrubootham.

GoBumpr is an auto services startup which provides doorstep services for car and bikes including general service, wash and repairs. Currently, it is operational only in Chennai and Coimbatore.

Funding: In January 2017, Learntron raised an undisclosed amount of funding in its Pre-Series A round from Mumbai-based Kae Capital.

Learntron caters to the learning needs of both educational institutions and enterprises. The USPs of Learntron’s platform includes the latest learning design principles – like bite-sized learning, social learning, gamification and micro-learning. These USPs have created a solid, feature-rich product. A key element of Learntron is live learning which works in low-bandwidth conditions.

With just $8 Mn raised in funding, Q1F 2017 data does not add Tamil Nadu in the list of burgeoning startup ecosystems like Maharashtra, Andhra Pradesh, or Karnataka. However, the state government efforts to encourage entrepreneurship and empower startups are worth watching out for. As per The Hindu, on the other hand,the state is fighting with challenges such as lack of startup incubators, poor positioning, and funds. But universities and institutes are trying to foster entrepreneurship within their environment hailing over 56% of the incubators.

The growth of startups like Zoho, Zarget, Cloudcherry, Freshdesk and more is proof positive that an ecosystem does exist – but existing gaps need to be mended for exponential growth. The first issue to be solved is to bridge the the gap between startups, investors and other startup ecosystem entities so that ‘Whistle Podu’ Chennai can become known as not just the Detroit or SaaS capital of India – but a formidable, multi-sector robust startup ecosystem in its own right.