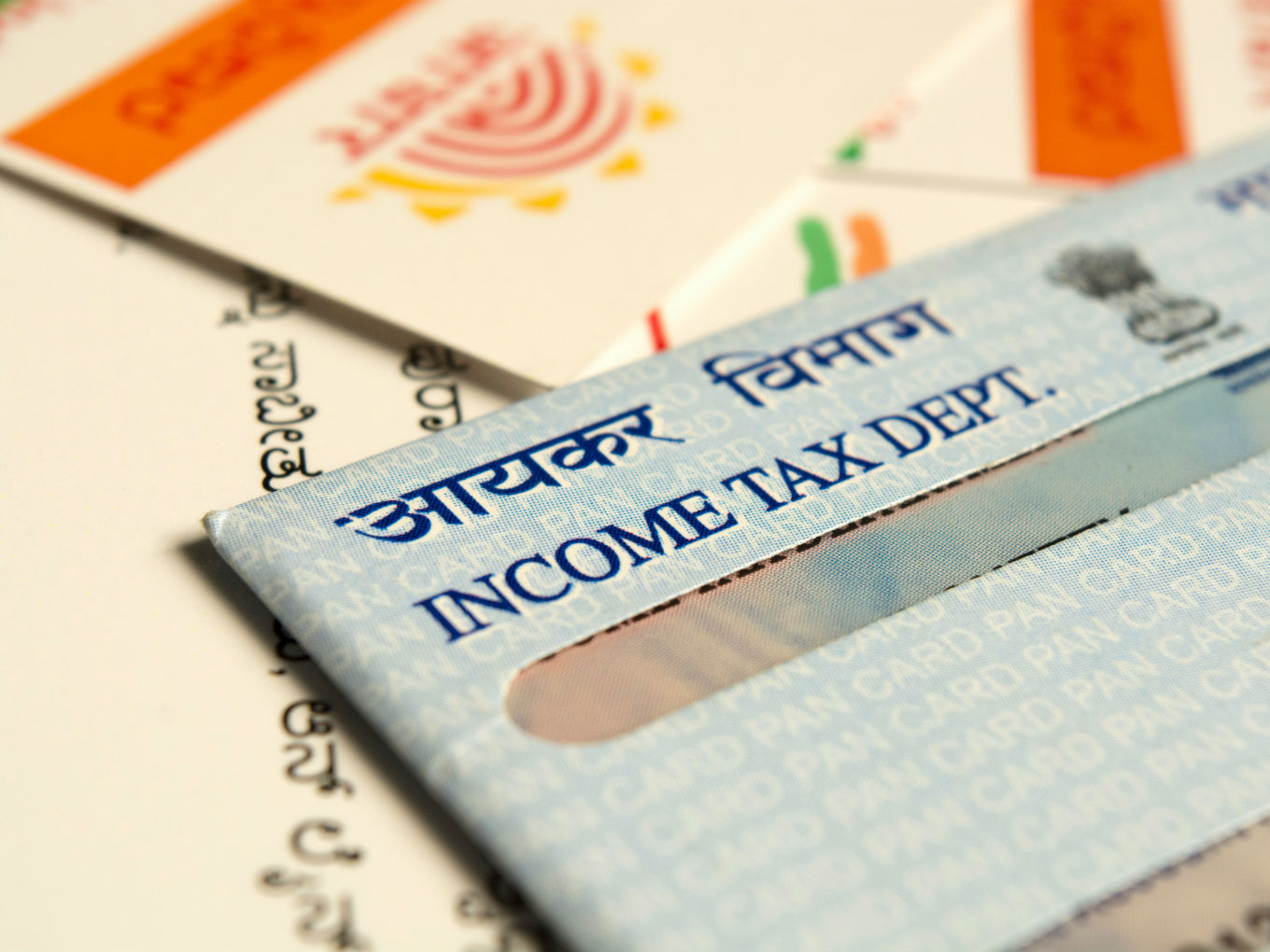 Taking note of the rising discontent from startups and investors over the government’s policies on angel tax, Suresh Prabhu, the Minister of Commerce and Industry and Civil Aviation, responded with a tweet, which said: “We have taken up the issue.”

Prabhu’s tweet was in response to angel investor TV Mohandas Pai’s Twitter campaign against the notices sent by the Income Tax (I-T) department to startups and investors. Despite multiple assurances by the Department of Industrial Policy and Promotion (DIPP) on angel tax, many startups and angel investors are still getting I-T notices questioning investments under Section 56 (II) of the Income Tax Act.

Standing with Pai, Mahindra Group chairman Anand Mahindra, too, tweeted, “I have to admit I didn’t know about this but it certainly goes against all the tenets of #StartupIndia It needs immediate attention or else all chances or building a rival to Silicon Valley in India will be lost.”

This was perhaps enough to bring in Prabhu’s attention. However, it’s implementation that startups and investors want to see on the ground.

The Twitter campaign kickstarted after an entrepreneur and Goodbox CEO Abey Zachariah, on December 17, tweeted: “Startup founders in Bangalore who are getting notices for angel tax, please DM me. A friend may have to shut down his company as he got an angel tax notice. Angel tax is startup killer.” 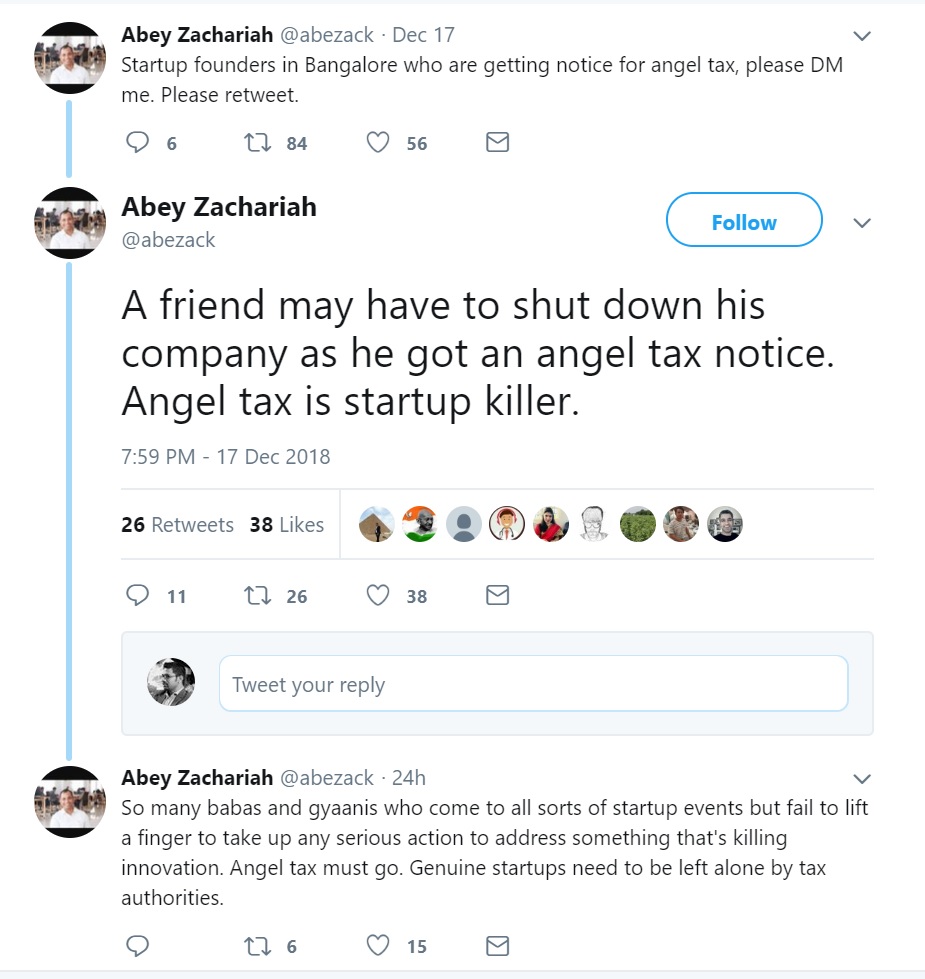 The tweet snowballed into a movement with Pai, Mahindra, Biocon CEO Kiran Mazumdar Shaw, Snapdeal founder Kunal Bahl, entrepreneur, investor Rajesh Sawhney and others demanded that the government take back the ‘draconian’ law.

Pai was one of the first of the industry veterans to take this up. He tweeted: “Draconian angel tax torturing startups: It’s killing genuine innovation. ⁦@PMOIndia⁩ ⁦@narendramodi⁩ ⁦@arunjaitley⁩ ⁦@sureshpprabhu⁩ ⁦@sanjeevsanyal⁩ Sir this has started again in big. Please intervene. Urgent.”

Vinod Shankar, VC at KstartIndia, Kalaari Capital said that he too had received an I-T notice on Friday (December 14).

Raising the concern with DIPP, on December 18, a team from the community-based social media platform LocalCircles met with the Startup India officials and stated that short-term as well as, medium-term solutions were discussed during the meeting and a formal submission will be made on December 19.

Why Is Angel Tax Exemption Ineffective

Angel tax is levied on the capital of unlisted companies from any individual against an issue of shares in excess of the fair market value. The tax has been classified as ‘income from other sources’ under Section 56 (II) of the I-T Act of India.

The Central Board of Direct Taxes (CBDT), in its May notification, said that the provisions of Clause (VIIb) of Sub-Section (2) of Section 56 of the I-T Act would not apply to “a consideration received by a company for issue of shares that exceeds the face value of such shares, if the consideration has been received for issue of shares from an investor in accordance with the approval granted by the Inter-Ministerial Board (IMB) of Certification.”

Even if certain startups fulfil the criteria, it has been very difficult for startups to get approval from the 8-member IMB.

In his Inc42 column, investor Siddarth Pai explained, “The scrutiny notice under section 142(1) for startups will usually have the following queries in some form or the other.

Now, if the assessee offers no explanation about the source of the credit, or, that the explanation offered is not to the satisfaction of the Assessing Officer. This is particularly worrying as the onus of proof depends not on the objective evidence provided but on the ability to satisfy the Assessing Officer as to the veracity of the information, said Siddarth.

The Rising Difficulty of Doing Business For Startups

I-T notices are not the only concern, In November, the MCA has reportedly issued notices to more than 2,000 startups that have raised money since 2013, questioning the valuations at which these startups raised funding. The notices were mostly sent to the startups whose valuations had fallen after the first round of fundraising.

The clarification, issued as a tweet from Startup India handle, has now said that certain GNL-2 forms filed with private placement offer letters were marked for resubmission with a query to justify high share premiums.

In the last couple of years, the number of deals, angel and seed investments which are vital for startups have been continuously on the downside.