D2C cosmetics brand SUGAR Cosmetics, which is operated by Vellvette Lifestyle, reported a total revenue of INR 127.8 Cr in FY21, a 21.6% jump from the previous fiscal year.

However, the increase in revenue looks dim when compared to FY20 when the startup reported an 83% surge in its total yearly revenue to INR 105 Cr.

On the expense front, the D2C startup spent INR 19.2 Cr on employee benefits in FY21, as against INR 12.7 Cr in the previous fiscal year. However, a chunk of its total expense for the year, more than 23%, was incurred on advertising and promotion. 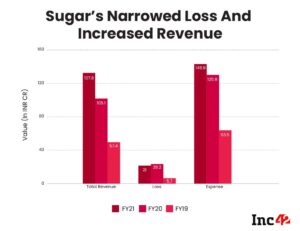 SUGAR Cosmetics spent INR 34.4 Cr on advertising and promotion in FY21, which stood at INR 28.4 Cr in the previous year.

The startup’s miscellaneous expenses, which include spending on packing material, testers and consumables, labour charges and more, also formed a major part of its total expenses and stood at INR 28 Cr in FY21.

IIM Ahmedabad alumni Vineeta Singh and Kaushik Mukherjee founded SUGAR Cosmetics in 2015. It is an omnichannel brand, with an offline presence in thousands of retail stores and retail chains including Shoppers Stop, Lifestyle, Central, Health & Glow and NewU. Its products are also available on online marketplaces such as Amazon, Flipkart, Nykaa and Myntra, along with its own website and mobile app.

The D2C cosmetics brand manages this vast network through its own central warehouse in Mumbai and a third-party logistics warehouse in Delhi. SUGAR Cosmetics competes with new-age startups such as Mamaearth, Nykaa, WOW Skin, Plum, as well as  FMCG giants including Unilever, L’Oreal and Procter and Gamble.

The Vineeta Singh-led startup raised about $21 Mn in its Series C funding round led by Elevation Capital in February last year, as per an Inc42 report. According to a media report, the startup is in talks to raise $75-$80 Mn in a new funding round that would value it at around $500 Mn.

D2C is currently a major booming market with more businesses across verticals such as fashion and clothing, fitness, beauty and wellness joining it. The digital-first D2C companies have gained more traction due to fast product access, safe online shopping and convenient doorstep delivery as the pandemic brought most offline businesses to a grinding halt.

While the number of online beauty shoppers in the country could soar to more than 122 Mn by FY25, the addressable market for D2C brands solely in the beauty and personal care space could also grow to as much as $5.6 Bn by 2025, according to a recent Inc42 report.