Startups And Stories: 5 Entrepreneurship Lessons To Be Learnt From Old Fables

Startups And Stories: 5 Entrepreneurship Lessons To Be Learnt From Old Fables 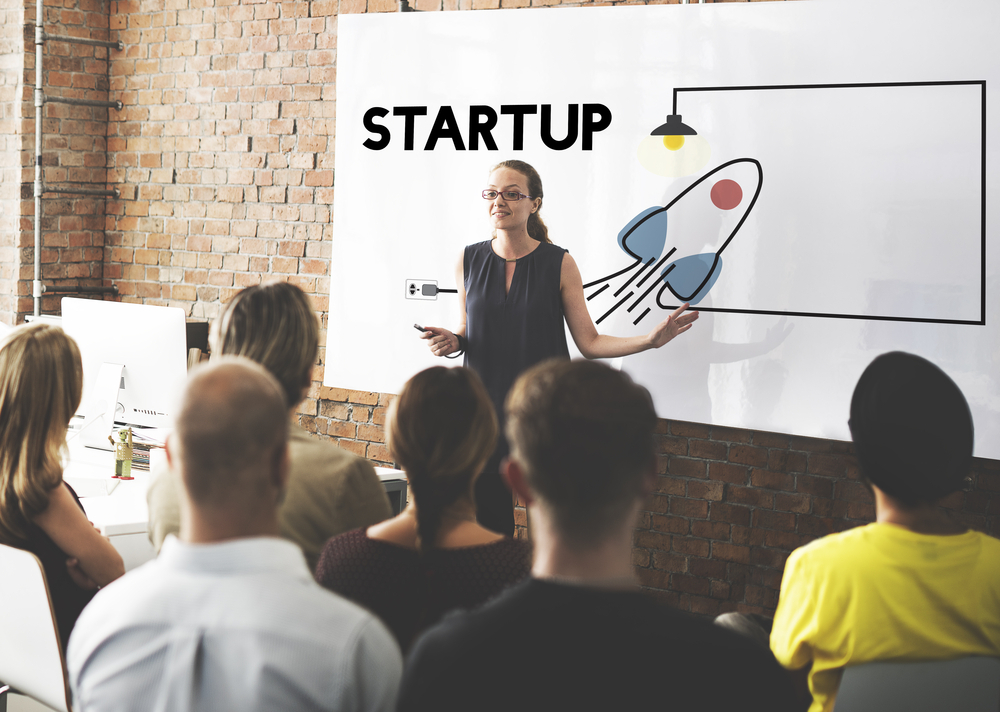 [Note: This article is part of The Junction Series. Sanjay Mehta will be speaking at “The Junction” in Jaipur in January 2017. Get a deep dive on angel investing, entrepreneurship and more with him. Learn more about The Junction here!]

“After nourishment, shelter and companionship, stories are the thing we need most in the world.” ― Philip Pullman

We all have grown up with stories. In the end, the stories that we have heard are the ones that make us, the ones that become a part of us. While these old fables are our initial teachers which also form the foundation of our first moral character – some of them can also be interpreted to learn lessons in entrepreneurship.

Sanjay Mehta, the serial angel investor who has invested in 60+ portfolio companies, and who frequently speaks on entrepreneurship, has employed many of our good old fables to drive home some key lessons to startups.

In a talk with Inc42, Sanjay points out the entrepreneurship lessons startups can learn from the very tales that regaled them in their childhood.

“It’s Good To Be Slow And Steady – But It’s Better To Be Fast And Reliable.”

The story of the hare and tortoise getting into a race with the slow and steady tortoise beating the fast but arrogant hare, needs no introduction. The moral of the story that slow and steady wins the race is driven home by this.

Sanjay reinvents the fable from where after some soul-searching, the hare again challenges the tortoise to a race and wins the race by running all through and not taking a nap. 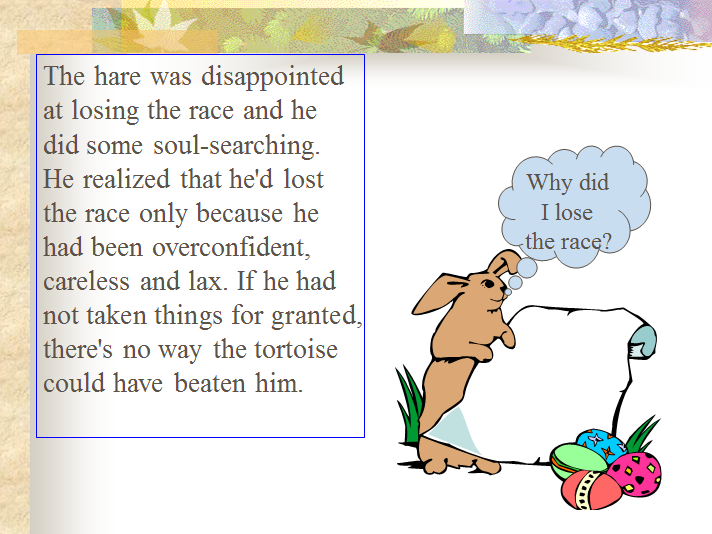 Sanjay points out that the lesson to learn from the hare is -“Fast and consistent will always beat the slow and steady. If you have two people in your organisation, one slow, methodical and reliable, and the other fast and still reliable at what he does, the fast and reliable chap will consistently climb the organisational ladder faster than the slow, methodical chap.”

So while it’s good to be slow and steady; but it’s better to be fast and reliable.

The story continues wherein it’s the tortoise’s turn to do some soul-searching and realise that there’s no way he can beat the hare in the current format. So he challenges the hare to the same race but on a different route – with the finishing line behind a broad river.

So the tortoise is able to win the race, as the hare is not able to cross the river. 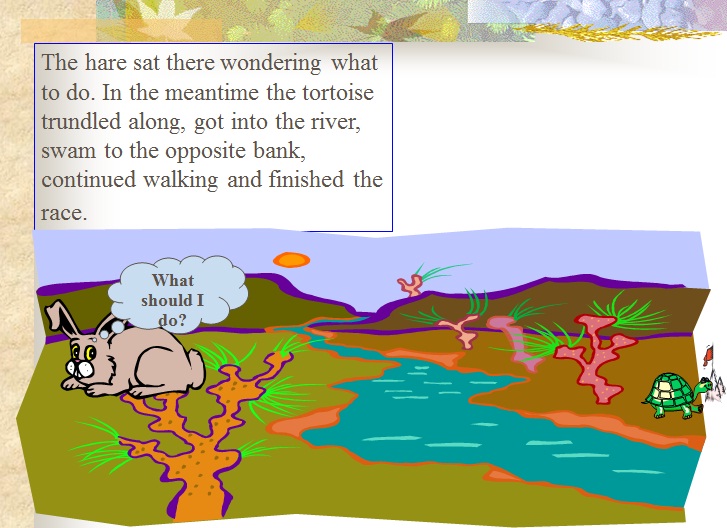 The moral of this part?

Sanjay explains, “Working to your strengths will not only get you noticed, but will also create opportunities for growth and advancement.  So for instance, if you are a good speaker, make sure you create opportunities to give presentations that enable the senior management to notice you. If your strength is analysis, make sure you do some sort of research, make a report and send it upstairs. The idea is to identify your core competency and then win the market through that. And that is why pivots come into picture as well.”

This story does not end here. The hare and the tortoise, by this time, have become pretty good friends and they did some thinking together. Both realised that the last race could have been run much better.

So they decided to do the last race again but to run as a team this time. They start off with the hare carrying the tortoise till the riverbank and then the tortoise taking over and swimming across the river with the hare on his back. Consequently, they reach the finishing line together and feel a greater sense of satisfaction than they’d felt earlier. 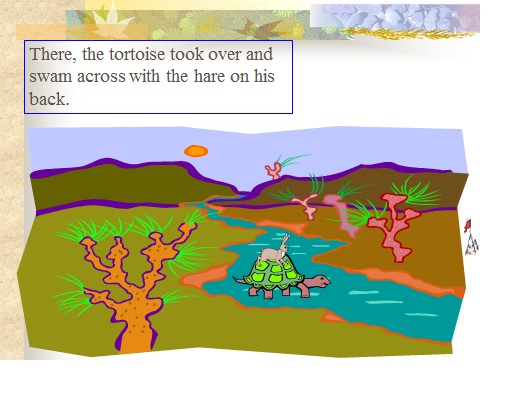 The key takeaway from this?

It’s good to be individually brilliant and to have strong core competencies – but unless you’re able to work in a team and harness each other’s core competencies, you’ll always perform below par because there will always be situations at which you’ll do poorly and someone else does well. 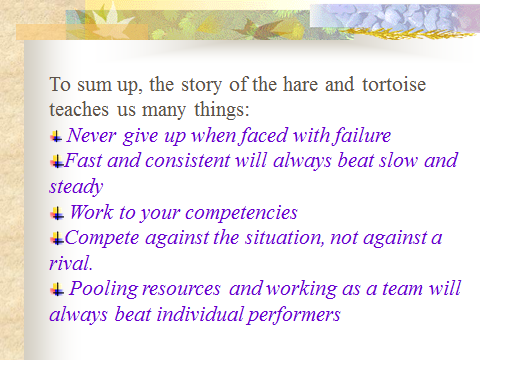 Next is taking a cue from the ant philosophy, where Sanjay points out that the industrious ants are always working hard and never quit even if they face an obstacle. They will look for another way; they will climb over or under the obstacle but keep on finding their way. The lesson they teach is to never quit, always try to find another way around an obstacle.

Secondly, they think winter all summers. They save a lot of food for winters in the middle of summer. Similarly, an entrepreneur should also be prepared for bad times even in the midst of good times. He adds, “It is important to be realistic and think ahead.”

The idea is to stay positive. And prepare for all that you possibly you. So entrepreneurs tirelessly need to work towards success. The idea is to go out all in, always.

To be sitting and doing nothing, you must be sitting very high up. Entrepreneurs have to be continuously in action when starting up. They have to take multiple initiatives.

Or as Sanjay puts it, “As a founder, you can only be restful once you have achieved scale.”

“Even If You Are In Trouble, Do Not Try To Short Sell Your Ideas”

The next narrative which Sanjay alludes to is the bird and the cow story.

A bird was flying in the cold. He fell on the ground in a large field and froze. A cow came and shit on it. As the frozen bird lay in the cow dung, it began to realise how warm it was and sing for joy. A cat heard the bird singing, discovers him in the dung, dug him out, and ate him. 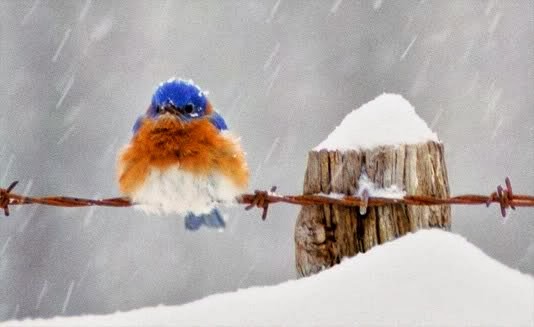 Not everyone who shits on you is an enemy, not everyone who gets you out of shit is your friend, and when you are in deep shit, it’s best to keep your mouth shut.

The analogy for entrepreneurs here is that investors who make you sign the shareholder agreements or ask you tough questions are not your enemies.

When you get acquisition offers for strategic value, these could be companies which may be trying to short sell you or take benefit from you. So even if you are in trouble, do not try to short sell your ideas. Neither should you shout out your troubles. It is advisable to lay low and keep oneself ready for the next opportunity.

The turkey and the bull narrative is one Sanjay speaks about to drive home the lesson of not relying on funding alone to get to the top.  The turkey was unable to get to the top of a tree due to a lack of energy. The bull suggested it to nibble on its droppings which had nutrients.

This enables the turkey to reach the first branch, then some more led to the second branch, and finally it was on the top of the tree. However, when it reached the top, a farmer spotted it and shot it.

The take away from the story being bullshit may get you on the top but won’t keep you there.

The analogy for entrepreneurs being that if you don’t have the product right or the requisite number of customers or positive unit economics, the business is going to fail. While the bullshit is all about the funding and the number of rounds, but you need to create value. You can’t survive on investor cash alone.

So while funding can get you on the top but it is not enough to keep you on the top. Given the current situation of down rounds and falling valuations, this is one fable which entrepreneurs should probably not forget soon!