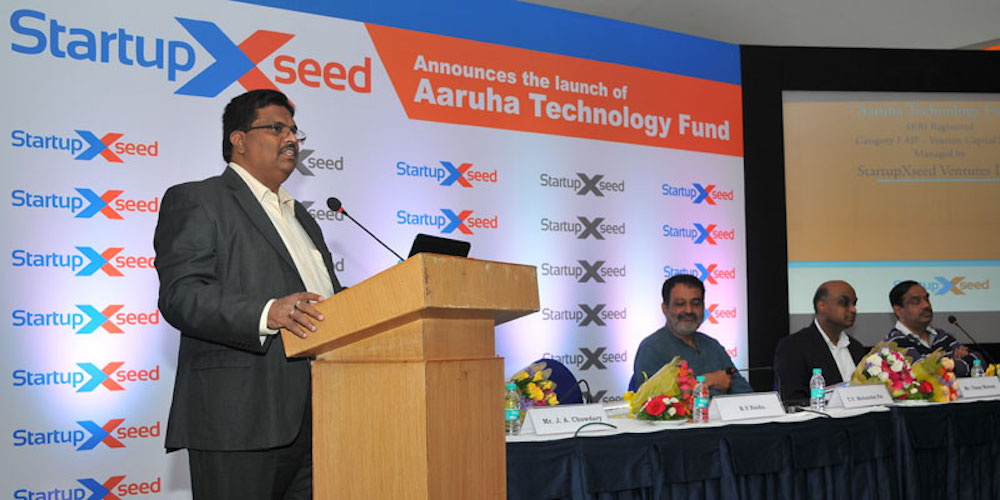 StartupXSeed Ventures is looking to increase the corpus of its first startup fund to $15.4 Mn (INR 100 Cr) from the current $4.64 Mn (INR 30 Cr) by the end of 2017. The Bengaluru-based venture capital firm currently manages Aaruha Technology Fund (ATF) launched in August 2015.

The fund will focus on investing in seed-stage startups, with an emphasis on innovation, IP creation, and disruptive technologies. The sectors in consideration would be security, semiconductor, embedded devices, Internet of Things (IOT), machine learning, and AI product & services. The ticket size will range from $77K (INR 50 Lakhs) to $185K (INR 1.2 Cr).

As B. V. Naidu, Managing Partner at StartupXSeed stated, “In the next six months we are looking at investing in six companies with our ATF fund and our goal for next 18- 24 months is to invest in 20-25 companies.”

StartupXSeed was launched in 2015 by five of the industry stalwarts including – B. V. Naidu, former Director at Software Technology Parks of India (STPI); Mohandas Pai, co-founder of Aarin Capital; V. Balakrishnan, former Infosys Board Member; Ramakrishnan V, ex–CDO & M&A Head HCL; and Ravi Thakur, an entrepreneur and mentor. Except for Ravi Thakur, the other four co-founders are also the acting General Partners for the fund.

Along with financial support, the venture firm also provides strategic support, market access, mentorship, and guidance with its Investor/Advisory Board to the startups. The firm currently has a team of 16-17 startup mentors.

“Our entire mission is to help startups connect the dots, help build an ecosystem, and participate in the process. This unique model of incubation and seed investment coupled with strategic support differentiates StartupXseed from any other current seed fund companies, fostering innovation in the technology space in India. It basically  “hand-holds” in everything from sales to scaling up for start-ups to get venture capital,” said Naidu.

The venture firm has also made several tie-ups with government-supported incubators and prime institutes of the country. This includes:

StartupXSeed further plans to sign partnerships with eight other incubators soon. Also, the VC firm has tie-ups with other VC players like Aarin Capital and Exfinity Ventures to provide future funding to startups after they grow to a certain size.

Aarav Unmanned Systems (AUS): The startup was founded in 2013 by Vipul Singh, Yeshwanth Reddy, Suhas Banshiwala, and Nikhil Upadhye. With a team of designers, artists, developers, and engineers from IIT Kanpur, IIT Bombay, IISc Bangalore & IIST, it aims to build the future of drones and their applications in the enterprise space. The startup’s drones provide high-value engineering solutions to enterprises across GIS (geographic information system) surveying/mapping, industrial inspection and precision agriculture. Based out of Bengaluru, the founders’ goal is to scale globally. Having served key players across verticals, AUS is a leading player of commercial drones in India.

Airwood Aerostructures: Airwood is a full-stack agri production management and data sciences company. It uses comprehensive data instruments such as drones, predictive analytics, and process improvements to uplift farmers and farming as a whole. Based in Chennai, the startup was incorporated in 2014 by Vivek Rajkumar, an IIT Madras alumnus. Airwood operates across nine crops in two geographies and claims to have achieved 30% yield increase across 14 harvests as of January 2016.

Darwinbox: Darwinbox is an HRtech startup which helps companies manage the entire employee lifecycle, making it a one-stop solution for all the technical HR requirements.  The company was founded in August 2015 by Jayant Paleti, Rohit Chennamaneni, and Chaitanya Peddi. All the founders are IIT/IIM/XLRI alums and have worked across companies like Mckinsey, Google, E&Y, and Deloitte before founding Darwinbox. Recently, in June 2015, the startup also raised $4 Mn in Series A funding round led by Lightspeed India Partners and the existing investor group.

SiliConch Systems: SiliConch Systems is a fab-less semiconductor company, established in 2016 having its headquarters in Bengaluru. The founder Vishnu Mohan Pusuluri aims to achieve excellence in pre-silicon design, verification and debug analysis with a high level of customer satisfaction. It was launched in 2015.

While selecting startups, the StartupXSeed team looks for factors such as the background of the founders, market for the proposed startup idea or product, profitability areas and more. The venture fund further ensures to have someone on the team with a strong domain influence in the sector, the selected startup is expecting to scale.

As Naidu said, “We have a strong process framework which helps entrepreneurs to get selected at the early stages under the programme. We only invest in those startups where we have strong domain expertise. We also look at the product/ service whether it has a market or not. Those who do not match our criteria, we don’t take it forward. We at times also tell them why it was not selected, and the reason behind the decision. We also guide them on how to go about it. It’s up to them to take it or leave it.”

During the conversation with Inc42, Naidu also accepted that most of the applications they receive are from Tier I cities. “Companies in Tier I cities are getting funded earlier and obtaining larger amounts of funding. We need to focus more on Tier II and Tier III cities,” he added.

He also believes that the lack of proper guidance and mentorship is one of the biggest problems that exist in the Indian startup ecosystem. As there is immense competition, startups need to scale up fast and this is where funding comes in. While the right management of a fund is of utmost importance, a sensible approach to revenue generation is important too.

There are over 150 active venture capital firms in India – both homegrown and foreign-based. In recent months we saw many prominent VC firms and industry stalwarts closing their big ticket size startup funds with a corpus of minimum $100 Mn. This includes Stellaris Venture Partners, Fundamentum Partnership by Nandan Nilekani and Sanjeev Aggarwal, and New Jersey-based Honeywell Ventures. Also, the Indian government is leaving no stone unturned to boost the startup culture in the country and float as many opportunities possible for nurturing innovation.

As far as seed-stage funding is concerned, new-age startups have been able to attract potential investors. As per Inc42 Data Labs, in the period between Q1 2015 – Q2 2017, $1.25 Bn of funding has been infused at the seed-stage in Indian startups. Unlike the earlier trends of investing at either early-stage or growth-stage, venture capital firms are also coming forward to provide institutional funding to budding entrepreneurs at the idea stage.

However, 90% of startups in India still fail within five years of inception as per an IBM and Oxford study. Lack of adequate mentoring, poor business ethic and inexperienced leadership were cited as a few major reasons for this failure. Just like tinkering labs are required at the school level to inculcate entrepreneurship skills in the young minds, similarly, startups need experienced industry mentors at the idea stage itself to help them avoid mistakes which sometimes could prove fatal in long run.

This is the role of venture firms such as StartupXSeed, Accel Partners, Unitus Seed Fund, Reliance Venture, Blume Ventures, and more, who aim to “hand-hold” startups in everything: from sales to scaling up and raising further funds for growth. Also, with VC firms training their gaze towards Tier II and Tier III cities too, startups in these regions have the opportunity to avail of quality mentorship, support and investment. It is now upto the startup founders to cash in on this opportunity and do justice to the faith shown by funds like StartupXSeed Ventures.