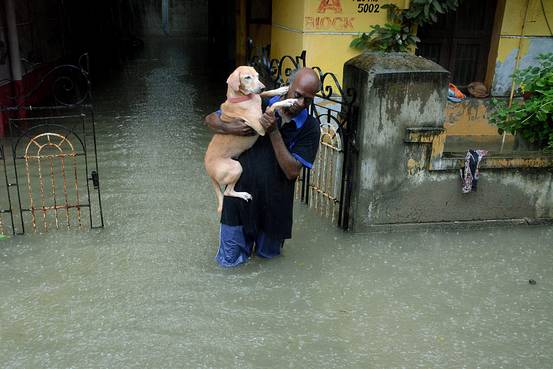 Chennai is deluged with torrential rain and its denizens are in distress.  The rainfall has broken a 100-year record with one day’s downpour covering a month’s average. Many areas in Chennai and Tamil Nadu have been affected due to overflowing of nearby lakes. To add to the woes,  the weather forecast  show that rains will continue for another 72 hrs.

The National Disaster Response Force (NDRF), Army, Navy and IAF have all been put into action. Joining them, companies like Airtel and Vodafone have come forward taking social responsibility and have announced various measures which include talk time credits, free of cost credit and other communication and data services for customers. These companies are offering 50 MB to 100 MB of mobile data for communication. Twitter recorded over 500,000 related tweets in the past 24 hours with hashtags, #ChennaiRains, #ChennaiFloods and now #ChennaiRainsHelp as the focus turns to flood rescue and relief efforts.

In the wake of #ChennaiFloods , we’re taking the following measures to facilitate constant & seamless communication. pic.twitter.com/acEU19REpT

But unnoticed by many, the startup community has also jumped in to provide aid to the affected citizens of Chennai and their innovative efforts are making a huge difference. Let’s have a look at how these startups are helping the affected people in Chennai.

Paytm is offering relief and assistance to the residents of flood-stricken Chennai. To facilitate connectivity, the company has provided a number, 18001030033, on which distressed residents can call and share their mobile numbers for talktime recharge.

Paytm will provide a Rs 30 recharge instantly without charging for it. This has elicited a positive response from Chennai residents on social media. Inspired by the move, many Paytm users came across to help in their personal capacity by offering mobile recharges.

Practo has put together a list of verified doctors and hospitals that people can call and go to. The startup is regularly verifying and updating this list every hour, based on the crowd sourcing inputs they generate through this initiative.

The details are also being shared on Practo social channels like Facebook and Twitter and being sent via SMS and push notifications to Practo consumers as well.

The Practo initiative is also been shared by Twitter India, Uber, Chennai Super Kings, PayTm, Ola, Shailendra Singh, Rohan Joshi, Vir Das and many more organisations and individuals who are doing their bit to help Chennai in this time of crisis.

Lookup has partnered up with youth volunteers and NGO Bhumi to facilitate doorstep pickup of  clothes and other materials to be donated to the flood victims using the chat app. The app can be downloaded from http://lookup.to/download.

The app will enable chat with coordinators of NGO Bhumi. People can share what they want to donate and inform about their pick-up point. 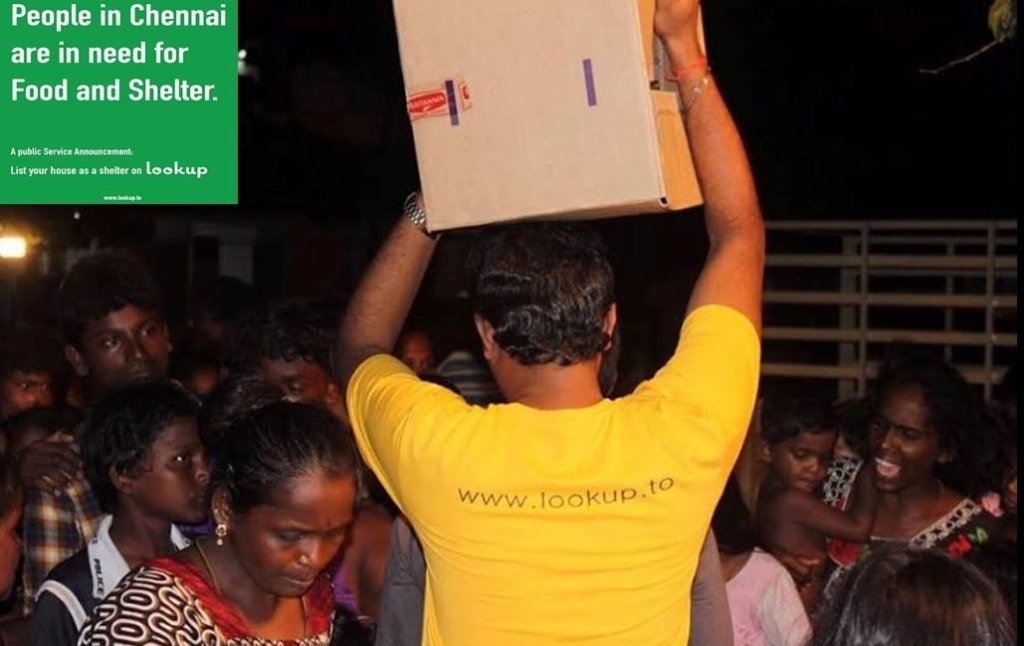 OYO rooms is offering OYO rooms at discounted prices to provide a safe stay for people stranded due to floods. OYO is providing about 15 OYO rooms at at flat INR 799 for single, double and triple sharing.

Moreover, at more than 100 properties across the city, people can book rooms at flat INR 899.

Ola was one of the first to volunteer assistance to the affected citizens of Chennai by deploying boats in water logged and partially submerged areas of Chennai.

#Chennai If you're stuck in rain and need assistance please contact us at 04428294121. We'll do our best to get you home safe. RT#StaySafe

The boats are manned by professional rowers and fishermen and also being used to provide food and drinking water, without any cost, in specific areas which are reportedly short of basic supplies.

It is also providing rain gear to all rowers, which will help them ferry people without any hassles.

Many employees and drivers of Ola are also coordinating with the fishermen on ground to enable smooth operations. Ola is now providing ‘safety zones’ to provide assistance and refuge in Satyanarayana Bhavan in Waltax Road, and Usharani marriage hall in Ambattur.

Zomato has started with a meal relief delivery service. Under the scheme, the company will buy and deliver a meal for the flood victims for every meal a customer buys anywhere in India at zoma.to/chennairelief.

Deepinder Goyal tweeted that after the service was launched, 20,000 meals were bought by Zomato users for Chennai flood relief and with Zomato’s contribution, 40,000 meals have been provided to people in Chennai.

Help get food to those affected by #ChennaiRains. We buy a meal for each one you buy here: https://t.co/YdkHUShX4w pic.twitter.com/956WZg6GuJ

Uber has announced that all rides taken in Chennai would be free on 2nd and 3rd December.

The company has advised people to constantly keep trying to book its service through the app  considering high demand and busy network.

Bounty App is providing periodic updates on social networking sites to communicate important information. It had initially planned to make power-banks available to the affected people in Chennai but had to dump the idea due to logistics.  It has found another way to help people in distress by providing free emergency recharge. People can recharge by giving a missed call on a certain number. Till now the company has got around 1000 missed calls.

Bounty also has come forward by collaborating with an NGO to donate food, dry clothes & medicines. The company is still seeking suggestions through  #ChennaiRains, #ChennaiFloods to help the people in Chennai.

Socialcops is working with NGO Bhumi by providing better data, technology and efficiency in identifying the worst hit areas. This data will be displayed on a live map of Chennai – showcasing affected areas and problems there, the damage done and locating volunteers of Bhumi who can intervene.

UrbanClap is providing pest control services at various locations to prevent an increase in the spread of diseases like dengue, malaria and chikungunya.

Housejoy is offering electrical check-ups, plumbing services, refrigerator and washing machine check-ups, etc. for free.  The service is being offered through a 30-volunteer workforce in the worst affected areas of Madipakkam, Velachery, Pallikaranai, Medavakkam, Adyar, Kotturpuram and Valasaravakkam.

Freshdesk is checking on the safety of their employees via their own internal software. The company is providing breakfast, lunch and dinner for all employees, and has made arrangements for employees who live close by to take shelter at the office.

Freshdesk has also circulated the addresses of employees whose houses have not been badly affected and who have  power and food so that the affected employees can take shelter there.

Zoomcar is providing free pick-up and drop facilities to the nearest hospitals.

Hi Chennai, we are providing free pick up & drop to your nearest hospital. Please call 044-42052772 or tweet us on @ZoomcarCHN. Stay safe.

Besides, if anybody wants to help the people affected by the rain and flood, they can donate articles like clothes, blankets, eatables at the AISC campus, where students are working with three NGOs to help those affected. Or call at helpline numbers to donate food.

You can also help flood survivors by tweeting #ChennaiRainsHelp to offer or request shelter or aid.