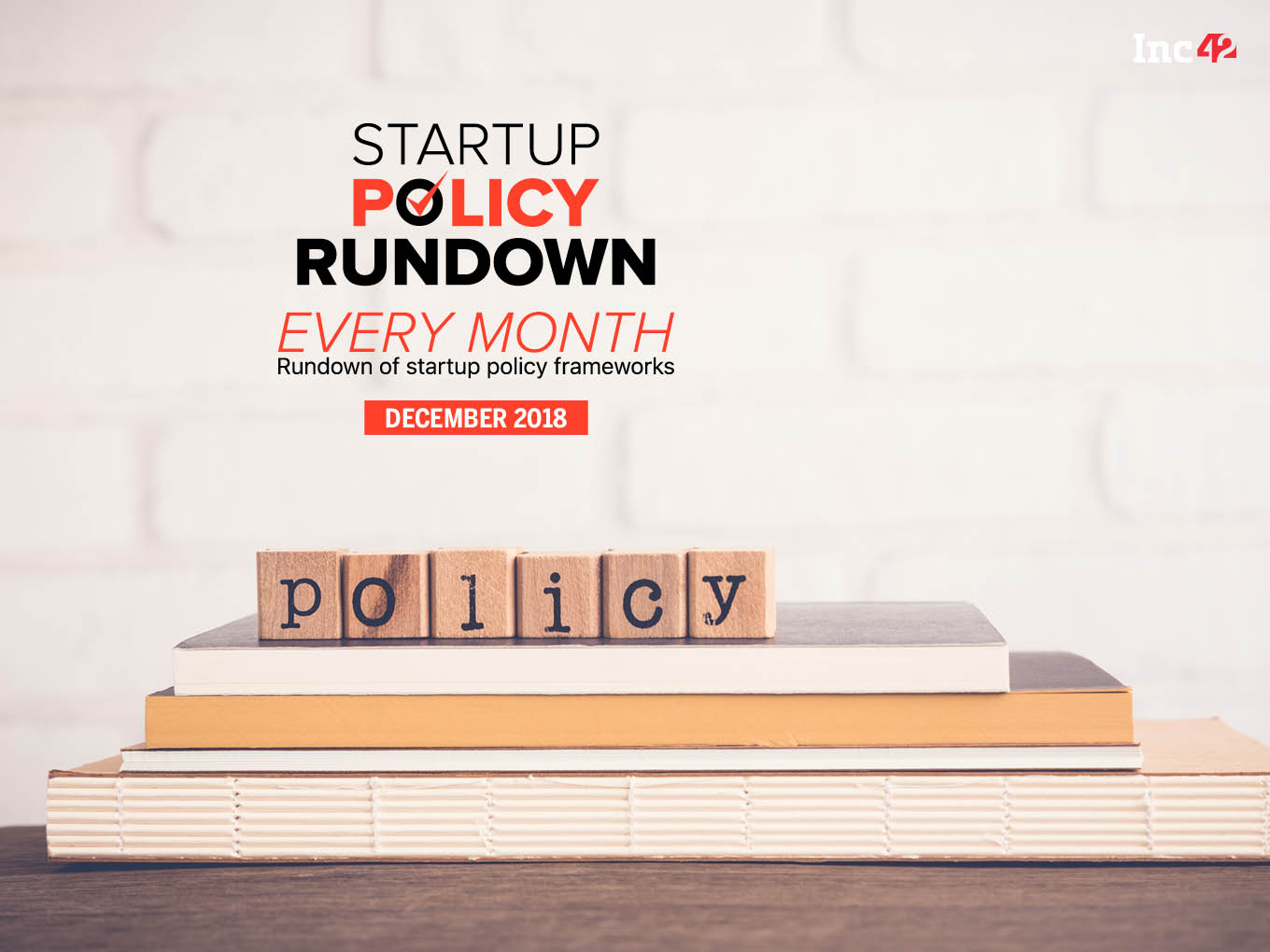 Tis was a season to be merry. Tis was also a season for policy updates. This past month, despite the festivities and the holidays, there have been a host of developments on the policy front. Among the major developments that created buzz in the media and also invited criticism were: the Department of Industrial Policy & Promotion (DIPP)’s State Startup Ranking Report, the Central Board of Direct Taxes (CBDT) notification over angel tax notices and demands, and DIPP’s new circular relating to the Indian ecommerce sector.

Meanwhile, Andaman and Nicobar became the first Union territory (UT) in India to launch its own startup policy. India currently has 29 states and 6 UTs, of which 20 states and 1 UT have launched their state startup policies.

Let’s take a look at the major startup-oriented policy updates from the last month.

On December 20, after months and months of delay, the DIPP finally released the much-awaited State Startup Rankings on basis of the startup policy framework that it had announced earlier this year. The ranking was initially set to be released in July.

According to the State Startup Ranking Report, while Gujarat was rated the ‘best-performing state’, Karnataka, Rajasthan, Odisha and Kerala came in a notch below as ‘top-performing states’.

The DIPP’s State Startup Ranking framework measures and compares the efforts and results of the startup initiatives and exercises undertaken by different state governments. The results, which were announced saw participation from top officials of different state governments and departments responsible for growing and managing the startup ecosystems in their respective states.

The major changes are:

The US-India Strategic Partnership Forum (USISPF) stated that the new ecommerce rules are regressive and that they could potentially harm consumers.

Under these rules, Walmart (which owns Flipkart in India) and Amazon India — both US companies — may be the hardest hit as they depend majorly on sellers such as Cloud Retail, Appario, and WS Retail.

The Andaman and Nicobar Islands has become the first Union territory (UT) in India to launch a dedicated startup policy to encourage innovation and entrepreneurship.

Other UTs such as Chandigarh and Pudduchery are also considering launching startup-oriented policies.

India’s minister for commerce and industry and civil aviation Suresh Prabhu said that the government will come up with a proper mechanism to aid global funds looking to invest in Indian infrastructure and startups.

Speaking to the Press Trust of India, Prabhu said that under the new regulatory framework, foreign investors will face less paperwork and be able to get detailed information about the process.

The announcement comes after several meetings with sovereign wealth funds, insurance funds, and pension funds from countries like Japan, Australia, Canada, Singapore, and South Korea. During the meetings, investors from Japan reportedly voiced their concerns regarding regulatory hassles and the long documentation processes for these funds to invest in India.

Prabhu said that global investors and companies are facing difficulties while investing in India.
Due to this, the central government is considering a more transparent system to aid the global investment process.

He added that a new committee has been set up under the Department of Industrial Policy and Promotion (DIPP) secretary, which will be responsible for exploring ways to make the regulatory processes more lenient.

According to the minister, in order to avoid these problems, Japanese and Indian lawyers along with the government will prepare a set of standardised documents for the process.

According to reports, the market regulator Securities and Exchange Bureau of India (SEBI) is expected to issue the finalised and detailed guidelines on January 20. Following this, startups can start their listing process on stock exchanges.

As many as 15 tech startups are reportedly planning to go public after the SEBI relaxes its norms for startups listing on Indian stock exchanges including the BSE and the NSE.

These startups have reportedly sought guidance from global non-profit organisation The IndUS Entrepreneurs (TiE), Mumbai Chapter, to help them complete the process.

CBDT Not To Take Immediate Action Over Angel Tax Demands

Amid huge uproar over Income Tax (I-T) notices and orders relating to angel tax, the Central Board of Direct Taxes (CBDT) on December 24 issued a clarification saying that no coercive action/measures would be taken as a follow up on the notices issued under the Income Tax (I-T) Act.

Many startups and investors, however, are of the opinion that the notification is too little, too late. They want the government to make some legislative reforms to exempt startups from angel tax.

In a meeting attended by revenue secretary Ajay Bhushan Pandey, DIPP secretary Ramesh Abhishek, and the chairman of the Central Board of Direct Taxes (CBDT) Sushil Chandra, the policymakers said that they would go slow on the I-T notices issued to startups regarding recovery of dues from investments made by angel investors.

It was further agreed that a panel of eminent technical experts from IITs and IIMs would lead discussions on a new framework to recognise startups, including the issue of premiums charged by them on their shares, tax exemptions, and other related matters.

Some states such as Karnataka and Maharashtra have taken further policy initiatives to enrich their startup ecosystems. Karnataka, in partnership with DIPP, organised a Startup Yatra to promote entrepreneurship in Tier II and Tier III cities of the state. Maharashtra, which was hugely criticised for scoring low in the State Startup Ranking, has now geared up for a Maharashtra Startup Week which will focus on paving the path for business-to-government (B2G) collaborations with startups in the long term.

The initiative identifies promising solutions developed by startups all over India and deploys them through the government machinery to address key socio-economic challenges faced by people of the state.