The government is allocating over INR 3.7 Lakh Cr to bailout MSMEs

After FDI, the focus of regulators is now on foreign portfolio investors from China and Hong Kong

Expected to be announced at the beginning of the year, the national ecommerce policy is further delayed 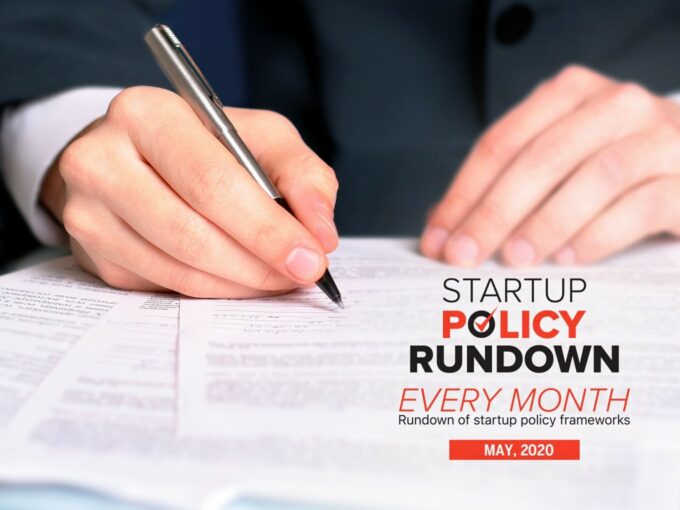 In the last days of May, the Indian government decided not to go along with ‘Lockdown 5.0’, but with ‘Unlock 1.0’ rules as we close in on the halfway point of the year which is already proving to be the worst for India’s startup ecosystem.

With the decision to reopen more businesses, the government has given startups some hope. The latest guidelines have come into effect from June 1 and will be effective until June 30, 2020. The current phase of reopening will focus on the resumption of economic activities and will allow the reopening of malls, hotels, restaurants and places of worship from June 8. This has brought cheer to many Indian startups especially in segments such as hospitality or those having a retail presence.

With this, the DPIIT is looking to chalk out an action plan to attract investments in startups. This might improve India’s global standing while identifying bottlenecks which prevent businesses and high-net-worth individuals from investing in them.

Similar to major economies around the world, the India government launched its own relief package and measures to improve the financial situation of the country in early May.

The overall INR 20 Lakh Cr package, which was initially announced by Prime Minister Narendra Modi and later detailed by the finance minister Nirmala Sitharaman, brought some relief to small businesses and promised to cut costs for businesses

Out of this, the government is allocating over INR 3.7 Lakh Cr to bailout micro, small and medium enterprises (MSMEs). The corpus is expected to provide a boost to many Indian startups as most of them have already registered themselves as MSMEs. Interestingly, the government has revised the definitions of what class of companies can be considered as MSMEs.

However, many have raised concerns that whether the package will really help startups or is it just to show some action. Currently, MSMEs that can qualify for the incentives do not have adequate clarity around schemes such as credit guarantee, collateral-free loans or a fund of funds.

The first part is the INR 45K Cr package launched under the Partial Credit Guarantee Scheme 2.0 (PCGS). The other part is the INR 30 Lakh Cr liquidity scheme. The government also allowed low credit rating NBFCs, HFCs, and MFIs to get a loan from state-run banks under these programmes.

This decision is expected to provide relief to around 6.5 Lakh companies while around 4.3 Cr employees will be able to get 2% more take-home salaries. While that is the ceiling, in reality, the number of that may

India To Tighten Scrutiny On FPIs

After targeting foreign direct investments from land-border countries with extra scrutiny, the central government is looking to tighten norms on foreign portfolio investors (FPI) from China and Hong Kong. Currently, the department of economic affairs is working on a new set of rules for FPIs.

Foreign portfolio investors are often considered hot money as they invest for a short period and exit faster. The government is looking to tighten norms after several FPIs increased their stake in Indian public listed companies.

Currently, most publicly traded stocks in India are dwindling on exchanges, which makes them easy prey for investors. This is attracting foreign FPIs to buy stocks at a lower price and then sell them at a later date at a higher price. The government wants to curb such opportunistic buying, which ends up in value erosion for companies.

IT minister Ravi Shankar Prasad has finally launched ai.gov.in, a one-stop digital platform for all artificial intelligence (AI)-related developments in India. The platform is going to include information on startups, investment funds, resources, companies, education institutions and other resources related to AI in India.

The portal will share documents, case studies and research reports, among other useful study material. It will also host a section for online learning and skill development as well as new jobs in the AI segment.

The national AI platform has been jointly developed by the IT ministry and industry body NASSCOM, which represents business and technology leaders like Microsoft, Intel, Infosys, SAP Labs, Fractal Analytics, Mindtree, Accenture, and Wipro, among others.

The ministry of information technology (MeitY) is working on taking the action plan of the Software Product Development Fund (SPDF) to the finance ministry after a year of its approval under the National Policy on Software Products.

MeitY plans to deploy the INR 5K Cr corpus into at least 50 daughter funds that would comprise of SEBI-registered Category 1 and Category 2 Alternative Investment Funds, by the last quarter of the current financial year. These AIFs will then invest in startups in the software products sector.

The National Payment Corporation of India (NPCI) has revoked its earlier restrictions on eNACH mandate and allowed banks and digital lenders to facilitate recurring payments.

The NACH mandate is an authorisation that consumers provide to institutions to credit or debit funds periodically. This product has been used by digital lenders for cost-effective, paperless collections of recurring loan payments.

Authentication of an eSign user is done through eKYC service, after which an online electronic signature service is facilitated. The NPCI has also asked banks to submit their system readiness as per protocols set by the body so that they can go live with the feature soon after June 1.

To increase the adoption of digital investment and wealth management platforms, the Securities and Exchange Board of India (SEBI) has allowed the use of documents digitally stored in the central government’s DigiLocker application for facilitating know your customer (KYC) processes.

Entities can now obtain documents, stored in DigiLocker, to complete the KYC of investors such as the PAN card, Aadhaar, a cancelled cheque, among other documents for completing their registration.

The Securities Exchange Board of India (SEBI) has advised listed companies to reevaluate the financial impact of Covid-19 on their business after reviewing reported disclosures.

In its circular, SEBI noted that many listed entities have made disclosures under Listing Obligations and Disclosure Requirements (LODR) regulations, primarily intimating shutdown of operations owing to the pandemic and resultant lockdowns.

The government will allow spacetech startups and private companies to use the facilities technologies developed by the Indian Space Research Organisation (ISRO). At the same time, spacetech startups will be able to work on projects such as space exploration and outer space programmes.